Once there was a time, another century, when admission to Notre Dame home football games was free. Of course, fans had to stand on the sidelines, as stadium seating did not exist. But then, neither did a stadium.

In 1897, an intercollegiate football team needed funding for such things as travel and equipment, but the ND team playing in an open field under coach Frank E. Hering was not recouping expenses, much to the chagrin of University President Father Andrew Morrissey, CSC. The students weren’t about to ante up to watch the games, so the budget-conscious Morrissey turned to the alumni for help. 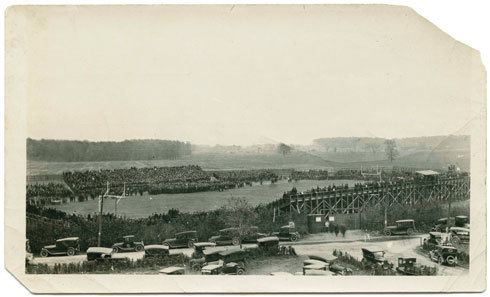 Most graduates who received the written plea ignored it. A few did send money, but it wasn’t even enough to cover the postage for the mailing.

A couple years later, in the spring of 1899, an administrator whose name is lost to history suggested a way to end the spectators’ freeloading: build an enclosed field and charge an entrance fee.

This time, commerce met altruism. After launching yet another plea, one asking specifically for money to buy land and material for a fence, Father Morrissey scored a touchdown.

“I have thought for some time that as Notre Dame was getting so interested in athletics, she should have an enclosed field and have wondered many a time why the question was not taken up,” Warren A. Cartier, an 1887 civil engineering graduate who grew up in Michigan, replied to Morrissey on June 27.

Cartier, the son of one the nation’s first lumber barons, did more than wonder; he took up the need himself. He bought 10 acres on the east side of the campus, and he and his wife, Kate Dempsey Cartier, immediately turned the deed over to Notre Dame. Warren then sent lumber from his company for a fence and grandstand. In response, the University named the new arena Cartier Athletic Field.

A member of the football team and the rowing crew as a student, the devoutly Catholic Cartier was indeed a loyal son of Notre Dame. As a graduate he served for 15 years as treasurer of the Notre Dame Alumni Association and 20 years as a member of the board of trustees. His giving nature was apparently a familial trait. As president of the Commercial & Savings Bank in Ludington, Michigan, Warren’s father, Antoine, paid back all the depositors with his own money when the bank failed in 1893.

When Warren Cartier was elected mayor of Ludington in 1899, again following in the footsteps of his father, who had twice served as Ludington’s mayor, he focused on upgrades. The forward-thinking engineer, a historian for MyNorth.com noted, organized the Ludington Gas Company to fuel the Michigan town, started a phone company for the area because he found Ma Bell’s service sadly lacking and founded Ludington State Bank.

Just as Cartier showed foresight in his planning, Notre Dame decided the new enclosed field should serve the needs of a variety of athletic endeavors: bicycling, track, baseball and football. Later, the large area also came in handy for military drills. The finished grounds contained a baseball diamond, two football fields, a quarter-mile banked track, a 220-yard straightaway and grandstand seating for 500. The May 12, 1900, formal opening of Cartier Athletic Field featured not a football game but a track and field championship tournament followed by a baseball game.

Sportswriters for the University’s then-weekly Scholastic, never known for humility, gleefully reported on the new field’s “glorious opening” success: “Any way you figure it out, it comes to the same conclusion: the championship of the state in track and field athletics is anchored at Notre Dame and seems likely to stay here for an indefinite number of years.” The report on the baseball game continued the bragging: “Hard upon the track team’s masterly victory over Purdue and Indiana, after the Nebraska boys had looked on at a most clever exhibition of skill and endurance, and had seen of what metal we are made, they were treated to a drubbing at the hands of our baseball team. The game was ours from the start.”

For the football team, Cartier Field was a winning home. The Catholics or Ramblers or Fighting Irish — the nickname varied through the years — posted a 23-year winning streak there. The Gipper and the Four Horsemen were among the players who trod the sod of Cartier Field.

Although more seating had been added through the years, and eventually some 26,000 fans could squeeze onto the field’s wooden stands to enjoy the football team’s success, the University heard the pleas of students and fans and began making plans for a new arena to be used only for football. When Notre Dame Stadium opened in 1930, directly south of Cartier Field, the playing surface was grass from Cartier, which had been transplanted there at the insistence of famed football coach Knute Rockne.

That was not, however, the end for Cartier Field. The baseball and track and field teams still called it home. But as the footprint of the campus began to change, so, too, did the placement of athletic venues. Cartier Field was re-established east of the Joyce Athletic and Convocation Center in 1962 to make way for the new library quad. Although Warren had died in 1934, members of his family attended the dedication of the new site, which hosted outdoor track and field events and football practices. The baseball team began to play nearby, in the new Jake Kline Field.

Through the next several decades, as the University added more sports facilities, Cartier’s eventual use was mainly as a football practice field. Finally, in 2008, three new fields called the LaBar Practice Complex opened, and the Cartier Field name itself became history.