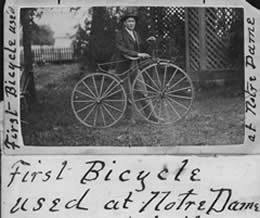 The departure of Schuyler Colfax to Washington, D.C., to assume the vice presidency under Ulysses S. Grant was not the only big news story in South Bend in early 1869. On January 14 of that year, Colfax’s newspaper, The St. Joseph Valley Register, described the dramatic arrival of a promising new invention:

“A velocipede, all the way from France, passed through our streets — in an express wagon — on Monday last. Its destination was Notre Dame, where it will, no doubt, become quite a favorite with the exercise-loving students.”

This bicycle, as we would call it today, was an 80-pound affair composed of a solid iron frame, a suspended leather saddle, handlebars and two wooden carriage wheels, the front one boasting the all-important pedals.

Crude as it was, it had already sparked velocipédomanie in its homeland. Proponents touted the compact conveyance as the solution to the age-old quest for a practical, human-powered vehicle — a clever mechanical horse destined to serve as the “people’s nag.”

The man who engineered this curious acquisition was none other than Rev. Edward Sorin, CSC, Notre Dame’s founding father. In the autumn of 1868, after presiding over the bucolic oasis for nearly a quarter century — during which time the student population had ballooned to almost 500 — he had returned to his homeland for a prolonged visit.

Although he had relinquished the University’s presidency to assume higher duties with his religious order, Sorin was still involved with its affairs. He sought out Bordeaux wine and cigars for resident priests and faculty as well as “premiums” for the students (knickknacks to be awarded at graduation for academic achievements). He was also determined to set up an exchange program with Notre Dame de Ste. Croix in Neuilly-sur-Seine, outside Paris, and a similar program for the young women of Saint Mary’s College.

Shortly after his arrival, while strolling the streets of Paris, he heard a frightening rumble. Wheeling around, he saw a man flash by, straddling a curious contraption. “What is that?” he asked his companion. “A velocipede? I must have one for Notre Dame.”

Sorin’s reaction was similar to that of the Paris correspondent to The New York Times, who had observed the first of these creatures during the 1867 Universal Exposition. Under the heading, “A Revolution in Locomotion,” the reporter marveled how the “scarcely visible” velocipede could eclipse 12 miles an hour, giving the rider “the comical appearance of flying through the air.”

Among its advantages were “great economy of time as well as money,” “immense development of muscle and lung” and the fostering of “independence of character.” For women, it would “force adoption of the bloomer or some other more convenient costume.” For urbanites, it would provide much-needed mobility. “Is it not a disgrace to the inventive age we live in,” the reporter concluded, “to see a man obliged to employ, in order to get through the street, a great vehicle, as large almost as a house? So let us have the velocipedes.”

They were not, however, fast in coming to the United States. Before Sorin’s purchase, American carriage-makers had imported a few French models for study, but most hesitated to undertake production. As a trade journal explained, the proposition was costly, with no guarantee that the maker “could get at it profitably” before the fad faded. Thanks to Sorin’s vision, Notre Dame would become the first American institution blessed with the newfangled bicycle.

On December 10, 1868, Sorin wrote to his students to signal that a prized specimen was on its way to them. “I wish I could have sent a dozen, but my income did not allow of more than this one. That it will be a source of new and great enjoyments, I have no doubt.”

Writing to Rev. William Corby, CSC, then Notre Dame’s president, Sorin elaborated: “Such is the furor of the people about this new invention that I came very near to be obliged to wait 2 months. The price is 250 francs, unpaid, for a good reason, that my treasury is out.”

Corby might well have deemed Sorin’s purchase rash. That sum amounted to about $50, fully a third of the room, board and tuition Notre Dame charged for an entire semester. But Sorin was a man of swift, decisive and unpredictable action. He had, after all, pursued his plan to found a college in the New World before he had cleared the idea with his superiors. On January 11, 1869, Corby demurely replied: “They [the students] are delighted with the idea of having a velocipede. But it has not arrived yet. When last seen it was at Cleveland, Ohio.”

In fact, it would arrive on campus that day. Three priests spent the afternoon trying to ride the bicycle outdoors, to no avail. As one witness noted, “The roads here leave much to be desired.” The students fared little better, trying to tame the “fiery steed” in the gymnasium. Recalled one: “[We] took turns, each one riding until he fell off, and such a fall generally involved a skinned shin. The cautious Father Granger nervously cried out: ‘Watch out! You break zumpsing!’”

A student committee, replying to Sorin, tactfully acknowledged their struggles: “Many thanks for the beautiful velocipede which you have so kindly sent. That it will be the source of immense amusement we have no doubt, but as yet it has not been found.”

A faculty committee also wrote to Sorin: “We rather think that the velocipede is the emblem of the rapid race Notre Dame is to run in the attainment of all that is true, beautiful and good.” Expressing its hope that Sorin would return to the University in time for the silver jubilee that spring, it added, “The only danger is that the reckless swift-footed creature may carry us all to destruction before your return.”

Despite his caprice, Sorin knew the velocipede would give students a much-appreciated outlet. They had demanding schedules, rising at 5 in the morning and studying until 6 each evening, six days a week. As one historian observed, “It was a regimen typical of the French educational practice, designed to keep a student so active he had neither time nor energy to get into mischief.”

Besides, Sorin recognized that the velocipede artfully addressed two topical objectives. First, exercise. As the United States transitioned from an agricultural to an industrial society, its citizens were thought to be increasingly sedentary and deprived of fresh air. Notre Dame had long encouraged its students to partake in sports, notably baseball, but the greater the variety the better.

The other pressing concern was speed, that is, to be fast and efficient. Senior Thomas William Ewing no doubt had the University’s velocipede in mind when he delivered an address to his classmates in April 1869 on the progress of locomotion. Observed the witty Ewing: “We live in a fast age; we talk fast, read fast, break fast.”

Barely a month after the arrival of Notre Dame’s velocipede, the mania had spread across the United States. The New York Times proclaimed, “Never before in the history of manufactures in this country has there arisen such a demand for an article.” American carriage-makers worked around the clock to produce bicycles. Rinks opened in every major city to teach the new art.

Naturally the craze reached South Bend, a bustling town of 10,000 with several carriage-makers, including Studebaker of future automotive fame. Locally made bicycles were displayed in the windows of hardware stores, and Hood’s Opera House regularly hosted races and exhibitions. The Register reported that local boys challenged the Notre Dame students to a velocipede race in hopes that they would be “slowed out of a few greenbacks.” But the newspaper failed to record the outcome.

The true test of the bicycle, however, would play out that spring, when South Bend’s velocipedists took to the road (or the smooth sidewalks). There was little doubt that they could exceed the legal limit of 6 miles an hour, but whether they could comfortably maintain such a clip over long distances remained to be seen.

The Register noted with a hint of optimism, “Those who have tried the velocipede say it doesn’t require any more strength and exertion to run it than it does to saw hard wood with a dull saw.” The Notre Dame faculty, however, found their model neither fast nor bearable. In May 1869, the student magazine Scholastic reported that several members had pedaled “some distance from the College,” but that “nearly every one of them returned limping, wincing, and rubbing parts affected.”

Sorin returned to campus in late May to a tumultuous reception. He must have been pleased to learn how much his velocipede had been ridden, indoors and outdoors. But as the Register observed, interest in the vehicle was fading rapidly:

“The velocipede mania has about exhausted itself here. Only occasionally a solitary bicyclist may be seen wobbling along our pavements, and with the approach of summer, these solitary ones will also disappear.”

What became of Notre Dame’s velocipede is a mystery, but it likely fell to pieces and was cast aside before the arrival of fall.

Sorin, who died in 1893, did not quite make it to the University’s golden jubilee. But he did live to see two generations of bicycles on campus. The first, prominent in the 1880s, was the fleet but precarious “high wheeler” comprised of an enormous front wheel and a tiny trailer. The second was the so-called “safety” bicycle, the prototype of the modern bicycle with its chain-and-sprocket drive and inflatable tires. It at last delivered on the bicycle’s promise to furnish safe, efficient and enjoyable transportation.

Editor’s note: The answer to one important question about Sorin’s velocipede eluded writer David Herlihy during his October visit to campus and the University’s archives, where even a meticulous search for the original receipt proved futile. Exactly what kind of bicycle was it? Herlihy sent the one photo he found of the Notre Dame bike to his expert contacts in the United States and France, and the strong consensus “is that it was most likely a Sargent velocipede, since it strongly resembles several existing models as well as the Sargent patents.” Continues Herlihy, “That would be consistent with Sorin’s statement that the velocipede was made by a ‘large house In Paris’ (though not the largest, which would have been Michaux).” And now you know the rest of the story.

Boston-based freelance writer David Herlihy is the author of Bicycle: The History and The Lost Cyclist, the story of Frank Lenz and his ill-fated round-the-world journey on a safety bicycle in 1892-1894.