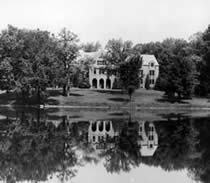 The inscription on the easily overlooked stone pays tribute to the brothers and priests of the Congregation of Holy Cross and marks the spot where Holy Cross Hall once stood. Few passersby stop to read this monument on Holy Cross Hill between Saint Mary’s and Saint Joseph’s lakes, so few current students know that a residence hall once home to hundreds of Notre Dame alumni stood there less than 20 years ago.

But to those who actually lived in Holy Cross Hall, a dorm best known for its isolation and antic-prone residents, it isn’t quite so easy to forget. The Hogs, as the men of Holy Cross were known, referred to the trek from their remote residence to classes, the dining halls, athletic fields and other extracurriculars as “The Walk,” an annoyingly long journey that often tempted many Hogs to just stay home. As Drew Danik ‘75 puts it, Holy Cross hall mates "didn’t go anywhere else by and large," which meant that “guys were tight” and dorm life was “a lot of fun.”

Not that they had much reason other than lectures and labs to leave. The dorm, despite the many structural failings that came with almost a century’s use and neglect, boasted luxuries other residence halls didn’t have, such as a basketball court, a softball field and a kitchen, all left over from its previous life as a seminary.

Few others found much reason to venture out to Holy Cross. When they did, it was often a mistake. Former Hog Joe Donnelly ‘77, ’81J.D., now the congressman representing South Bend and surrounding areas in Indiana’s second district, recalls waking up to a knock at his door from a freshman insisting that he had a class in the room. Donnelly tried to explain that classes were held in the nearby Holy Cross Annex, but the student persisted and eventually Donnelly let him in. After a few minutes the student, ashamed, asked for directions to the annex and left.

The hall’s distant location originally had a purpose. In the 1880s, what would become Holy Cross Hall was built to lodge young men studying for the priesthood, and soon after a floor was added to accommodate the swelling ranks of seminarians. The building would continue to house aspiring priests and Holy Cross leaders like the young Theodore Hesburgh ’39 for another 60-plus years.

The seminary may have been “especially suited for quiet, earnest study,” as the Scholastic phrased it at the turn of the 20th century, but Holy Cross the dorm had a different atmosphere. Leased by the University and commissioned as a residence hall during the same housing crunch in the 1960s that prompted the opening of Grace and Flanner halls in 1969, Holy Cross Hall became the landing pad for self-proclaimed "misfits"—many were transfer students or the sons of South Bend’s working-class families—due to the fact that Holy Cross was the least expensive dorm on campus. For years, Hogs proudly claimed to have received the highest numbers of academic pink slips.

Baseball and beer
In short, the men who lived at Holy Cross Hall knew how to amuse themselves. Danik recalls “lakings” on birthdays, competitive games of “floor hockey,” and a raid against rival Dillon Hall carried out by raft. Thomas Black ‘76, ’08MBA prizes memories of another Hog tradition, “Carry Me Home from the Ball Game”: a regular trip on the South Shore train to see the Chicago White Sox and visit a few local bars that captured the dorm’s partying spirit. Black also deployed the Hog spirit—and the support of Father Hesburgh—to lobby the Indiana legislature to lower the state’s drinking age to 18. He says his cause fell short by two votes.

The Hogs took keen pride in dorm sports. Black says a majority of the close-knit Hogs would attend every intramural contest to cheer each other on. The tradition attested to a unique closeness among the men of Holy Cross and a facet of Notre Dame culture that is itself lost to time.

Holy Cross Hall was closed for demolition in 1990. The largest group of refugees headed for Grace Hall, where two whole sections awaited them. As he watched the destruction on TV, Donnelly says he saw the wrecking ball pass right through his old room.

Demolition aside, Holy Cross Hall—and the brotherhood it forged—lives on. Since 1990, when a group of hall alumni staged an informal gathering after a football game, Danik has helped muster the Hogs every few years. Two years ago attire included Donnelly for Congress T-shirts, as the Hogs once again demonstrated the familial bonds they had developed during their days in Holy Cross.

This year, Danik expected a few hundred Hogs clad in shirts and hats bearing the hall logo—a hog standing atop the Dome—to gather during the Stanford weekend for pick-up football, a pregame tailgater and dinner in the North Dining Hall. The festivities include inductions into the Holy Cross Hall of Fame, reserved for Hogs who “have done something to ennoble the dorm,” says Danik, the selection committee of one. Inductees include Holy Cross priests and the likes of John “Beppo” Guido ‘77, winner of the An Tostal “Ugliest Man on Campus” election three years running. The penny-a-vote contest raised thousands of dollars for Sister Marita’s day care, a local charity.

The Hogs have established another way to channel the spirit of Holy Cross Hall: the Kyle T. Villano Memorial Scholarship Fund honors the son of Glen Villano ‘77 who died in an accident at age 9. Danik says he hopes the scholarship assists students like so many from the vanished hall’s past who needed an extra financial boost to attend Notre Dame.