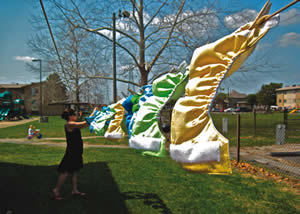 In the spring of 1992, when the acceptance letter from Notre Dame’s graduate school arrived for my husband, Chris looked at me and said: “Well, what do you think?” I executed a silly little cheer along the lines of “Go Irish!” and sat down, overcome with relief. Before the letter arrived, the alternative had been the University of Toronto. While Toronto may be a vibrant city, it is an expensive vibrant city. “If I have to endure harsh winters while my husband earns his degree,” I told my mother, “I’d like at least to be able to buy a coat.”

For each school to which my husband applied, I made it my business to know how and where we would live. Notre Dame, I discovered, offered the cheapest accommodations for students who were married with children. Our monthly rent for the first year was to be $190. This seemed like excellent news. But, of course, though people like to joke about graduate school being a time of suspended reality, the principles of economics are never suspended. In grad school, as in life, you get what you pay for. We soon discovered that our money secured us a mere 500 square-feet of real estate, all of which, to my horror, was subterranean. It was both appalling and, considering we had no money whatsoever, appealing.

Even if we could have afforded Toronto, the thought of surviving in a big city was frightening. In those early days of marriage, when we barely knew each other and every moment was infused with equal parts fear and adventure, Notre Dame’s University Village, with 103 apartments housing about as many young families, seemed to offer the emotional security of a close-knit community.

We arrived on a scorching August day to take up residence in Building A. We brought with us our dishes, our newborn daughter and the realization that this was it. With an intensity similar to that of our wedding day, moving day felt like a beginning, so we did what everyone does when they begin a new life: We bought furniture — a futon, two small dressers and a table. I made shelves out of cinder blocks and plywood. Chris found a nook into which he could build a desk. And I happily discovered that I could vacuum our entire apartment from one outlet.

Eager to meet people, I wandered the corridors and shared this news with other new families. Within a week, we had made friends and were somewhat settled. We soon learned that the men of University Village talked mostly about football, dissertations and the job market, while the women traded stories of pregnancy, childbirth and breastfeeding. This was interesting, because at least half the women I knew were also pursuing advanced degrees. They could have conversed thoughtfully on their education. But when we were together nothing seemed more fascinating or, perhaps, more precarious, than our families. We were young, healthy, arrogant and terrified. As a sort of comfort against such overwhelming potential, we huddled together and tried to figure out what the hell we were doing.

Had we been smart, we would have looked to the international students and their families for instruction. The Latino families seemed to be having an absolute lark. They played soccer on Sundays and held elaborate picnics. The fathers threw their toddlers into the air with such vigor that I winced, while the mothers simply flung back their heads and laughed — balancing themselves on 5-inch heels. Some Chinese students seemed equally resourceful, taking “family housing” literally and squeezing three generations into their tiny apartments. These families never complained, but instead quietly cultivated bountiful gardens in the field next to the parking lot.

The “alternative/progressive” American families also appeared to be faring better than we. They supported the local farmers’ market, eager to find organic foods for their children before the rest of us knew what that meant. They exuded a confidence that all would be well — that life was a great joy and a great mystery. They didn’t seem to waste even a passing concern on disciplining their children, instead viewing childhood as a fascinating psychological process not to be disturbed.

It was only us uptight, white, middle-class Catholics who were beside ourselves with worry. In general, we seemed to fall into two camps. Some of us wives fought with our husbands, pouted, moaned about finances, yelled at the kids and made a general nuisance of ourselves. But those of us who chose that route also kept tidy homes, subscribed to Bon Appétit, wore flattering clothes, and, when we weren’t complaining, made our husbands laugh with our quick wit. Our husbands, afraid to come home without evidence of having accomplished something every day, worked hard and finished their degrees on time or sooner.

Other women were models of feminine virtue, attended daily Mass, spoke in whispers and could breastfeed a newborn and a toddler while homeschooling a 5-year-old. But, as wholesome and devoted as they were, they kept cluttered homes and wore special “nursing tops.” Sackcloth and ashes could not have been more penitential to me than those loose-fitting tops with their “subtle” vents. Also, their husbands, made comfortable by so much nurturing, tended to linger in their homey apartments and neglect their dissertations.

We were all deeply insecure. We confessed everything, often wildly inappropriate things, to each other in the hope that someone would second our concerns or admit to the same sins. The progress of dissertations and pregnancies was common knowledge. Failing out of school was a real possibility — many did — and failing as a parent was an everyday occurrence. To guard against both, we took extreme measures. When told to “redouble” his efforts in order to pass the Latin exam, my husband flew to Rome to study under the pope’s own Latinist. And when my daughter still wasn’t speaking at age 2, I simply lied and told people she was.

Everything had the potential to undo our carefully planned lives. One mother was so fearful that her children might go astray, she literally carried a wooden paddle with her everywhere she went. It was bright yellow and hung by a tether from her waist. “It’s a visible reminder for the children to obey,” she told us. And they pretty much did, those children. I thought she was nuts. But I also understood her desperation — and her need for experimentation. Eventually the paddle was replaced with verbal commands, and if she turned out to be anything like me, those commands eventually gave way to sighs of resignation and smiles of recognition.

Of course, the stress often overflowed into our young marriages. Fights were common — and sometimes unwittingly public. One winter day, in an effort to show how mature we were, my husband and I offered to babysit for our next-door neighbors. “Go out!” we encouraged. “Enjoy some time together,” we said, feeling terribly magnanimous.

I don’t remember how it started, or what it was about, but less than an hour before we were to be entrusted with this couple’s children, Chris and I had one of the biggest, loudest, most grievous fights we’d ever had. We stood toe-to-toe in our kitchen screaming at each other until the phone rang. “Hi,” began Mark from next door, in a voice that clearly said: “Don’t mind me. Your marriage is your business, but these walls are terribly thin.”

“Listen,” he actually said, “Claire and I have decided to stay in tonight, but, hey, thanks for the offer.” We didn’t leave the apartment for a week.

By coincidence — or maybe because we’d been louder than we realized — Notre Dame organized a talk on the stress graduate school imposes on marriage. It helped simply to have it confirmed. We learned how to alleviate stress by exercising and making time for each other. We role-played. We prayed. We were given the numbers of counselors and encouraged to seek help if we should need it. “This will pass,” they told us. “You won’t always be living on 10 dollars a day in 10-degree weather.”

Parenting classes were also offered, as was a Sunday Mass in our community center. At those Masses, babies could nurse, toddlers could roam, pregnant mothers could sit, and fathers, so young and with so much responsibility, could feel brave enough to face one more week of classes, dirty diapers and bills.

When Chris and I finally did re-enter society, we were determined to never publicly humiliate ourselves again, but we were also the tiniest bit more patient with each other. We were a fraction more loving. The classes helped, but so had talking to friends.

And that was the real gift of the Village — simply that it existed. With so many of us living in such close quarters, it was something of a hothouse. If your family was struggling, there was always another just a little bit stronger planted nearby. In time, we grew taller and stronger, too. All the while we were safe. Our greenhouse protected us from the harsher elements of the world, like stressful commutes and the depressing isolation new mothers often face, and allowed us to flourish in relative peace.

We did grow — up and out of the Village. The children who were babies then are in college now. For most of us, our fears were unfounded. Our children are pretty much okay. Some of them attend Notre Dame. We were neither as good nor as bad as we thought. I imagine the families who now inhabit the Village will someday discover the same thing.

Jennifer Kaczor, her husband, Chris, and their seven children live in Los Angeles. Chris completed his doctoral degree in philosophy in 1996.