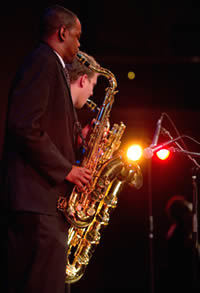 I’m standing in the LaFortune Student Center in that reverberant hall underneath the windows of the old ballroom in late January, when everyone and everything on campus is buttoned up against the cold.

In walks Sy Doan ’10, student programmer of the Collegiate Jazz Festival (CJF), who has all the professional poise of a well-suited jazzer in New York City. Doan is a young guy, but it’s as if the whole 52-year history of the festival just walked up to me and put out its hand.

The CJF is the oldest festival of its kind in the country and started on a similar gray day. In the late 1950s, a student named Tom Cahill ’59, feeling the blues falling around his fellow Irish, hit on the idea that maybe what the campus needed at that time of year was some new energetic music, some green burst of spontaneity. Maybe some jazz, new jazz by students, maybe a competition.

This was a radical idea. There was no jazz program at Notre Dame at the time. There weren’t full-fledged college jazz festivals anywhere. Jazz on college campuses was a rare bird. In staging a festival like this, Notre Dame would be far out in front of the rest of the nation, an innovator, a risk-taker in the Midwest.

This was also at a time when America’s cultural balance was felt to be especially precarious. It was 1959, the Civil Rights Movement was in full swing, the Cold War was getting hot. The elegant sophistication of swing was about to be displaced by the urgent new rhythm of rock and roll. Serious young musicians like Ornette Coleman, John Coltrane, Miles Davis and Dave Brubeck were charting radically new directions in melody and rhythm, and they weren’t just playing around. They were issuing clarion calls and starting maiden voyages that would sail in new, unfamiliar directions.

Notre Dame opened its ears at precisely this moment. The idea of an integrated collegiate jazz festival spread like wildfire. Cahill and Bill Graham ’59, the student body vice president, took the South Shore train to Chicago, pitched the idea to the influential editor of DownBeat magazine, and suddenly found enthusiastic external connections, attracting to their Board of Advisers the likes of Leonard Bernstein, Benny Goodman, Stan Kenton and Duke Ellington. Such manufacturers as Selmer, LeBlanc and Zildjian gave top-of-the-line instruments as prizes. Winners were offered high-class gigs at top jazz clubs like The Blue Note in Chicago and had their performances pressed into vinyl. Winners even went on U.S. State Department tours of Europe.

Seizing the opportunity, jazz ensembles formed in colleges nationwide and applied en masse. In a few short years, the CJF at Notre Dame was a national phenomenon.

Judges lined up to participate and represented a Who’s Who of the jazz world: Bill Evans, Cannonball Adderley, Herbie Hancock, Dee Dee Bridgewater, Ray Brown, Quincy Jones, Roberta Flack, Wynton Marsalis. The list goes on and on. Just meeting them would be any jazz fan’s dream — but to organize an entire festival with them, to hang out with them, to play with them?

“It gets interesting,” Doan, a piano player, says with a cool smile. “At a lot of music clinics, judges tell you a lot of technical things, like what saxophone mouthpieces they use, how you can substitute one chord for another, and so on, but at Notre Dame, the education is holistic. They get into the zen of jazz. That’s what sets our clinicians apart.”

After a few minutes, we’re joined by Larry Dwyer ’66, director of Jazz Studies at Notre Dame and two-time winner at the CJF for Best Trombonist. He listens to what Doan is saying, waiting to leap in. He begins a chain of anecdotes about what it’s like to be a student jamming with world-famous jazz masters. “Terrifying,” he says grinning. “I was once asked to play piano with the judges at their after-hours jam. They took a quick poll of what tunes to play.” Then he shrugs. That was it. Did they agree on a key to play them in? An order for soloists? “No,” says Dwyer. “That was the whole rehearsal.”

The experience of making complex, enjoyable music is exhilarating because of this risk. Learning how to deal with it, right in the moment, when your participation is vital and everyone is looking at you, is a challenge. Dwyer recounts his experience of playing at the CJF with trumpet legend Clark Terry. “Oh man, on one tune, it was a blues, he’d come up with a little background melody, which I’d then harmonize on my trombone.” Simple enough, I say, feigning nonchalance. Dwyer smiles. “Every 12 bars, at a fast tempo, he’d come up with a new one.” This kind of informed and inexhaustible creativity is the essence of jazz, and listening to musicians who do it well is like listening to where life itself comes from, moving in and out of being in one creative, interpersonal act.

Dwyer, Doan and all jazz musicians love this challenge. “You’re on the creative edge at every moment, and you can fall off.” Fall where? Into selfishness. Banality. Awkward silence. “Listeners can tell,” says Doan, and Dwyer leans in for emphasis. “The key is listening,” even for improvisers as skilled as the judges who come to Notre Dame.

What is so valuable about the CJF is that students can listen extensively not only to each other but to such seasoned professionals as Gene Bertoncini ’59 and Jeff Clayton, a saxophonist who has played with Ella Fitzgerald and Stevie Wonder. “We share as much as we can,” Clayton often says. Judges give advice to students immediately after students perform, going into great detail for 30 minutes and covering everything from tone, precision, balance, dynamics, improvisation and rhythmic feel.

I venture the idea that it all sounds rather technical. Does this mean the CJF is music for musicians only? There is a pause. Doan looks at me like I’ve started a solo in the wrong key. “It’s so accessible!” he exclaims, surprised. “Everybody should be able to relate to it and have fun. . . . The students in the audience see their peers giving their all, playing with a lot of energy and passion. It’s not that different from an athletic event. I think that’s why the CJF sells out every year.”

The festival’s reach is also international. This year, the University of Western Ontario is stepping up, and who will come next? And from where? “It’s always evolving,” Dwyer says with admiration. “And the judges love it because it’s student-run, which gives it a spontaneity, joy and freedom they don’t find at other places.”

The music can hardly be said to be obscure or musicological. Doan nods vigorously and says he could talk all day about where jazz is headed. “It’s not some separate genre anymore,” he explains. “People are covering Radiohead tunes, playing on all kinds of records from rap and funk to contemporary R&B and ambient music. Jazz has always done this — think of all those Broadway tunes that became jazz standards. We’re at our best when we expand the boundaries of what is jazz.”

We look at the dining room around us, packed like a hothouse with students and faculty in every subject area, from nearly every state in the country and beyond. The same channel is on the television, but the sound is off. Dozens of students are listening to their iPods in personal silence.

Doan is saying “What we need is more exposure.” What about pick-up jazz throughout the year? The way things used to be after hours at famous jazz clubs like Minton’s? Doan picks up the idea and nods. “I’d like to organize something in the basement of LaFortune.” Dwyer, who has been around, smiles and talks about local players. I suggest the ground floor of Washington Hall, with windows open when the leaves are green.

The ideas are just warming up, but we have to go. Soon enough, the outside temperature will rise as it always does, a few birds will return to the trees, and the Collegiate Jazz Festival jazzers, playing melodies yet unheard, will presage the springtime chorus.

Anthony Monta serves as the assistant director for academics at Notre Dame’s Nanovic Institute for European Studies. Before coming to ND in 2007, he worked in higher education administration in Louisiana and has played jazz in New Orleans.

See Big Noise from Notre Dame (Notre Dame Press) by Joseph Kuhn Carey ’79 for a splendid history of the festival up to 1985. All past festival programs are archived online.