Notre Dame once had its own railroad. Tucked behind the University power plant and crossing Douglas Road twice on the northern edge of campus, the Notre Dame & Western or ND&W ran from 1902 into the 1990s.

The ND&W provided a rail connection to the outside world via a spur track that came off the New York Central (NYC) Niles Branch line and curved east, crossing U.S. 31 and paralleling Douglas Road. 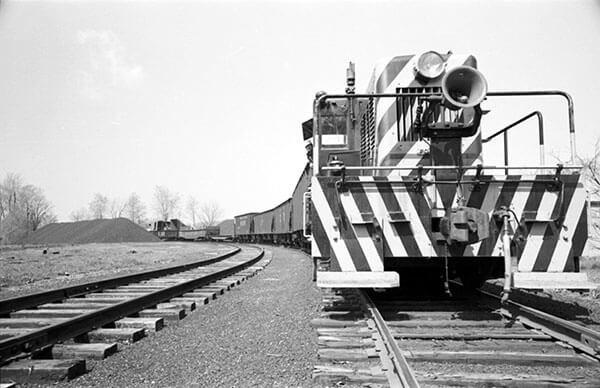 In the November 8, 1902, issue of The Notre Dame Scholastic, the construction of the branch off of the Michigan Central subsidiary of the NYC received enthusiastic coverage:

“The building of a railroad to the University marks a new step in the checkless progress of Notre Dame. The work which has lately been completed is a branch of the main line of the Michigan Central between South Bend, Indiana, and Niles, Michigan. It is nearly two miles in length, running in a winding direction north of St. Joseph’s Lake and terminating at the steam and electric light plant. The work also includes a switch that runs to the ice house.”

The new railroad extension onto the campus made the movement of both materials and people easier and cheaper than transferring them from railroads onto horse-drawn wagons or carriages from other points in South Bend.

The little ND&W also hosted excursion passenger trains full of fans arriving for football games for many years in the pre-interstate highway era. Up to six trains could be stored on the combined tracks that stretched at one time across the north side of campus. The steam locomotives and coaches would be serviced and readied for the return trip while fans were at the game.

The NYC — and corporate successors Penn Central and Conrail — delivered to the ND&W carloads of coal for the power plant, paper for Ave Maria Press, lumber, food supplies for the cafeterias and other campus needs.

Brother Borromeo Malley, CSC, who managed the ND&W among many other roles, said in 1991 that the rail line’s only remaining function then was to shuttle freight cars of coal delivered by Conrail between storage piles on the north side of Douglas Road and the power plant across the street.

An effort was made starting in 2006 to revive rail service to Notre Dame on the out-of-service Niles Branch that connected the campus to the Norfolk Southern mainline. Michigan City railroad enthusiast Bob Harris proposed a shortline railroad that would be called the South Bend Railway. It never came to pass, and in 2012 the tracks were taken out. The little blue and yellow ND&W locomotive was donated to the Hoosier Valley Railroad Museum in North Judson, Indiana, where it is undergoing restoration.

South Bend plans to create a bike trail along much of the old Niles Branch line right of way, from Lincolnway West to Riverside Drive in its first phase. The name would be the “Coal Line Trail,” a nod to its heritage serving Notre Dame.

Edward Hums ’75, an ND accounting professor, bid farewell to the railroad in a 2012 blog post: “So for now, I can only say good bye to our railroad: the ND&W, the Notre Dame and Western. That wonderful name and reporting mark that Brother Borromeo Malley, C.S.C., always took pride in. When asked why that name was given to our rail line, he would reply with a smile, ‘Sounds like a railroad.’”

Tom Burke, an account manager for Viavi Solutions, lives in Fox River Grove, Illinois, with his wife, Laura. He has written extensively on railroad history, an interest he inherited from his father, the late Jerome Burke ’58.