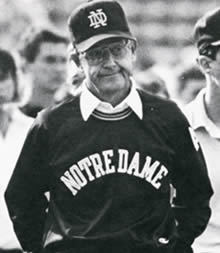 Lou Holtz is stuck in traffic.

“There’s an accident on I-95, and I’m just sitting here,” Holtz says through my cell phone.

Usually in perpetual motion, the legendary coach sits idling. If he could call an option play off the interstate he would, but instead he’s on a phone call with me.

Why am I talking to Lou?

Like every other Notre Dame fan, I’m trying to wake up the echoes. Trying to map a direct connection from the uncertain present to the glorious past.

We do it every five years or so, with each new coach. Compare the new guy to the legacy of Lou, Ara, Rockne and Leahy. You’ve probably heard this one before. “Ara, Devine and Lou all won national championships in their third year.” 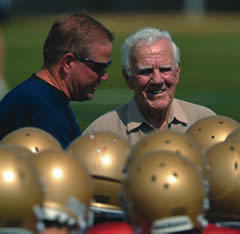 Here we are, 22 years after Notre Dame last won over all. Like most of you, I’m an Irish optimist with shamrock glasses. I forget the season last and revel in history past.

And when there’s a new start? A new coach? A new quarterback? Well, then it’s gotta be another national championship, right?

C’mon. You had that championship feeling after ND beat LSU to open the 1981 season, didn’t you? Faust Fever!

Lou chimes in from the highway. “The fans are always interested in two things. Who’s gonna be the new coach. And bring in the second string quarterback, he’s better than the first. I mean that is universal.”

Which reminds me of September 1986 — when Lou Holtz was new. The season opener.

Before Lou’s debut, Notre Dame had reached Faustian depths (30-26-1 over five years). The last time Notre Dame took the field in November 1985, they were pummeled by Miami 58-7.

A 24-23 thrilling, nailbiting, heartbreaking loss to #3 Michigan. The Irish ran up and down the field that day, outplaying Michigan in almost every phase.

“We played very well on offense that game,” recalls Holtz, taking a peek in his rearview mirror.

“The problem was we had five turnovers. I think we fumbled the ball a couple of times. Threw an interception, missed an easy field goal. At the end of the game had a touchdown that Joel Williams caught in the end zone they ruled was out of the end zone. There are a lot things you look at and say ‘We’re really the better football team in that particular game.’”

After John Carney’s game-winning field goal attempt fell short that sunny Saturday, the student body gave the losing team a standing ovation. Under Holtz, this was a new Notre Dame.

They did know how to almost win. Five of their six losses came by a total of 14 points. Three were to Top 10 teams by a total of eight points.

There is an overstocked warehouse full of hastily published books proclaiming the arrival of the next Notre Dame coaching legend.

Return To Kuharich. No Explanations. Lisps and Losses.

No, in 1986 it wasn’t a book, but it was Holtz who convinced his team that they could indeed, return to glory.

“I think it’s predominantly about getting the guys to believe,” Holtz says, then offers up a new Yogi-ism. “And the only way you get confidence is by two ways.

“One is by having success. And the other way you get confidence is by believing fundamentally that you know you can play the game. You know, the way you block and tackle and do those things. It comes back to fundamentals.”

Still stalled in traffic, creeping forward at the pace of Notre Dame football the past two decades, the master motivator lets me in on a secret.

How did he get his players to believe?

“I may come up and say, ‘Men this team is averaging 420 yards a game.’ But then after practice on Wednesday . . . from Wednesday to Saturday . . . there’s nothing but being positive.

“Wednesday you start getting them ready for the mental phase of the game. And that’s where you get confidence. I never lied to ’em. I never misdirected ’em, I never deceived them. What I did do was I always didn’t tell them the complete story early in the week.”

But just like that, Lou has to move on. Click. The glorious echoes, the wit and the wisdom, turn into a flat dial tone.

Traffic moves again on the interstate. Lou drives off into the sunset. And I move over to the Internet. Rejuvenated. Fired up for a new era of Notre Dame football.

I search for a football fortune cookie. A Kennedy-Lincoln comparison. Something that tells me Brian Kelly will be the new Lou.

Kelly was a head coach for 19 years before this autumn. Holtz won the national championship in his 19th season as a college head coach.

Yes! I’m pre-ordering my copy of The BK Way: How Brian Kelly Woke up the Echoes today.

Photo of Lou Holtz from the 1987 Dome. Photo of Brian Kelly and Ara Parseghian from ND Sports Information.