Long before it became hip to buy local, to choose organic, to go with natural ingredients and a diet of fresh fruits and vegetables, Notre Dame students were treated to home-grown, home-cooked meals three times a day — because they lived, in fact, down on the farm.

Provisions were scarce when Father Edward Sorin, CSC, and his band of brothers arrived at the mission cabin in November 1842, staring winter in the face and scheming to coax a boys’ boarding school out of the woodsy wilderness. But by 1844 Brother Lawrence Menage, who had been raised on a farm in France, had 120 acres under cultivation (wheat, potatoes and corn), and the school’s first building (today’s Old College) had a kitchen and dining table — along with most everything else that constituted the school. 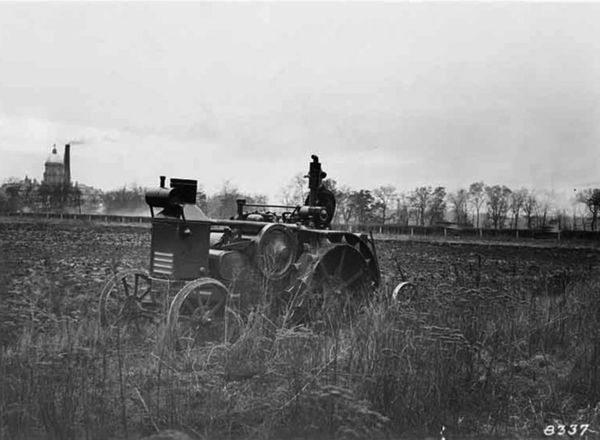 The first separate kitchen building was completed in 1849, and for decades all the school’s meals were prepared by Holy Cross sisters with assistance from the brothers who baked and butchered. Meals were pushed on carts to the Main Building, where students ate in the refectory there.

The students, according to one historian, “stood until Father Sorin entered. They all said grace together, at first, in Latin, later on, in English. The food was simple to the point of poverty. There was always soup. In one instance, Mr. Gouesse, later Father Gouesse, complained that the students wouldn’t eat the soup. It was ordered that the cook make better soup, and not water it down in order to procure greater quantity. Poverty sometimes rendered the food unsatisfactory.”

By 1895, however, there were more than 20 farm buildings — a round barn; dairy barns and cattle barns; sheds for horses and sties for more than 700 Hampshire hogs; an icehouse, sugarhouse and slaughterhouse; windmills and corncribs; henneries; granaries; and housing for the field hands. There were pastures for livestock, orchards for fruit trees and more than 1,000 acres of crops ringing campus — corn, rye, wheat, oats, clover and alfalfa. The lakes provided not only fresh fish but also ice — harvested as late as 1916 for use in the days before refrigeration.

The farm was as big an enterprise as the school itself, even though Notre Dame was then an elementary school, high school, manual labor school and “university.”

Still, in Notre Dame, 100 Years, Rev. Arthur Hope, CSC, wrote: “When the good Sisters used to do all the cooking for the students, there was the tendency among the boys to indulge in criticism of this sort: ‘The University makes as much as she can off the meals. That’s why our food is so poor!’” But Hope also noted, “To complain about the food is a privilege of college boys. No one takes it very seriously, particularly when they keep adding unbelievable pounds to their skinny frames.”

Brother Leo Donovan became director of the University farm in 1900 and — to revive the land’s depleted fertility — took courses at the universities of Iowa and Illinois to learn new agricultural techniques to go along with his own experimentations. His efforts brought results. One 30-acre plot (where the Law School now stands), which yielded 300 bushels of potatoes before Donovan applied his fragrant natural fertilizers, produced 8,200 bushels afterward. And a nearby 200-acre wheat field fetched a state record 6,000 bushels.

Before Donovan retired in 1940 the farm grew to 3,500 acres, provided food for thousands of students, produced peat for campus fireplaces, supplied tobacco for faculty cigars and bred champion livestock — swine herds, Belgian stock horses and prime beef cattle — that won shows and state fairs around the Midwest. The farm was soon second only to football as an auxiliary enterprise generating revenues for the school.

In 1917 Notre Dame became the first Catholic university to establish an agricultural school, offering degree programs in seven agricultural areas. But the envisioned enrollment of 300 never matriculated, and the “Aggie” impulse had run its course by 1932.

In 1920 University bakers produced more than 300 loaves of bread, more than 3,000 cookies and more than 3,000 “Notre Dame buns” — daily. The Notre Dame bun, served at every meal (including steak-and-gravy breakfasts), acquired celebrity status with generations of students. The revered English professor Richard Sullivan described them in 1951 as “inexpressibly excellent when fresh and piled with unsalted butter; but hardening gradually as they aged down the week; until they petrified finally into legend, and became formidable to dental fillings, and were universally cursed and celebrated, and addressed in ink, plastered with a stamp, and mailed — bare parcel post — to friends, parents, sweethearts, all over the country.”

To expand the fare, Brother Leopold Kaul — from the Civil War until World War I — ran a little snack store that catered to a student’s sweet tooth, offering candy, pretzels, confections and more than 20 varieties of little cakes. And in the 1920s (in addition to the refectories in the Main Building) the University ran a cafeteria in Badin Hall “where students could take their meals and procure, at least theoretically, what they wished,” wrote historian Hope.

The South Dining Hall, intentionally resembling a medieval guild hall (oak-beamed, with terrazzo floors, orchestra balconies, lancet windows and limestone fireplaces) opened for business in 1927 as the farm moved east and away from campus. The brothers tended those 1,500 acres well into the 1990s and sold the land in 2008 — just as student appetites rediscovered the appeal of homegrown food.