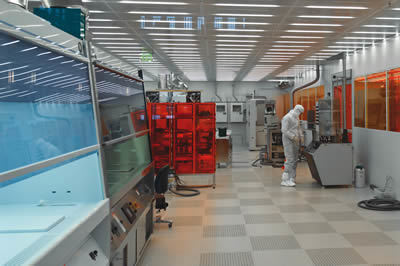 Rising four stories above Notre Dame Avenue, Stinson-Remick Hall may well be unique among Collegiate Gothic buildings for housing a high-end cleanroom for nanoelectronics research. This union of institutional tradition and scholarly vision, say the new building’s gladdened inhabitants from the College of Engineering, is but one way it captures what is best about Notre Dame, past and future.

Professor Patrick Fay ’91 is one of these happy occupants. His research on next-generation semiconductors and high-performance electronic devices is an example of the pioneering work ND engineers and scientists may now perform with greater confidence and productivity because of the cleanroom’s dust-free environment and the research-minded designs of the building’s other labs and workspaces.

“The former dean of engineering, Frank Incropera, used to say that we were doing first-rate science in third-rate facilities,” Fay says while narrating his lab’s move-in-progress from Fitzpatrick Hall to Stinson-Remick, which opened in January. “This basically gets rid of the third-rate part. We were doing a lot of stuff to work around the limitations of the facility. That will not be the case anymore.”

Several Stinson-Remick labs will operate synergistically with the cleanroom as key components of NDNano, the University’s Center for Nano Science and Technology. Together they’ll support the multidisciplinary labors of electrical and chemical engineers, computer scientists, chemists, physicists and others on materials and processes one million times smaller than the head of a pin. 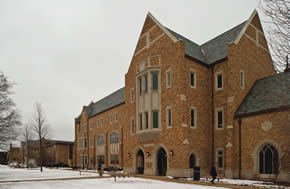 Empowered by the new facilities, NDNano researchers will accelerate their leadership of a young, industry-funded consortium of university, government and industry partners called the Midwest Institute of Nanoelectronics Discovery. MIND’s quest, in conjunction with three similar regional research hubs elsewhere in the United States, is to map out and move toward the smaller and faster future of the computer chip. Many expect this research to seed substantial, long-term economic growth in South Bend.

Along with NDNano, the new hall will house two additional recipients of multimillion dollar strategic research investments that the University announced in 2008. One is Professor Paul Bohn’s Advanced Diagnostics & Therapeutics initiative. Another is the Integrated Imaging Facility, a unique collection of powerful microscopes that will allow dozens of ND scientists and engineers — and visiting scholars — to better see the objects of their study.

The building itself will teach students about energy efficiency. General Electric has donated a 200-panel solar array, and natural gas provider NiSource installed a microturbine. These sources will meet a small fraction of the building’s energy demand and will trim costs, but their primary value is the downloadable data they will provide to students learning firsthand about energy efficiency. Stinson-Remick’s low-flow toilets and reuse of exhaust heat to warm incoming air are two among dozens of features that architects hope will earn the building LEED certification — a designation of environmental sustainability — later this year.

For the average visitor, though, the cleanroom is Stinson-Remick’s showpiece.

The nanofabrication facility that Fay directed in Fitzpatrick wasn’t “clean,” which for engineers means devoid of the microscopic aerial debris that can spoil research on all things tiny — like the delicate transistor circuits of which high-speed electronics consist.

“In a circuit, every transistor has to work,” Fay explains. “If a piece of dust lands on one of them, the whole circuit’s finished.”

Here, clean can be quantified. The cubic foot of air from which you’re now drawing breath likely contains millions of tiny particles mostly innocuous to everyday life, and even to much valuable scientific research. Stinson-Remick’s three cleanroom bays shave that down into mere thousands per cubic foot — or even fewer than 100 in the amber-lighted space where researchers will use leading edge photolithography instruments to fabricate and manipulate semiconductor chips finer and faster than they could before.

Fay, of course, won’t be the only one to make use of the cleanroom. He recently tallied 139 professors, postdocs and graduate students whose research needs in fields directly tied to NDNano — high performance electronic devices, optical electronic processes, microelectromechanical systems and nanomagnetics — as well as in microfluidics, will benefit.

That number doesn’t account for undergraduate research apprentices or the grant-funded, visiting summer students seeking research experience. Nor for the hundreds of undergrads in the college’s five departments who may observe the cleanroom at any time through the glass walls that separate it from Stinson-Remick’s sun-flooded student commons.

The close proximity of pathbreaking research to the McCourtney Learning Center, located on the building’s first and second floors, may be what most excites Peter Kilpatrick, the McCloskey dean of the College of Engineering.

Kilpatrick cites Notre Dame’s traditional difficulty with spurring students toward graduate study while explaining the rationale behind the building’s dual research-teaching purpose. He wants graduate school to become an attractive path on day one.

“If every day when they come over for their freshman learning lab experience they see researchers behind the glass in the cleanroom working away, I think they’re naturally going to get curious,” he reasons. “What’s going on in there? Why are they dressed up in bunny suits? What’s that all about?”

Students had an active hand in designing the building’s common spaces, the Kitz Kafé coffee shop and the learning center, which facilitates students’ work on hands-on project assignments. The labs, project rooms, study nooks and computer clusters that comprise the center quadruple the space formerly set aside for them in Cushing Hall.

The learning center’s old digs were like a one-room schoolhouse for undergraduate engineers. The management knots that created for Natalie Gedde, the center’s manager, were constant. During the day, she says, the numerically dominant freshmen habitually floated into the senior electrical engineers’ workspace. Aerospace engineers worried about their airplane models. Everyone vied for computer time and storage.

Now undergrads will have bioengineering and chemical engineering labs in separate rooms down the hall and around the corner from the workshop where their peers in civil and mechanical engineering are sawing into wood and PVC. One perk of the extra elbow room, Gedde expects, is that more professors from across the college will think about incorporating the center’s resources into their courses, rather than writing them off as the domain of the undeclared First Year.

Kilpatrick hopes Stinson-Remick’s Holy Cross Chapel will more clearly align the college with Notre Dame’s Catholic mission and forge bonds among students, who traditionally identify with each other by department. To his knowledge, it’s the only chapel inside an engineering building in the country, and the only chapel on campus dedicated to the religious community that built Notre Dame. Its four stained glass windows depict, left to right from the pews, Saint Joseph, Our Lady of Sorrows, Father Basil Moreau, CSC, and Brother Andre Bessette, CSC, on backgrounds illustrating the four seasons.

Stinson-Remick Hall was named for lead benefactors Kenneth Stinson ’64 and John Remick ’59. Together with a third engineering alumnus, Ted McCourtney ’60, their contributions covered well over half of the building’s $70 million design and construction costs. BSA LifeStructures of Indianapolis was the architect and engineer of record. RFD of San Diego and Abbie Gregg Inc. led various aspects of cleanroom and lab design.

Now that the new building is up, Kilpatrick says the next step is to rehabilitate Cushing and Fitzpatrick Halls and reassign vacated spaces to meet his college’s dynamic needs.