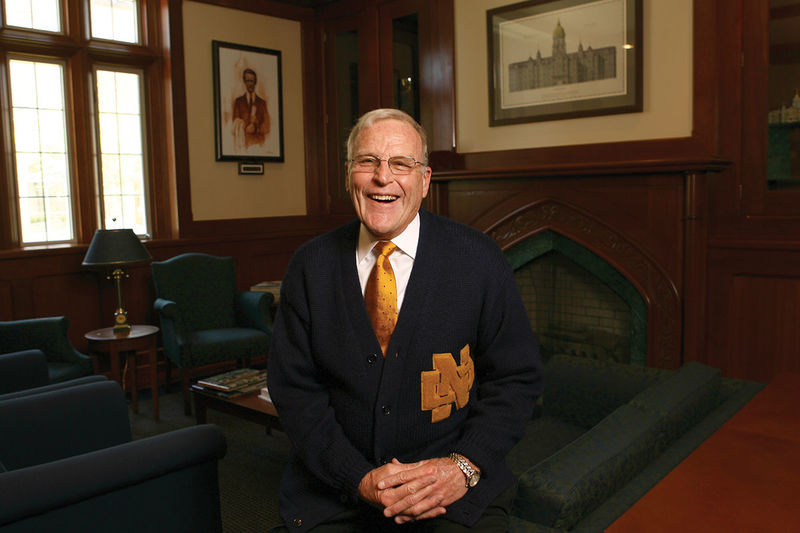 The world was a better place with Chuck Lennon in it. He lifted spirits. He made you smile, then marvel at his irrepressible joy. His enthusiasm could sweep a rainbow of color across a drab, black-and-white landscape. He was relentlessly upbeat, perpetually in motion. He was super gung-ho about everything he did, and he did a lot in his 80 years of barreling headfirst through life.

Chuck Lennon ’61, ’62M.A. died May 4. Most knew him as executive director of the Notre Dame Alumni Association, a post he held for 30 years before retiring in 2011 and receiving an honorary degree as a thank you.

Under his leadership, the association advanced ambitiously beyond its networking agenda, adding an impressive array of continuing education programs, establishing a multitude of community service projects and creating alumni groups for black, Hispanic, Asian Pacific and Native American graduates as well as expanded roles for women, senior, young and international alumni. Under Lennon’s direction, the number of geographic clubs grew from 151 to 276 — including the addition of 62 international clubs.

But Lennon was much more than a responsive administrator; he was the University’s ambassador, the tirelessly good-natured liaison between the institution and its 130,000 alumni. He launched a wide sampling of marketing and merchandising efforts, because he had to be entrepreneurial to underwrite all the association’s new initiatives. And Lennon said “yes” to most everything — with a sleeves-rolled-up, get-it-done attitude.

If you caught Lennon’s voicemail, you’d have to listen to a South Bend weather report, hear the latest scores from Irish sporting events and accept his good wishes for a great day before leaving a message. If you were lucky enough to be at a Christmas party near campus, you’d be treated to the best Santa Claus ever. And if you attended a pep rally when Chuck Lennon was leading the hoopla and hysteria, you could only grin and enjoy the show. He once stunned the entire dining room at a fancy South Bend restaurant when he demonstrated the rollicking old “Notre Dame Man” cheer, complete with gymnastics and a climactic tumble and kneel — arms stretched over his head in a final pose. There was no guile, no pretense, nothing artificial about Chuck Lennon. His boyish delight never waned.

There was substance and strength there, too. In his career Lennon served as executive director of South Bend’s Redevelopment Department and led the Mental Health Association of St. Joseph County, the South Bend Model Cities program, the Community Development Agency and the Housing Allowance Office. He volunteered with the Boy Scouts and served on the South Bend school board for 12 years. He and his wife, Joan, embraced numerous community organizations, including those supporting health care, the arts and social service. During Lennon’s funeral Mass at the Basilica of the Sacred Heart, former University president Rev. Edward “Monk” Malloy, CSC, ’63, ’67M.A., ’69M.A., called Lennon “an icon of Christian service.”

At the same Mass, Lennon’s son Kevin told the overflow gathering that his father’s signature enthusiasm “was both authentic and contagious” and came from a deep and abiding faith. His parents said the rosary together daily.

The younger Lennon said he once asked his father how he could bring such enthusiasm and energy to so many on a daily basis. His dad offered advice he had once received from Rev. Ted Hesburgh, CSC, who had said the key to a joyful life was to be present in every situation, be attentive to the needs of others and to let the Holy Spirit work through you. “Then he told me, ‘Don’t wait for the energy to come. But take the first step toward the right thing, the just act, and the Holy Spirit will provide the energy you need,’” Kevin Lennon said.

Chuck Lennon’s game was baseball. He lettered as a varsity catcher, then coached baseball and basketball briefly at his alma mater. His jersey hangs at Legends, the Irish sports-themed eatery on campus. Over the years he caught hundreds of games in local leagues, organized alumni games and traveled with the Irish under several coaches. In 2011, he was inducted into the Irish American Baseball Hall of Fame at Foley’s NY Pub & Restaurant in New York City; Regis Philbin ’53 delivered the induction speech. Throughout his 70s, having moved to Florida, Lennon was an assistant baseball coach at Ave Maria University, making such an impact there that players made a farewell visit to Lennon at his hospice facility and a group from Ave Maria came to South Bend for his funeral.

Lennon, whose grandfather and his eight brothers are remembered at the National Baseball Hall of Fame in Cooperstown, New York, for winning the “Family World Series” in 1903, was playing ball for Joliet Catholic High School when he spotted a cute girl from St. Francis Academy in the stands. He and Joan would be married 58 years, loving partners with five children and 16 grandchildren.

During his eulogy, Kevin Lennon spoke for many when he said, “I know that every one of you here today can recall many times when Chuck Lennon was there for you. And often after one of these experiences you’d say to yourself, ‘Who is this man? How is he so positive? And thank God for Chuck Lennon.’”