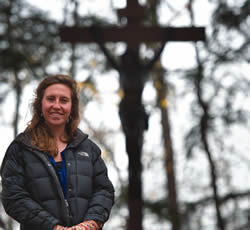 September 26, 1987: Two graduates of Notre Dame Law School married at the Basilica as the Fighting Irish played at Purdue. As the wedding party gathered to take pictures, someone realized the bride’s father was missing. Eventually they found him in his hotel room, unable to tear himself away from the game on TV.

My grandfather became a lifelong Notre Dame fan when his daughter, my mother, attended Notre Dame as an undergraduate. Charlie and Marge Kiley drove out from Livonia, Michigan, for every game when my mother was an undergraduate, and remained ardent fans as my mom graduated from Notre Dame Law School, married a fellow J.D. and had three children, two of whom are now enrolled at Notre Dame.

Over the course of the three years I’ve spent here so far, my grandpa has asked me countless times about my Notre Dame experience. A recurring joke of his was that Notre Dame had hired him as one of the coaches of the football team.

As I entered my senior year, his most persistent question became, “Have you finished all your requirements yet?” Each time he asked, I explained that no, if I had finished all my requirements I would have graduated already. And I’m certainly not in a hurry to leave this place.

On the morning of October 25, I was scrambling to finish an assignment due for my 11 a.m. class. My dad called at 10:11 a.m., and I answered his call reluctantly, ready to tell him that I would call back later because I didn’t have time to talk.

This wasn’t a call that could wait until later.

My grandfather had passed away the previous night, finally succumbing to the heart condition that had plagued him the last few years.

For most of my life, my grandpa was the only member of my extended family who lived near us in San Diego. He spent every holiday and birthday with my family, attended every game and piano recital. His health may have been declining as he aged, but his mind and sense of humor were as sharp as ever, and his death was unexpected.

After my dad’s call, I moved in a grief-fueled daze from the Grotto with my brother Connor, a sophomore at Notre Dame, to the lakes with my roommate. After my roommate left to go to class, I decided to try to find a somewhat-secluded statue I’d heard about recently, one that’s nicknamed “Jesus in the Woods.”

I walked along Moreau Drive past Columba Hall and then ventured right into the woods, crunching on leaves and stepping over branches, hoping I would stumble upon the statue.

Eventually I found it. Fall colors framed the quiet elegance of the crucifix and the statues of the Virgin Mary and Mary Magdalene that stood on either side. I realized, when I arrived at the statue, that Notre Dame had cleared a path straight to it. I had just been too preoccupied to notice.

That night, Connor and I ate Rocco’s pizza at my apartment with a few of my friends. Others stopped by to express their condolences, bearing the college version of sympathy flowers: a cupcake and Starbucks.

An admissions counselor that I’ve worked for since my freshman year as a student employee drove me and my brother to the South Bend airport two days later so we could fly back to San Diego for the funeral.

Twice that weekend, both on my flight to San Diego on Thursday and my return flight to campus that Sunday, I felt like I was going home.

Back in 1987, Notre Dame beat Purdue 44-20 as my grandpa watched from his hotel room. On October 29, my family and I watched the Navy game together after my grandpa’s funeral. The Fighting Irish emerged with an even stronger victory that day, 56-14, and it felt like another small addition to everything Notre Dame has already given us.