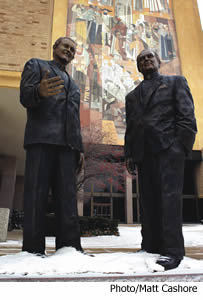 Even promoted to 7 feet tall, Father Hesburgh appears appropriately shorter than his friend and partner in running the University for 35 years, Father Edmund P. “Ned” Joyce.

The famous duo, separated by Joyce’s death in May 2004 at age 87, are reunited in bronze in a new sculpture installed on the south side of the Hesburgh Library.

Artist Lou Cella of Chicago’s Fine Art Studio of Rotblatt Amrany created the work, which was presented to Notre Dame on behalf of the 50th reunion of the Class of 1953. That was the first class to graduate under the leadership of Hesburgh and Joyce.

The piece is located between the library and the reflecting pool. Hesburgh, 5-foot-11 in real life, and Joyce, who was 6-1 but measures 7-foot-4 in Cella’s bronze, stand on a granite base inscribed with a quote from each.

Hesburgh’s reads: “A Catholic university should be a beacon, bringing to light, in modern focus, the wonderfully traditional and ancient adage, ‘faith seeking understanding,’ it should be a bridge across all chasms that separate modern people from each other, and it should be a crossroads where all the intellectual and moral currents of our time meet and are truthfully considered.”

Joyce’s reads: “Notre Dame is first and foremost a university and only insofar as it excels as a university can it give proper homage to the patroness who bears as one of her noble titles, Seat of Wisdom.”