As I sat in my window seat aboard a turbo-prop plane operated by Red Carpet Airlines — really, that was the name; you can’t make this stuff up — I saw a steady drip, drip, drip of oil falling from the right engine onto the tarmac. This was the spring of 1979 and I was part of a U.S. athletics delegation headed to Havana.

To say the leaky engine was a bit unnerving is an understatement, but the plane made it off the airport runway in Key West and we successfully navigated to Cuba. It was a short trip in miles, but way back in time — even then. 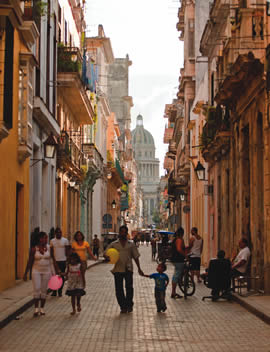 The Cuba of 1979 was not much different from the Cuba of 1959, when Fidel Castro consummated his takeover. And, from what I’ve read in the intervening years, the Cuba that President Obama is visiting this week isn’t much different from those pre-revolutionary days or what I saw — though I feel certain the Air Force One mechanics made sure the president’s plane was leak-free.

My memories of Cuba remain vivid, even all these years later, and they also remain positive despite the despair and decay that is so prevalent throughout the country.

Just like the other islands of the Caribbean, Cuba is gorgeous. The sand is white and fine, the water is a crystal-clear blue-green, and the sunshine is abundant. Our group stayed in cabanas on a beautiful beach outside of Havana that compares favorably to any on Jamaica, Bermuda or the Caymans. While the accommodations weren’t luxurious, the natural surroundings were superb. So were the rum and cigars.

I had ample opportunity to explore Havana itself and came away with a mixture of pleasure and pain.

One cannot visit Cuba without walking away in utter awe at the skills of car mechanics. Many — if not most — of the vehicles on the roads were built in the 1950s or before, and yet they keep right on running. Cubans use any and all auto body parts to patch and mend their cars. The result is a wildly colorful streetscape where one might see a white ’57 Chevy with red Buick fenders and a green Ford trunk. It’s quite a sight.

The Malecón is a promenade and road fronted by a wall that stretches for five miles along the coast near Old Havana. It is a beautiful area of the city that, I understand, is now experiencing some renovation. At the time, the wall was crumbling, but the street was lively and the view was spectacular.

Old Havana is the center of the city, crisscrossed by narrow streets lined with homes, churches, shops and other buildings. It is a smorgasbord of colors and scents, but, again, at the time I was there the structures were in need of massive repair. It was painful to observe, and yet the people carried on.

The people, yes, the people.

The Cubans I met could not have been nicer. They were thrilled to meet Yankees and usually willing to talk about their lives, but they never would reveal their names. Two men I spent an afternoon with were in their mid-20s, living at home and working odd jobs. They were open about the plight of their nation and the failure of Fidel, proud of their culture and hopeful for what Cuba could be. But that hope rested on the United States ending its embargo.

Two of the great passions at the time of my visit — and no doubt still today — were sports and music.

I watched a baseball game at Estadio Latinoamericano. The level of play was excellent, something we Americans would see for ourselves a decade or so later when members of the Cuban national team began to defect and play in the U.S. minor and major leagues.

In addition to baseball, boxing, track and field and volleyball were Cuba’s favorite sports in 1979. The heavyweight boxer Teófilo Stevenson, then a two-time Olympic gold medalist who would win a third gold the following year, was a national hero. He believed fiercely in the amateur ideal and turned down multi-million-dollar offers to come to the U.S. to fight Muhammad Ali.

While not quite at Stevenson’s level, the track star Alberto Juantorena was widely revered for his double-gold-medal performance in the 1976 Olympics in the 400- and 800-meter runs. Known as “The Cuban Horse,” he went on to serve in a variety of capacities on Cuban track and Olympic committees.

I was in Cuba to report for my newspaper on the Olympic qualifying effort of the U.S. women’s volleyball team. By finishing second in the NORCECA Tournament, the Americans did, indeed, qualify (though that went for naught a year later when the U.S. boycotted the Moscow Olympics), but they were defeated in the championship match by the Cubans, who were the defending world champions. The match was attended by about 10,000 fans — including Fidel.

As for music, Cubans were able to pick up Miami radio stations at night and the people I spoke to were mesmerized by the Bay Hays (Bee Gees) and Billy Yoel (Joel). Today, I suppose they are equally enamored with Yustin Bieber and Taylor Sweeeft. 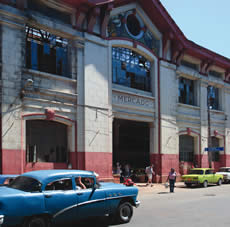 Sadly, at least back then, the nightclubs that were so much a part of the Cuban scene in the 1950s were largely dark. And, like so much else in Havana, the American-built hotels that were bustling with tourists before the revolution were more than worn around the edges.

I guess I shouldn’t have been surprised that it was harder to get out of Cuba than to get in. Our Red Carpet Airlines flight was delayed several hours as customs officials took their time clearing our party. At one point, the head of our delegation suggested the men in the party surround the U.S. players and march as a group out of the building and across the tarmac to the plane. As I looked around at the machine-gun-wielding soldiers inside and outside the terminal, I thought, “Ummmm . . . does anyone have a better idea?”

Treasury’s announcement was the latest in a series of administration initiatives to restore relations with the island nation. In recognition of the young men I spoke to that afternoon many years ago, it’s about time. I’m happy for the Cuban people, and equally happy for my fellow Americans who may now visit a culturally rich and beautiful country that for far too long has been a mystery to its northern neighbor.

Dennis Brown is the assistant vice president for news and media relations at Notre Dame.