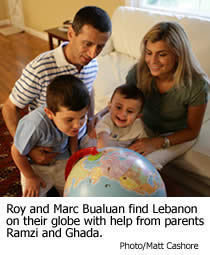 Nearly a million people fled the destruction caused this summer by the fighting between Israel and Hezbollah militants in Lebanon; most were Lebanese civilians who returned to find their homes and lives destroyed. Among the estimated 60,000 who left the country altogether were several people with close ties to the Notre Dame community.

Classics professor Li Guo emailed the South Bend Tribune from his Beirut hotel room July 18, five days after the bombing started. He was teaching in the summer Arabic program at the American University of Beirut (AUB); earlier in the year he had been visiting friends in the Israeli city of Haifa. The air raids forced the university to close and Guo to find a way home.

On July 22, Guo joined the last group of AUB faculty and staff who were airlifted by U.S. Marines to the USS Whidbey Island, one of many ships transporting evacuees to Cyprus. Safe at home in South Bend, Guo praised the Marines but lamented what he called a “pointless” war that had taken the lives of more than 1,000 civilians.

At the same time Guo was emailing home, Ramzi Bualuan ’85M.S. was in touch with his wife, Ghada, who was visiting relatives with their sons as the family does most summers. Ramzi Bualuan, who teaches and directs undergraduate studies for the Department of Computer Science and Engineering, had planned to join Ghada in August. As the violence grew more widespread and destructive, the Bualuans considered their options.

The journey to Cyprus looked harrowing, and the Bualuans knew no one in Larnaca, the coastal city in Cyprus that is home to the country’s largest airport. So they chose to send Ghada and sons Roy, 4, and Marc, 2, by taxis first to Damascus, Syria, and then Amman, Jordan, where they had friends, some of whom are Notre Dame alumni. Maher Mouasher ’87 met them in Amman.

The journey lasted seven hours, but it was no leisurely drive. Before the family crossed the Syrian border, a bomb landed near their car.

“To me, the minute they left Lebanon I felt they were safe,” Ramzi said. “At each step they were in the hands of people I trusted.”

Domers in the region also reached out to a Notre Dame junior, who relied on his knowledge of Arabic and his travel skills to get himself home. Joe Janke, one of Guo’s students in the Middle East Studies program, had spent the spring in Cairo through Notre Dame’s international study program. After finishing the semester and attending a separate seminar in Palestine on Arab and Israeli politics, Janke continued his studies in an intensive Arabic language and culture program at the Lebanese American University in Beirut.

“The majority of the people in the program wanted to stay,” Janke said. “We were all pretty happy with Lebanon. We wanted to . . . see if it was going to blow over.” But Janke’s family was eager to see him home.

Janke could have chosen the Marines’ straightforward evacuation but opted to leave the country through Syria. One car took him to the border, a second through Syria and Jordan to Amman. Meanwhile, Notre Dame administrators and alumni were trying to get in touch with Janke, offering him safe places to stay in northern Lebanon and elsewhere.

By that time, Janke was already in Aqaba, a Jordanian port near the Red Sea. A ferry and a bus ride took him to Cairo, where he had planned anyway to finish the summer and gather his belongings before returning home.

“I never felt my safety was threatened,” he said, but added that he doesn’t regret the decision to leave. His biggest concern is how the conflict will further deepen misperceptions of the Middle East and its people.

“There’s a lot of irrational fear,” Janke said. “They’re really good people, friendly, open.” He noted several instances when he asked locals for directions and they would instead lead him where he needed to go.

Helping people became the story for Khalil Matta ’80M.S., ’82Ph.D., a management professor in the Mendoza College of Business. Like the Bualuans, Matta returns to Lebanon every summer. He visits family in a village in northern Lebanon and works with summer programs at the University of Balamand, where he serves on the board of trustees.

Matta’s small town overflowed with refugees from Beirut and the south, where most of the destruction occurred. Rather than leave the country, Matta decided to stay and support relief efforts. Lebanon’s devastated infrastructure cut off commerce between regions, sending prices of goods such as gasoline and potatoes impossibly high and leaving hundreds of thousands of people struggling to meet basic needs.

“You become aware of what are the necessities of life,” Matta said. Putting 500 people in a school meant finding not only food, but mattresses and blankets, diapers and powdered milk for children, toilet paper and towels for the bathrooms.

“What struck me was how sad the situation is, how needless this whole thing was, how much destruction there is, how much pain and suffering was caused to innocent people,” he said.

Matta remains optimistic about the success of relief efforts and the possibility of a lasting political solution to the hostility between Hezbollah and Israel. The fact that the refugees returned, he said, “tells me that the people who were fighting . . . do not intend to start something again.”