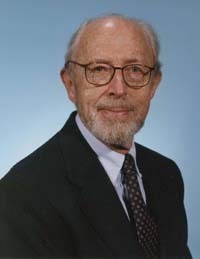 My husband came home from a Faith and Reason conference the other day and showed me one of the materials included in his conference packet. It was an obituary for Fred Crosson, my college professor, who died December 9, 2009.

In the first few years after graduation I had emailed Professor Crosson intermittently — mainly reference questions and requests for letters of recommendation. But I had been out of touch with him for some time when I learned he was in a nursing home in South Bend. I began sending him Christmas letters, holiday notes and photographs of my children.

Fred Crosson was a great mind. He was the dean of Arts and Letters when my father attended Notre Dame and the national head of Phi Beta Kappa when I graduated. Friends at other universities were reading journal articles by Crosson in their philosophy classes. And I got to have him for two courses in the Program of Liberal Studies.

It was evident to all of us students — even before we realized that Crosson was somebody famous — that we were dealing with a great mind. One of my classmates described how, when he brought a philosophical problem to him, Crosson would nod with a faraway look in his eyes, as though remembering the time in his life when he had wrestled with that problem.

But his most memorable characteristic, at least for those of us who knew him near the end of his long teaching career, was his frequent, raspy chuckle. One friend joked that with his penchant for black turtlenecks, his clipped white beard and that scratchy, cackling laugh, Fred Crosson reminded him of a scary pirate. Well, Aristotle cited “risibility” — the ability to laugh — as the obvious evidence that human beings are rational. So it wouldn’t be surprising if Crosson’s great mind carried with it an extra dose of “risibility.”

Once I started writing to him in his nursing home, I began to wonder what sorts of things he would like to receive. What do you send a great mind when the body that it inhabits fails? A copy of a recent philosophical journal? Something lighter? Could he still read? Did he want to hear about my doctoral research? Funny things the kids do? Would he like a package of homemade baked goods? I called the nursing home and they said he liked looking at pictures in books. They also said Crosson attended read-alouds offered by the nursing home.

By some generous twist of providence, I was able to visit Crosson a month before he died. Though I hadn’t been back to South Bend in the 12 years since graduation, my husband and I were speaking at the fall conference of the Center for Ethics and Culture. We bundled our 8-month-old into the rental car and drove up Ironwood Road to the nursing home to see for ourselves how he was doing.

Well, he gave a raspy chuckle when we pushed our stroller up to his wheelchair. He was unable to speak, but my husband guessed that he wanted to see the baby. I told him about our other children back at home. I had brought him a hard-cover copy of Saint Augustine’s Confessions, remembering that it held the great distinction of being the one book (along with Dostoevsky’s Brothers Karamozov) that he had re-read almost every year. He chuckled again when I put it into his hands — was he tickled that I remembered his favorite book, or was it the laugh of recognizing an old friend? Was he thinking about the time in his life when he grappled with Augustine’s questions? Or was he chuckling because he had now left Confessions behind in his own approach to eternity?

As Dr. Crosson struggled to turn the pages, I told the nurses standing around that it was one of his favorite books and that he might enjoy having it read to him.

“Is it going to be something we can read?” one of them asked skeptically. I nodded, relieved that I had passed up the Latin version, for all its gorgeousness.

“Was he a hard professor?” the nurse asked.

“Not hard, just good,” I answered. I didn’t want him to sound like a pushover, but I couldn’t remember an encounter with Crosson or a class I’d taken from him that had been painful. On the contrary, my last and worst college paper came back to me. It was the final paper for Crosson’s political philosophy class, and I had begged an extension because finals week of senior year was spiraling out of hand. He generously assured me that I could take all the time I needed. I turned in the paper, on civil disobedience, in the middle of senior week, hoping he wouldn’t notice that it had absolutely no thesis.

When Crosson saw me at the graduation brunch, he told me where I could pick up the graded essay. “Nice paper,” he said, smiling. I retrieved the paper, marked with a B- and a mild comment to the effect that the grade would have been higher if there had been more of a thesis.

My father had benefited from Crosson’s generosity and laid-back approach 20 years earlier. A theater major, my father had been called into Dean Crosson’s office a month before graduation because his transcript was missing the P. E. credits necessary to graduate. That’s right: Physical Education. My father, despite having grown up on the Jersey Shore, had failed the freshman swim test. He thought it was ridiculous for someone who had been swimming all his life to be forced to take a swim class, so he never went. Crosson had to inform him that he might not graduate.

“But I’ve been admitted to graduate school! My wife is expecting a baby. I have to graduate.” I don’t know if Crosson chuckled a raspy laugh or looked back to a time in his life when a similar problem had faced him. But he peered at my father’s transcript and found a theater class called Voice and Movement. “We can count that as your P.E. credit,” he assured my dad.

The most egregious memory I have involving Crosson, though, happened during his politics class. As I sat listening to his lecture on Aristotle’s Politics, something he said put me in mind of my time at Girls State, a high school patriotism camp sponsored by the American Legion Auxiliary — originally as a response to Hitler Youth. The epic incongruity between my august professor, lecturing at the blackboard, and 500 Oklahoman cheerleaders screaming in support of their fictional political parties suddenly struck me. And yet both were ordered to the same end — teaching me about politics. The absurdity of the comparison was too much for me: I burst out into uncontrollable giggles. The more I thought about the total inappropriateness of such behavior in the middle of a lecture on Aristotle, the harder I laughed. Finally I fled the room.

I called the professor later in the day to apologize. I explained what had happened, wishing I could think of a more plausible story. He was characteristically laid-back about the matter, though I could tell he had been puzzled by sudden, inexplicable guffawing from a consistently serious student.

Not hard, just good. I still remember the discoveries I made in his seminar. The fact that he never pushed made the discoveries seem to be really mine. He had taught these texts for so many years by the time I came along that he must have been able to look back and remember how many students had grappled with the same issues. He had been teaching the Great Books for so long that perhaps he had internalized Socrates’ image of the teacher as midwife, or Saint Thomas Aquinas’ claim that the teacher’s role is strictly to remove obstacles to the student’s work of discovery.

“Well, he must have been good if you came back to visit him,” the nurse commented. Professor Crosson gave a throaty laugh. I don’t know what he was thinking about in those, the last days of his life, but I was especially glad that he was able to laugh.

Beth Mortensen is a doctoral candidate and mother of four. She lives in Lander, Wyoming, where her husband teaches at Wyoming Catholic College.