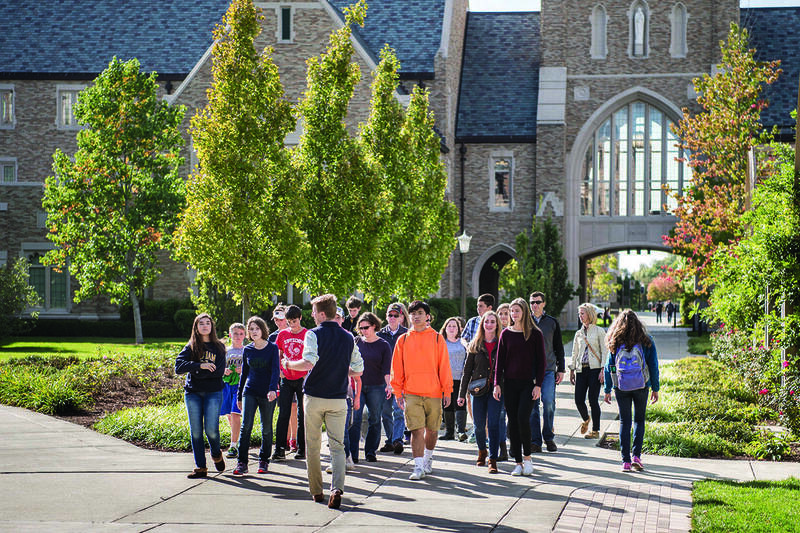 Campus tours, commonplace before the pandemic, resumed in limited fashion in June. Photography by Matt Cashore ’94

Time-honored rituals of the college admissions process — counselors traveling to high schools and college fairs, in-person information sessions, hopeful applicants soaking up the beauty of campus during walking tours and weekend visits — came to an abrupt halt in early 2020 amid the coronavirus pandemic that prohibited travel and barred visitors from campus.

The circumstances required a deft switch to new approaches, but the process itself moved forward on schedule, and the University fulfilled the most important tradition of all: In August, a new class of freshmen will arrive at Notre Dame to begin their undergraduate careers.

The Class of 2025 will be the most diverse in the University’s history — racially and ethnically, globally and socioeconomically — says Don Bishop ’77, ’85M.A., associate vice president for undergraduate enrollment. Bishop describes the incoming class as “exceptionally accomplished academically but also balanced by a genuine and impressive record of leadership and service to others.”

Admissions is one of the most demanding jobs on campus, even in the best of circumstances. The responsibility requires weighing the academic records and aspirations of some of the top young minds in the United States and around the world, many of whom have dreamed of attending Notre Dame their whole lives.

The shaping of the incoming freshman class began with an all-time-high 23,642 applications, Bishop says, a 6.5 percent increase over 2019, the previous record year.

The task of the 18-member admissions staff was to narrow that pool to 3,559 admitted students. For this year’s entering class, that resulted in an acceptance rate of 15 percent, comparable to the most selective universities in the country. To put that achievement in perspective: One decade ago, Notre Dame’s acceptance rate stood at 24.3 percent. Two decades ago, it was 35.6 percent.

Bishop says about 58 percent of these admitted students chose to enroll. Given the last-minute changes of plans, deferment requests and wait-list additions, some 2,070 freshmen are expected to arrive on move-in day in August.

By that time, another 180 students will have enrolled as transfers. Transfer applications — 1,075 in all — were up 46 percent over 2020, Bishops says, driven in part by the University’s success in safely negotiating an on-campus, in-person academic year during the pandemic. “Students and parents saw what Notre Dame did this year to be open and have responded with interest,” he says.

All of which meant hitting admissions goals without the usual benefit of meeting prospective students face to face. “It was an extreme year,” Bishop says without hyperbole.

Admissions staffers used their laptops and the ubiquitous Zoom app to connect with potential applicants. Instead of sitting across a table, they were sitting across the country — or halfway around the world — from teenagers who had questions about Notre Dame.

On-campus tours have been suspended since spring 2020 because of the pandemic, although University officials hope these important in-person points of contact will resume this summer. In the meantime, prospective students have been able to take online “virtual” campus tours, which enabled them at least to see the quads and look inside a classroom, laboratory or residence hall.

The admissions team found other creative ways to engage with prospective students and their families, such as adding student campus tour guides into the virtual information sessions, says Christy Pratt, director of admissions. Admissions staffers scheduled late-night sessions to accommodate students in other time zones and designed special sessions for international students. The office will continue to offer these virtual sessions and tours, which enable staff members to reach more high schools and talk to more students than ever before — and connect with them anywhere on Earth.

An especially notable consequence of COVID-19 was the cancellation of standardized SAT and ACT testing in many locations. As a result, Notre Dame — like most other U.S. colleges and universities — suspended the reporting of test scores as an application requirement.

The University was already considering the possibility of test-optional admissions, a practice that allows applicants to report their scores but does not require them to do so — or penalize applicants who don’t. Prior to the pandemic, Bishop and senior admissions officers visited three selective institutions that have adopted the practice: Bowdoin College, which has been test-optional since 1969; Wake Forest University, which went test-optional in 2008; and the University of Chicago, which made the change in 2018.

“What we learned,” Bishop says, “is that lower-income students will feel more encouraged to apply for admission. At each of these schools, they reported a windfall of high-ability, low-income students. And that is one of our priorities.”

Bishop expects to maintain the test-optional policy at least through 2023. “Testing is not going to be normal for a total of three years,” he says. He and his staff will continue to monitor the policy’s impact. If it works out well, and faculty members indicate no reservations about the academic quality of incoming students, the policy may become permanent.

More than 1,000 U.S. colleges and universities went test-optional prior to COVID-19, according to the National Center for Fair and Open Testing. During the pandemic, at least two-thirds of American colleges adopted test-optional or test-blind admissions for fall 2021 applicants.

Bishop’s concerns about trends in standardized testing and its uses in the admissions process have a long history. He served as a Notre Dame admissions counselor in the late 1970s and early ’80s, then returned to the University in 2010 to lead undergraduate enrollment, which encompasses admissions and financial aid.

“It was my belief when I returned here 11 years ago that most colleges — the most selective colleges — were still somewhat trapped in an overuse of the SAT and ACT to select their classes,” he says. “More than ever in this nation, we were seeing higher income families being able to over-prep and provide higher test scores relative to their student’s potential than other students.”

Test preparation is a growing industry that, for high fees, teaches high school students techniques that help them achieve higher scores on admissions tests. Bishop says the national college-admissions bribery scandal that broke in 2019 called attention to a problem with high-stakes, standardized testing that had been bothering him for years. The scandal involved a conspiracy to influence undergraduate admissions decisions at several elite colleges. The investigation, code-named Operation Varsity Blues, resulted in some criminal convictions and prison sentences.

At issue were basic questions of fairness and privilege in the college admissions process. What attracted most of the media attention were those wealthy parents who bribed coaches and administrators to nominate unqualified applicants as varsity athletes. But Bishop says Varsity Blues revealed testing — and its division of aspiring students into economic haves and have-nots — as the bigger concern.

Early in his career, he says, most students who earned high scores could provide a notably intelligent account of themselves and their goals in their essays and other application materials. These days, he too often sees scores that don’t align with students’ overall academic performance, their essays or letters of recommendation. About five years ago, he contacted the College Board, which administers standardized tests, to express his concern.

Class ranking no longer means what it once did either, he says. Some high schools won’t reveal it; others might designate every student who takes advanced courses and earns a grade-point average above 4.0 as ranking No. 1 in their class.

For their part, some institutions try to game the system by buying mailing lists and recruiting students they don’t expect to admit in order to reduce their admission rate. Notre Dame doesn’t discourage an application from any interested student, Bishop says, but it also doesn’t recruit students whose credentials it wouldn’t regard as competitive.

Even before the pandemic and the adoption of the test-optional policy, he says, the University was reducing its reliance on test scores while boosting the quality of its recruitment efforts. “Ironically, we used the SAT and the ACT less to select the class, and yet our SAT and ACT scores have gone up. We’re using it less, but we improved the applicant pool,” he says.

Admission to Notre Dame is “need-blind” for Americans and permanent U.S. residents, which means these students are admitted on the basis of their academic and personal records, not their financial circumstances. The University is committed to meeting the financial need of a student through scholarships, grants, loans and work.

Notre Dame’s freshman classes are increasingly diverse year by year, reflecting the racial, ethnic, economic and global characteristics of its applicant pool. Some 39 percent of the incoming class are U.S. students of color or international students, up from 30 percent in 2014. A reported 14.3 percent are eligible for federal Pell grants, based on family income, up from 10 percent in 2018. (That figure doesn’t include international students of similarly modest means, who aren’t eligible for Pell grants.)

In the absence of test scores, admissions counselors this year more heavily weighed each student’s transcripts, essays and letters of recommendation. Applications that included test scores were reviewed alongside other indicators of academic ability.

Some numbers change little from year to year. The Class of 2025 is more or less evenly distributed among academic fields, according to students’ stated interests. About one quarter each are planning to pursue majors in arts and letters, in science, in engineering or architecture, or in business. And the class is about 48 percent women and 52 percent men, a ratio determined by Notre Dame’s residence hall capabilities.

As in most years, about 79 percent of the class identifies as Catholic, but that figure is conservative. The application process poses religious identity as an optional question, and Bishop says many lifelong, committed young Catholics choose not to answer it.

About 19 percent of the incoming class are legacies, the children of alumni. Notre Dame continues to lead top U.S. schools in legacy admissions.

If test scores are carrying less weight, what are the primary considerations in evaluating applicants?

Intellectual curiosity, academic drive, motivation, college and life goals and commitment to service, Bishop says. The University isn’t looking for the same kind of motivation from every applicant. “We’re trying to get an appreciation for the complexity of these human beings. And we’re trying to create a diverse group of people where there are lots of different talents, motivations and perspectives,” he says.

Ultimately, the decision about which students to admit comes down to analyzing their drive. Accepted students must be top achievers academically and intellectually, but they also must show they’re driven by goals beyond themselves and for the betterment of society. “We’re looking for the student that’s optimistic,” Bishop says, “but really bothered by the lack of perfection in the world.”

One permanent change in University admissions is the office’s location. In August, undergraduate enrollment will move from the Main Building to offices in the new McKenna Hall on Notre Dame Avenue.

The new quarters will include a first-floor admissions display room with electronic panels that tell the story of Notre Dame and provide information about academics, Catholic mission and student life. A presentation room will host information sessions for visiting students and their families.

Bishop has urged the move for years as a matter of convenience for visitors and current students alike. McKenna is located near the Main Gate — closer to parking, the Morris Inn, the Hammes Notre Dame Bookstore and other spots prospective students ask to see.

It’s also perfectly situated as a starting point for campus walking tours, which will still take visitors to the Main Building, of course. But now, Bishop says, “we’ll be at the front door of campus, welcoming them.”