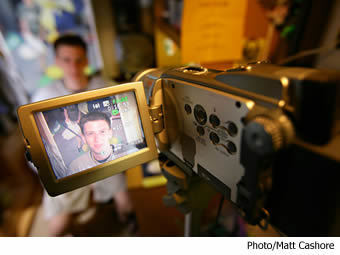 Project: Freshman, as the website calls it, gave digital video cameras to freshmen at six colleges—Notre Dame, Missouri, Florida, Dallas Baptist, Marshall and Wisconsin. The students are supposed to be using them to show and tell about what they are experiencing during their first semester at college. Each is paid $200 a week and gets a year of free AOL and the camera to keep.

A week before he arrived on campus, we e-mailed Conor to find out what he expected the experience to be like.

Why did you want to do this?

I first heard about this AOL job from Shannon Chapla at the University’s news and information department, and I was absolutely thrilled. It sounded like a lot of fun—I mean come on, who wouldn’t want to broadcast their freshman year over the Internet for millions of viewers worldwide?! In all honesty, though, I really wanted to do this because I find Notre Dame to be a very special place, and I would love to show that to other people, and I thought, if they’re looking for someone to represent Notre Dame, I would be the best person to do it. I’ve GOT to do it!

Do you know how or why you came to be nominated?

To be totally frank, I have no idea how my name came up when the powers that be were trying to pick a handful of freshmen from the nearly 2,000 that are starting this fall. I can only assume it was my good looks and exceptional charm.

Do you have any experience with a project of this type?

No. In fact, I think that was a slight attraction for the producers: “Haha, let’s give this expensive video equipment to a kid who has absolutely no experience and make him tape a documentary about his first semester in college. Oh, this is going to be great!”

What was your reaction when you heard you’d been selected?

When I found out I had been chosen, it was a pretty even combination of excitement and nervousness. I was really excited, because I had been interested in this project from the beginning, and I was really keen to participate, but I was also equally nervous because I didn’t have a strong understanding of everything that this would involve. So I was a little worried that I might be in over my head. But let’s not tell AOL about that.

At first I thought this was going to be all about me, sort of like the reality series of my first semester in college. After talking to the producer who’s assigned to me, I have a much better understanding. Most of what I will be doing is the video diary kind of thing, where I will simply be talking to the camera in private, explaining my life and talking about what it’s like to be at college. Then I’ll need to get supporting footage for everything that I talk about. For example, if I talk about the Gold Dome, I should get a shot of the Gold Dome. Or if I say that the work load is really hard, I’ll probably go around asking a few other people whether or not they find the work load to be difficult. Mostly, I’ll need to think about the editing that they will be doing at AOL and give them footage to edit with my confessionals (the video diary part of things).

Are you an AOL subscriber?

No, I had AOL for a while, but once our family got broadband internet, it was cheaper and easier to just use the broadband connection. However, I will be an AOL subscriber now, that’s part of my job too, I need to keep an online diary, and for that I have to be on AOL.