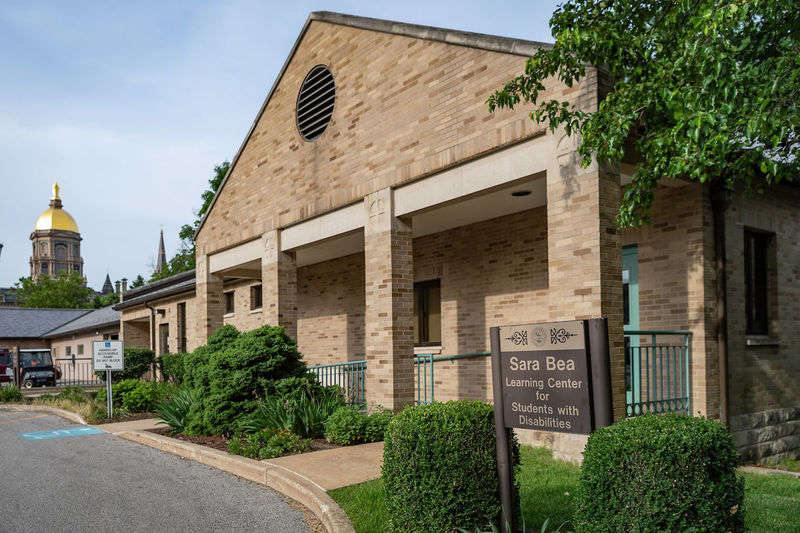 The Sara Bea Learning Center for Students with Disabilities. Photo by Matt Cashore '94

At a university filled with some of the brightest students in the country, it can be hard to stand out — but Emily Daly does. In addition to her eye-catching smile and inviting demeanor, the double major and rising fifth-year is noteworthy for the countless accolades she has received in her time at Notre Dame. She’s a member of the Glynn Family Honors Program. She was a student delegate to the 2016 Nobel Peace Prize ceremony. She’s an RA. For her first thesis (a second is in progress), she wrote a book.

She is also an activist and award-winner in the field of ensuring the rights of students with disabilities, a field she comes to from personal experience.

Emily has dyslexia — what she describes as “a lack of phonetic understanding” — that hinders her ability to read and decode words. She also has dysgraphia, dyscalculia and attention deficit hyperactivity disorder, which, respectively, affect her ability to write coherently, inhibit her mathematical skills, and cause poor concentration. Combined, these disorders and the help (or lack thereof) she receives for them can have a significant impact on her performance. Without accommodations for her “learning differences,” Daly says, her class performance is as though her IQ has dropped by roughly 30 points.

She discovered her differences at a very young age, as both her mother and her late father had dyslexia and watched carefully for its signs in their daughter. Although she was not “officially” tested for dyslexia until fourth grade, researchers at a university near her hometown of Lafayette, Louisiana, gave Daly an early diagnostic test at age two.

They subsequently told her parents, “We’ve never seen anyone come back this positively dyslexic at such a young age.”

Instead of submitting to her learning struggles, though, Daly learned to adapt. Speech-to-text applications read her books aloud. When schools failed to provide adequate accommodations, her mother spent hours each night reading to her daughter or helping her transcribe class notes from memory.

“My family always treated it as, ‘You have brown eyes. You have blonde hair. You’re dyslexic. There’s nothing wrong with you. You just process information in a different way,’” Daly says. Their support influenced both her success and, eventually, her college major.

“My family gave me an ultimatum when I went to college. They’re like, ‘OK. You’re from Louisiana; you’ve got two things that you can study. You can study petroleum engineering or art history,” she says with a laugh. “I wanted to do neuroscience. I’m like, ‘You know what, I can do a supplementary major in art history.’”

Confident in what she would study, Daly’s toughest choice was finding a school that would help her do so successfully. Students diagnosed with learning disabilities have a legal right to accommodations, but those rights were often tested in her high school years. Some teachers complained that she didn’t “struggle enough;” others allowed her accommodations on tests but not in class.

With those experiences in mind, access to resources became a particular point of interest during college visits. At many universities, Daly was shocked by the lack of assistance provided to students with learning disabilities.

This response frustrated her. The schools she was applying to were some of the best schools in the country. Their students were not of “average intelligence.”

And then she visited Notre Dame. An unseasonably cold weekend for the Reilly Spring Visit Program plus a lost suitcase left Daly with just shorts and a T-shirt for her first encounter with a South Bend winter — a mishap that, she says, brought Notre Dame’s strengths to the fore. Her host for the weekend took the jacket off of her back to let Emily wear, and the University took her shopping. When it was time for her and her mother to visit the Sara Bea Center for Students with Disabilities, they were prepared to fight for her rights. But they didn’t need to.

Notre Dame was willing to give Daly all the accommodations she required, including 100 percent extended time on tests, and to provide her a scribe and a reader as needed for her classes. 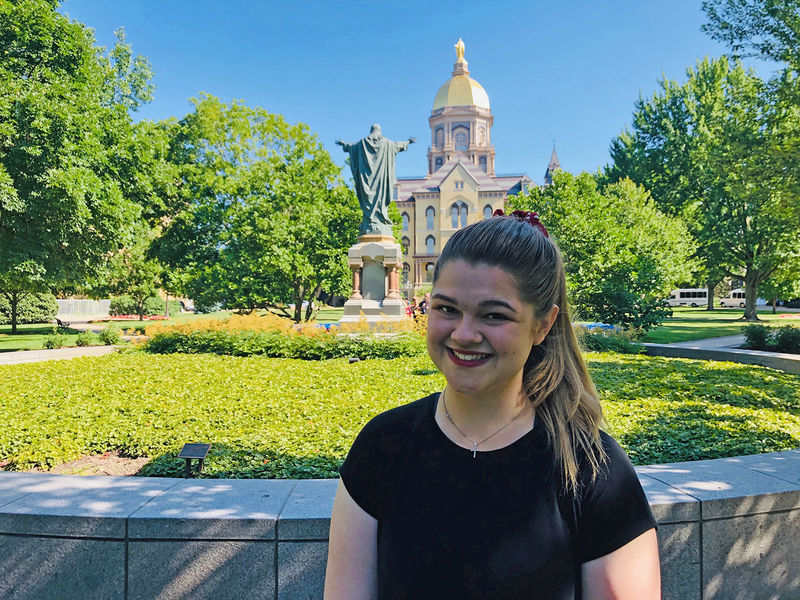 “It was just so accommodative when all of the other places that I went to had said, ‘Basically, you’re going to be treated like a second-class student. We’re not going to put you at the forefront of everything and make sure you can still achieve at this high level.’”

With the University supporting her endeavors, Daly has learned “how to turn an anchor into a grappling hook.”

“I’m actually very grateful to my dyslexia because it taught me how to work very hard,” she says. “Freshman year I saw a lot of people struggling because they never had to learn how to study before. I knew how to study — it was just keeping up. I was ready to work harder than everybody else there. That really not only kept me afloat, but gave me the confidence that, ‘OK, this can be done, even though you are struggling so much.’”

Along the way, she has learned both to work through difficulties and to speak up for herself and her needs. Daly says she explains her disabilities to each of her professors at the start of each semester and works with them and the disabilities office throughout the term when she needs to be accommodated.

Though friends, dormmates and professors have been unfailingly helpful, Daly says that gaining the courage to advocate for herself — whether that’s asking an RA to read a homework assignment aloud when a text-reader malfunctioned or figuring out a way to fulfill a foreign-language requirement when reading and writing is a challenge even in English — has been an ongoing process.

“I’m grateful that I’ve gotten to the point where I have the courage to do that.”

Daly has met students at Notre Dame who have learning disabilities but refuse to seek assistance from the Sara Bea Center, a habit that she says sacrifices a student’s full potential in favor of avoiding stigma. Some, she explains, fear that they may be seen as less intelligent if others know about their diagnosis.

“It’s great to have inspiration and people to look up to, and that’s why I try to be very vocal about [my differences],” she says. “The only way to end a stigma is to be a counter-example to it.”

Though counter-examples like Daly sometimes appear in popular culture, she believes that they are often misrepresentations, or one-dimensional characters whose personalities are reduced to just their diagnoses. The novel she wrote for her first thesis — a Victorian-era, comedic murder mystery called The London Geist — attempts to work against this trope.

“In my book, I gave the main guy character all of my learning disabilities, but I never named them,” she says. “Instead of reading letters to himself, he handed them to a friend and said, ‘Read this out loud.’ And that’s not an odd behavior. Or he was employed to do some math for something, figure out some calculations, and he hired a student to check his math for him. I made him very ADHD so he’s bouncing around topics. Nothing that people would necessarily click to, like, ‘This is that,’ but they would be like, ‘Oh, this is natural.’”

She is in the process of sending the book to publishers this summer and is working on writing the second in the series. At the same time that she tackles the sociocultural side of her disabilities, she’s also working on the scientific side through her research in neuroscience.

Riding a bus on the way to a recent National Dyslexia Conference, she had the opportunity to sit next to an MIT professor. Within minutes of talking to him, she was able to produce a solution to a problem that had taken his team five years to discover. Daly thinks that her own understanding of dyslexia could be a great benefit in learning more about the neurological differences that cause it.

She plans on attending graduate school to research learning disabilities and help further our understanding of neurological differences. “They just don’t have anybody studying dyslexia who is dyslexic,” she says.

Future advancements in accommodative technology (and its accessibility) seem likely to Daly, and she predicts that dyslexia will be an inconsequential diagnosis within the next century. But she wants to help now.

“What I am really trying and hoping will happen in the education system is that different ways of expressing oneself and going around information will become more prominent,” she says. “I just hope that education becomes not necessarily only more accommodating for people with learning differences, but [made] to where you can learn differently and not be alienated for it.”

With people like Emily working to understand the brain processes behind these differences and help destigmatize them, the future for students like her looks as bright as her smile.

Nicole White is an intern at this magazine.