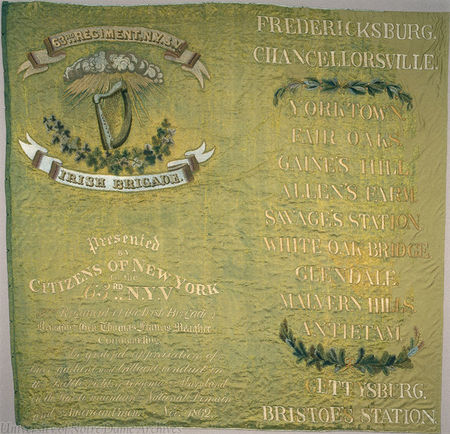 Courtesy of the University Archives

Like many Civil War veterans, Rev. William Corby, CSC, chaplain of the 88th New York Regiment, cherished his wartime friendships and memories. That passion became an avocation upon the priest’s return to campus. In addition to helping organize the Notre Dame post of the Union veterans group the Grand Army of the Republic, Corby penned Memoirs of Chaplain Life in 1893 and sought Civil War artifacts for the museum at Notre Dame.

In 1896, U.S. Rep. James D. Brady (R-Va.) gave Father Corby the piece pictured here: the Second Irish Colors of the 63rd New York Regiment, one of the predominantly Irish-American units that comprised the war’s so-called “Irish Brigade.” Brady had owned the flag since the end of the Civil War.

A few years after the Second Irish Colors arrived at Notre Dame, it was put on display in Main Building and, later, relocated to Lemonnier Library (now Bond Hall) when it opened in 1917. From there it moved to the old ROTC building (now West Lake Hall), to the Snite Museum of Art, and to the Pasquerilla Center, home of Notre Dame’s Army ROTC. In 1998, the flag was accessioned into the collections of the University Archives.

Even in 1896, the Tiffany & Co. silk-embroidered flag’s blemishes were assumed to be evidence of war. But this flag was never carried into battle. It was commissioned by prominent New York merchants and was delivered to the Irish Brigade after they had lost half of their men at the Battle of Fredericksburg in December 1862.

Through the generosity of Jack and Kay Gibbons, conservation and restoration work on the Irish artifact began in February 2000. The enormous undertaking was completed that September, and the 70 inch by 72 inch flag, mounted and framed for preservation, was displayed in Notre Dame’s Eck Visitors Center and, later, in an exhibit at South Bend’s History Museum. Due to its delicate nature, the flag must rest in storage after being displayed. However, the Second Irish (Tiffany) Colors of the 63rd New York Regiment is always available for serious scholars to view.