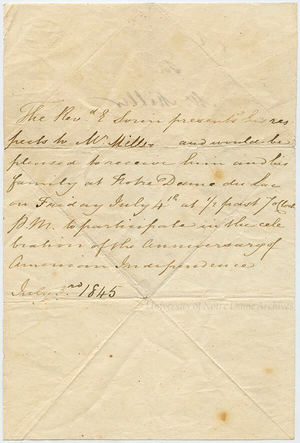 Handwritten invitation to W. Miller from Rev. Edward Sorin for the July 4th celebration at Notre Dame in 1845. Click to enlarge.

In July 1845, the fledgling University of Notre Dame finished its first academic year under the roof of its first Main Building. Throughout the year, about forty students — mostly boys under the age of 12 — came to campus, though not all for a full term. The faculty was also somewhat transient, with the constants being founder and president Rev. Edward Sorin, Rev. François Cointet, Brother Gatian, and seminarian François Gousse.

Sorin, along with a growing community of priests, brothers, and sisters, was acutely aware that the predominantly Protestant residents of South Bend were wary of the Catholic institution that had been established next door. To build a harmonious town and gown relationship, Notre Dame had to extend its hand.

Notre Dame’s Council decided that July 4, 1845, would be a prime opportunity for the University to engage with the public. The original plan for the holiday was for the students to celebrate quietly at the home of Samuel Byerley, an early benefactor, with dinner and fireworks. But the Vatican-aligned institution run by a French congregation quickly realized that a public celebration would better align it with its American neighbors. Father Sorin’s handwritten invitations were sent out to prominent Catholic and Protestant families the day before the event, and the response was tremendous.

The doors of the University were opened to the public, and the students and faculty presented an evening of entertainment, commencing with a reading of the Declaration of Independence. After the event, Sorin wrote the following to his superior, Rev. Basil Moreau, back in France:

“This was a spectacle as surprising as it was agreeable to our American neighbors, to witness the anniversary of their independence celebrated in this way in a house peopled by foreigners from the corners of the world. Later they will understand why we rejoice with them on this same day. The Constitution guarantees to us also certain privileges which we have not yet been allowed to enjoy fully; but the day when we do cannot be far off.”

Notre Dame’s first real introduction to the local community was a success as xenophobia began to wane through the building of personal relationships. On this most American of holidays, Father Sorin and his Notre Dame both began the process of Americanization as they reshaped their European attitudes in order to navigate their new, star-spangled culture.