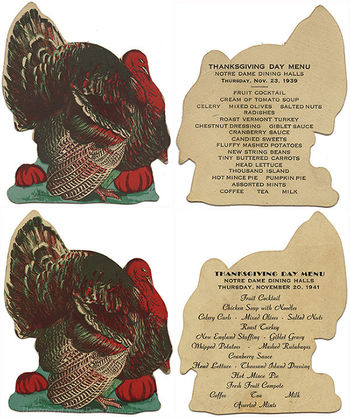 The menus for Notre Dame's Thanksgiving meals in 1939 and 1941. Click to enlarge.

As Thanksgiving Day approaches, the Notre Dame community may be increasingly preoccupied by the thought of what delicious fare they might partake in at the annual feast in North Dining Hall. In 1939, Notre Dame students likely found themselves pondering the same thoughts as they counted the days until they reached the red-inked November 30 printed in their calendars. They, and much of the nation, were surprised when President Franklin D. Roosevelt unexpectedly announced that Thanksgiving Day would be moved forward one week to November 23 and would henceforth be observed on the second-to-last Thursday of November.

Until 1939 the accepted date had been the last Thursday of November, as proclaimed by President Abraham Lincoln in 1863. In the midst of a civil war, Lincoln had implored that the American people embrace this day of gratitude, healing, and harmony in an effort to unify a divided country. It was more shocking that President Roosevelt declared, “There is nothing sacred about the last Thursday of November,” and explained that his motivations were purely capitalistic. In hopes of lifting the economy during the final years of the Great Depression, Roosevelt believed moving Thanksgiving Day forward would encourage early Christmas shopping and boost retail sales. Protests poured in and many took his words as an affront to Lincoln’s heartfelt plea and the American tradition. Universities scrambled to change their academic schedule, printers lamented the calendars that had already been made for the next year, and college sports fans puzzled over how the date change would impact Thanksgiving football games.

Irked by the upheaval caused by Roosevelt’s announcement, the public began to irreverently refer to November 23 as ‘‘Franksgiving,’ while November 30 was considered by many to be the legitimate Thanksgiving Day. The Notre Dame Scholastic posed the question to students, “Did you observe Franksgiving or Thanksgiving?” and noted that students at Harvard University would enjoy Thanksgiving dinners on both the 23rd and the 30th. They hinted heavily to Notre Dame dining hall staff to follow suit: “The Dining Hall may get the idea, but I wouldn’t hold my breath if I were you.”

The festive turkey-shaped menus shown reveal that Notre Dame ultimately observed Roosevelt’s Thanksgiving Day on November 23, 1939 and November 20, 1941. The dining hall offered a bevy of popular dishes of the time, such as hot mince pie, giblet gravy, and mashed rutabaga. Meanwhile, some Americans still observed the last Thursday of the month. It wasn’t until December 26, 1941, when President Roosevelt signed legislation officially making Thanksgiving Day a national holiday, celebrated on the fourth Thursday of November.