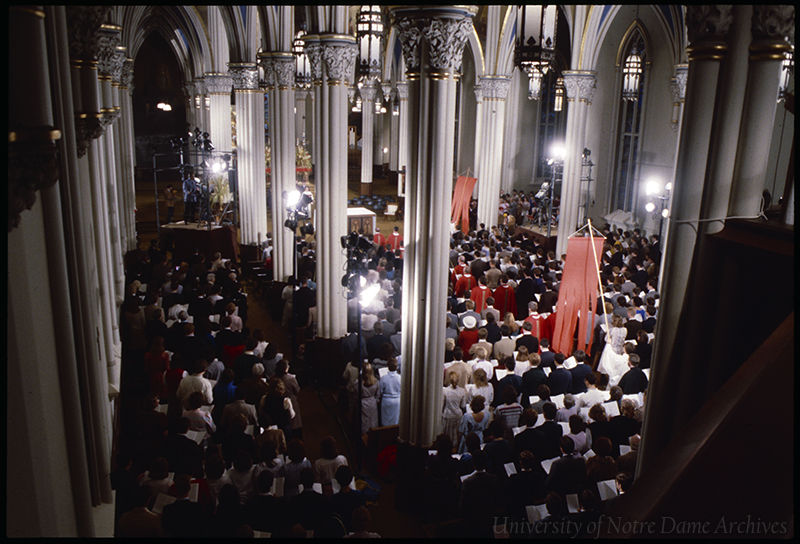 For many years, the National Broadcast Company aired religious programming on Sunday mornings. The schedule included live telecasts of services from outposts of major world religions, so when Notre Dame hosted the National Conference of Catholic Bishops in the final days of Lent, 1985, a Notre Dame Mass was a natural candidate for NBC’s weekly broadcast. While Notre Dame had televised masses locally on occasion, this Palm Sunday service from the then-Sacred Heart Church would mark the first time that a Mass was nationally broadcast from our campus.

The live broadcast was quite a production, costing $200,000. An NBC crew of around 30 people arrived on campus the Tuesday before Palm Sunday to begin setting up. Banks of 85 additional lights were installed to support the five television cameras, voiceovers were recorded and shots of campus were taken to be incorporated into the final production. The tight script for the Mass was rehearsed to fit the Passion into just under an hour, with only four minutes allotted for University President Rev. Theodore Hesburgh's homily. Seating for the event was ticketed, with preference given to those who regularly attended the 10:00 a.m. Mass.

While an incredible amount of work, the 1985 Palm Sunday Mass was an important opportunity for Notre Dame to reach a national audience. It perhaps planted the seed of airing nationally broadcast masses more often, especially as advances in technology and equipment made the idea more practical. The Hallmark Channel began regular broadcasting of the 11:00 a.m. Sunday Mass in July 2002, and a few years later added a Sunday-morning screening of the previous night’s vigil. In 2008, CatholicTV began picking up the broadcasts, in addition to live streaming introduced that year through Campus Ministry's website.

After nearly twenty years of broadcasting weekly and special masses from the Basilica of the Sacred Heart, the current production is much less intrusive for the congregation than it was back in 1985. Robotic cameras are discreetly mounted throughout the Basilica, and the pacing and timing of the Mass is more second nature. These broadcasts serve an important ministry by allowing those who are unable to travel to the Basilica, either due to infirmity or distance, to join the Notre Dame community in the celebration of Mass every Sunday.