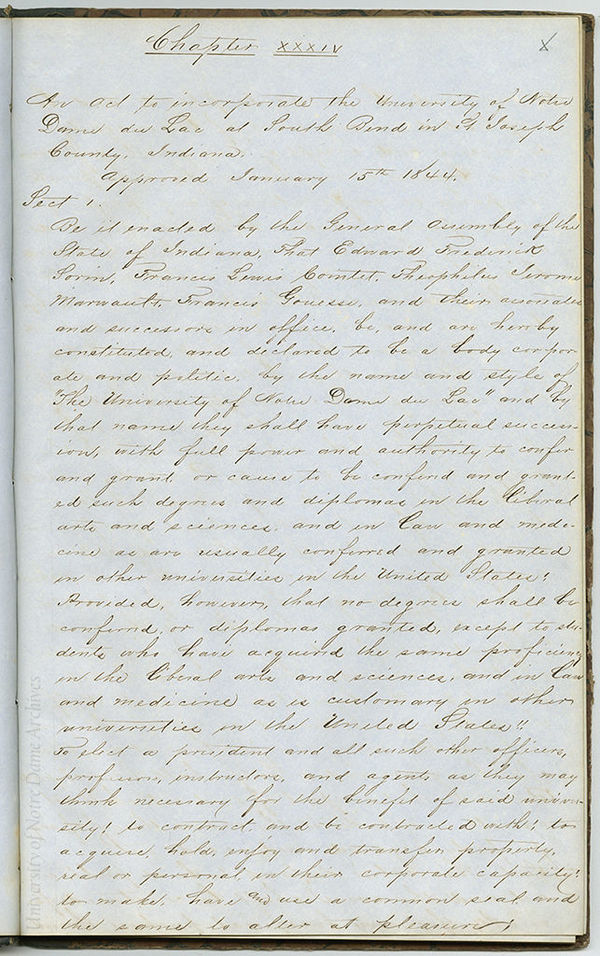 In August of 1841, Rev. Edward Sorin and six Brothers of St. Joseph left the motherhouse of the Congregation of Holy Cross in Le Mans, France, for the mission site of Vincennes, Indiana. Fr. Sorin intended to establish a college nearby — education, after all, was (and is) a pillar of the Holy Cross mission — but the bishop of Vincennes, Célestine Hailandière, felt that the area’s proximity to other educational institutions precluded the need for a new one. He instead offered them an alternative: a plot of land in northern Indiana, about two miles north of South Bend.

Arriving at Notre Dame du Lac in November 1842, Fr. Sorin and a group of seven brothers began building structures for the school — first a new log chapel, then what is now Old College, and other utilitarian buildings. More help arrived the following summer in the way of priests and sisters from France, and progress on the first Main Building began (behind schedule) in August of 1843.

Even with all of the construction, there was an important piece of the venture still missing: an official sanction from the Indiana state government. John DeFreese, an Indiana state senator and friend to Notre Dame, saw the economic importance of having an institution of higher learning close to South Bend. He championed the cause in December 1843, introducing a bill to the state legislature to incorporate the University of Notre Dame du Lac.

The 28th session of the General Assembly of the State of Indiana passed the act of incorporation on January 15, 1844. Although construction on Main Building was only halfway complete and there were only a handful of students, Notre Dame now had the full legal authority of a university to confer “diplomas in the liberal arts and sciences, and in law and Medicine.”

The handwritten copy of the charter shown above occupies just three pages in an otherwise blank ledger book. The “Chapter XXXIV” header indicates that this was the 34th local law passed in the session, but Chapter XXXIII concerned our campus as well: it granted a charter to the Brothers of St. Joseph, giving them authority to operate a Manual Labor School at Notre Dame. In his Chronicles of Notre Dame du Lac, Fr. Sorin noted, “[t]he two charters, each in its kind, conferred all the privileges that could be granted by the government, and will remain in the archives as the most precious monuments that could be in its possession.”