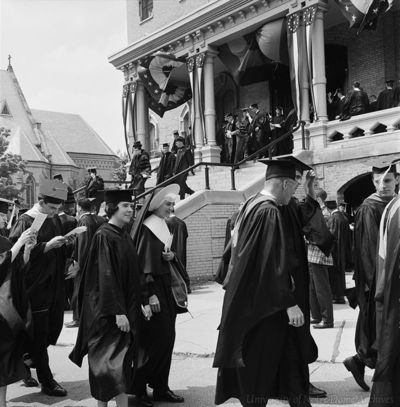 Students Processing down the Main Building steps during Commencement, 06/05/1966

Notre Dame graduates today may get to process through the tunnel of the stadium together, but for most of the 20th century, the pre-commencement procession began with another campus landmark: the steps of Main Building. On graduation day, students and faculty would process down the steps and across campus to the venue where the academic degrees were conferred, such as Washington Hall or South Quad. The procession occasionally began elsewhere in the 1940s and 50s, but even then, students had the opportunity to descend the steps the day before graduation as they made their way to Sacred Heart for the last class visit to the church.

Although their degrees had not yet been officially conferred, this organized procession legitimized the students' status as Notre Dame graduates in a nod to the tradition of avoiding the Main Building steps until commencement. Undergraduates were the particular target of this tradition, but it is interesting to see graduate students — the ones wearing academic hoods in the above photograph — also participating in the traditional procession instead of joining up later. (It’s also interesting to see women at the center of this pre-1972 photo, but, to those in the know, it’s not surprising. Over 4,600 women, including Holy Cross sisters and laywomen as seen here, graduated from Notre Dame at the spring, summer, and winter commencement ceremonies between 1917 and 1972. More on their history can be found here.)

It is unclear exactly when the traditions surrounding the steps originated. In 1919, a “University rule” restricted the Main Building steps and porch to faculty and visitors only, with students required to enter the building from the ground level and use interior staircases — but the policy seems to have applied to daily use only, as the steps were still used by undergraduates for sanctioned events like group photos, concerts, and religious ceremonies. It is not clear if there were any specific official sanctions for students violating the staircase rule, but unofficial punishments developed with time in Notre Dame lore. No doubt there have always been students who bucked the tradition, not subscribing to the superstition of not graduating and not fearing a toss into St. Mary's Lake by fellow students if caught on the steps.

Commencement in 1970 was the last time graduates descended the Main Building steps as a group in formal ceremony. Commencement exercises moved to the newly-opened Athletic and Convocation Center in 1969, and the Seniors’ Last Visit to Sacred Heart was dropped from the schedule in 1971. The processions for these events no longer originated in Main Building, thus eliminating the ceremonial first use of the steps.

There has been renewed interest among undergraduates in holding to this tradition, although the “University rule” is long abandoned. While not part of the formal Commencement schedule, the steps today are a place for students in cap and gown to gather with friends and family, pose for photos, and celebrate their newly minted diplomas from Notre Dame.