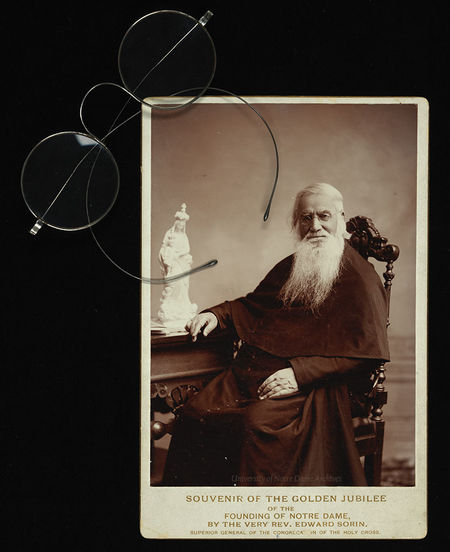 Courtesy of the University Archives

Dating from the 1880s, Father Edward Sorin's wire-framed spectacles are one of the most recognizable artifacts in the University Archives' holdings. Edward Frederic Sorin was born on February 6, 1814, in the small town of Ahuillé, France. As a young man, he studied the classics before entering the diocesan seminary, and he was ordained on May 27, 1838. Shortly after ordination, Father Sorin joined the Congregation of Holy Cross (C.S.C.). Almost a year later, Father Sorin and six Holy Cross brothers were selected by their superiors to embark on missionary work in the United States. And, in November of 1842, Father Sorin and seven of his C.S.C. brothers founded the University of Notre Dame. In a letter written to Father Basil Moreau on December 5, 1842, Father Sorin wrote, "This college will be one of the most powerful means of doing good in the country…at least such is my firm conviction, time will tell whether I am deceived or not." Despite many crises that challenged Notre Dame's early years, Father Sorin's decisive leadership and commitment would define the future path of Notre Dame.