Once upon a time Georges-Ibrahim Cisse wanted to be an astronaut. He liked the idea of going fast and far into outer space. But it was Dexter’s Laboratory, an offering from the Cartoon Network, that set the youngster from the Ivory Coast on the career path he’s following today. Georges liked that the child scientist was “always hiding from his parents, doing cool experiments and creating stuff.” 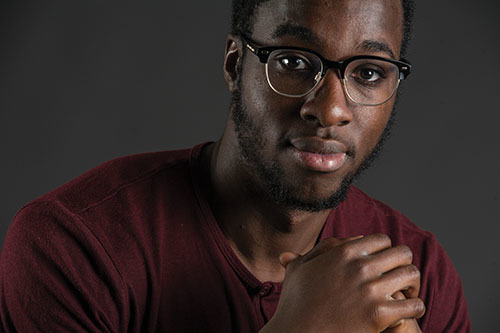 Cisse’s father is a Muslim who works for an insurance company; his mother is a Christian and a business consultant. Both believe in education; Georges and his two sisters attended French-based Catholic schools. His childhood, he says, was calm and peaceful, although the Ivory Coast — Côte d’Ivoire — was wracked by civil war and torn between two presidents trying to govern simultaneously.

At 16, he enrolled in the African Leadership Academy. Classes were taught in English, a language understood by 90 percent of the students; Georges knew only French, which he had assumed everyone on the continent spoke. After a tough adjustment period, the aspiring scientist did fine. He played soccer, was captain of the Ultimate Frisbee team and, during an interhouse dance competition — when no housemates showed up to dance — he danced alone in front of the whole school and says he enjoyed it.

He likes facts; he likes to base judgments on the evidence. He describes himself as grounded, a realist. He likes Notre Dame (although it’s colder than he anticipated). He likes the academics, the research opportunities, the practical learning experiences. He likes Notre Dame football and “the spirit of the place.” He’d like to travel more — although he has been to 10 African countries, Europe and the United States.

He wants to better understand life on Earth, the human body; he’d like to do more to help the continent where he grew up and, while realistic about the state of the world, believes the young people he knows can make a better tomorrow. He has studied biology because he doesn’t like to see people suffer and knows too well what disease has done to Africa.

Last summer he was at the National Institutes of Health in the Washington, D.C., area, conducting research on DNA (more specifically, he explains, “the impact of the Tf1 retrotransposon on the survival of Schizosaccharomyces pombe cells exposed to environmental stresses”) and this summer is in South Africa at the KwaZulu-Natal Research Institute for Tuberculosis and HIV (focusing on “the gag-protease replication mechanism of a panel of HIVs”).