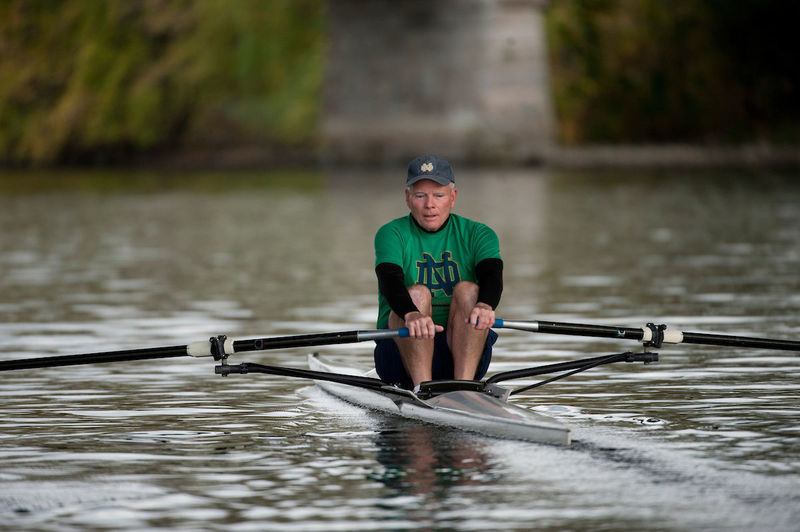 Joe Kernan was once a regular on the river near the park that now bears his name. Photo by Barbara Johnston

Editor’s Note: Joe Kernan’s life of public service was featured in the story below, published in the summer issue of this magazine. The former prisoner of war, South Bend mayor and Indiana governor, who suffered from Alzheimer’s disease, died July 29 at age 74.

Joe Kernan ’68 and his friends used to have euchre nights. Years ago, when Dick Nussbaum ’74, ’79J.D. was getting to know Kernan, and just learning the game, he found himself playing against the future South Bend mayor and Indiana governor, the political leader he would serve as a trusted legal adviser.

With the advantages of an experienced partner and good cards, Nussbaum the novice won. Losing didn’t sit well with Kernan, who said, “A gorilla could have played those hands,” an expression of the ravenous competitiveness that rec league softball opponents and umpires, golf partners — even fellow prisoners of war in Vietnam — have witnessed.

Kernan, a Navy flight officer, was shot down over North Vietnam in 1972 and spent the next 11 months in Hoa Lo Prison — the “Hanoi Hilton.” Tom Cuggino ’68 recalls thinking that, if anyone could endure life as a POW, it would be Kernan, his former Notre Dame baseball teammate. “Because he’ll make some sort of a game out of it and beat them,” Cuggino says in a 2019 Legends of Michiana public television special.

Kernan organized little challenges among American POWs, testing skills like throwing pumpkin seeds closest to a wall, ostensibly meant to keep everyone’s mind occupied. Kernan occupied his own, as usual, with the dogged pursuit of victory.

He came up with a game to play against cellmate Lynn Guenther, an Air Force pilot, before they went to sleep. They would ask each other insignificant questions — trivia — another distraction from interminable days and nights in captivity. Arcana from The Guinness Book of World Records, which Kernan had pretty much committed to memory, became his competitive advantage. He deployed questions like: “What’s the world’s record for spitting?” Guenther, naturally, had no idea.

“Needless to say, I owed him 42 cases of beer when I came home,” Guenther says in the Legends of Michiana special.

The tears pooling in Guenther’s eyes make it clear he holds no grudge. Instead he describes himself as the luckiest possible POW because he shared a cell with Kernan. People across the many intertwined strands of Kernan’s life share similar sentiments.

Kernan’s voice will not be heard here. That’s in part because he would never say the things about himself, or tell the stories of resolve and sacrifice, that those closest to him know to be true. But it’s also because Alzheimer’s has robbed Kernan, 74, of the ability to speak. So they speak for him, as he raised his voice on their behalf for decades in public life and in untold private acts of generosity and service.

Much as Kernan reveled in elbowing out the competition, his relentless will to win translated into a fierce loyalty to his team, a concept he defined in expansive terms, ultimately encompassing the city and state that he led. During his tenure as South Bend mayor from 1988 to 1997, he kept his phone number listed and residents often called him at home. He’d listen to their concerns, usually delivering a note to the appropriate department the next morning. Sometimes he took care of a request personally.

“He was happy to go out and shovel snow for them,” says Kernan’s wife, Maggie, an example of the many ways he demonstrated his love for the city and its citizens.

In those days, there was a home on a busy street with the front yard adorned in colorful impatiens, a fireworks display of flowers. Driving by one day, Kernan stopped and fished out one of the cards he carried to jot down complaints when constituents cornered him, or to deliver little messages like this: “Thanks for making South Bend so beautiful,” he wrote, and tucked the card into the front door.

“Who does that?” asks Denise Sullivan, a lifelong friend who worked as an assistant in the mayor’s office. “He just took that little moment to say thank you for somebody planting flowers in their yard.”

Sullivan, now a project specialist in the Notre Dame president’s office, recalls the importance Kernan placed on a personal touch and the cumulative power of small gestures that foster a sense of community. School visits were a priority for him as mayor. He loved interacting with kids, reminding them that South Bend was their city and giving them an assignment, a way to assume a sense of ownership of their hometown. Pick up one piece of litter every day, he instructed the students, to make their neighborhoods just a little nicer. If everybody does that, he’d say, South Bend would be the cleanest city in the country.

Kernan’s ability to connect and inspire at a personal level could be called retail politics. In his case, it also just reflected the genuine Joe, a retail person.

“He could walk into any part of town and strike up a conversation with people and sometimes you’d swear they’d known each other for years,” says Lou Pierce, a former WNDU-TV executive and now president of Big Idea Company, a regional public relations and marketing firm. “You find out later that they just met at that moment.”

The better they knew him, the more the people of South Bend appreciated Kernan, voting him into office with ascending majorities of 53, 76 and 82 percent from his first electoral victory in 1987 to his third in 1995.

He had his critics. The city’s financing deal to bring the College Football Hall of Fame to town in the early 1990s stirred passionate opposition — perhaps prescient, given the lackluster performance of the museum, which moved to Atlanta in 2014 and ended up costing South Bend millions.

Others credit Kernan as one of the catalysts of development that has revitalized South Bend. As mayor, he and former Notre Dame president Rev. Edward A. “Monk” Malloy ’63, ’67M.A., ’69M.A., worked together to establish the Center for the Homeless, an early collaboration in what has grown into a bountiful town-gown partnership. And Kernan’s service to the city extended long past his time in office.

He spent six and a half years in Indianapolis as lieutenant governor, then completed the gubernatorial term of Frank O’Bannon, who died in 2003. During his brief tenure as governor — he lost in 2004 to Mitch Daniels, now Purdue University’s president — Kernan became Indiana’s first chief executive to commute a death sentence in nearly half a century. After an exhaustive legal review and consultation with spiritual leaders including Malloy and Father Ted Hesburgh, Kernan accepted the parole board’s unanimous recommendation not to execute convicted murderer Darnell Williams months before the 2004 election.

“He would take an action that was the right thing to do,” Nussbaum says, “whether or not it was politically expedient.”

Back home in 2005, Kernan cobbled together an investment group to buy South Bend’s minor league baseball franchise, preventing its sale to an owner who planned to move the team. Over six years as team president, Kernan spruced up the ballpark and developed a vision that made a buyer out of Andrew Berlin, the Chicago business executive who could commit more money to enhancing the stadium and surrounding area into what’s now a popular downtown attraction.

When Kernan took over the team, Pierce says, “nobody else was doing anything downtown — and you can check the records. It was like downtown was the plague. And if not for Joe, no Andrew, no other investment in downtown. Joe really made it happen.”

Some people thought Kernan and his investors were getting rich on a baseball boondoggle, but his wife might have appreciated the project more if they had. “I was not as happy about the baseball thing,” Maggie Kernan says, “but to him it was like a gift for South Bend.”

During the coronavirus pandemic, she’s been able to see her husband only through a fence from the patio of his care facility. The anguish of those visits comes not only from the distance between them, and the effects of a cruel disease, but the echoes of his confinement in Vietnam.

“When I see him like that,” she says, “I think, ‘You’ve always wanted your freedom.’”

Much has been denied him, but whenever he was at liberty, Joe Kernan gave freely.