Port-au-Prince is by far the dirtiest place that I have ever been to. Plastic shopping bags cling to hillsides and ledges, randomly distributed by the drainage of repetitive torrential rains. Pieces of old clothing, shredded and discolored, protrude from layers of dirt like the strata of an archeological dig, marking the time in history when they were deposited there. Empty eight ounce bags of water sit on the street or sidewalk or gutter where they were tossed after being consumed in a few rapid gulps.

It’s not just that there is litter on the streets. Every city with so many people crammed into such a small space is going to have litter. New York City is infamous for the litter that swirls around the streets and for the smell of urine in the subway. But we’re not talking scattered litter or a trickle of urine — all but the richest parts of Port-au-Prince has piles and mounds and embankments of garbage anywhere that trash can physically collect. Ravines of trash line roads that are elevated from the surrounding areas. Dry river beds that fill with water during rainy season spend the rest of the year covered with refuse, sewage and motor oil drainage from the occasional rain. When it downpours in summer, rivers of trash rush down the gutters on the side of the hilly streets often traveling more than twenty miles per hour. Rivulets of filth dance and swirl in flat portions of the city, filling potholes with garbage, forming innumerable tiny little landfills. And, of course, there is still rubble from the earthquake spotting the landscape of the city as well. After a while in town, you don’t notice the litter all that much, but instead notice the areas that are clean. 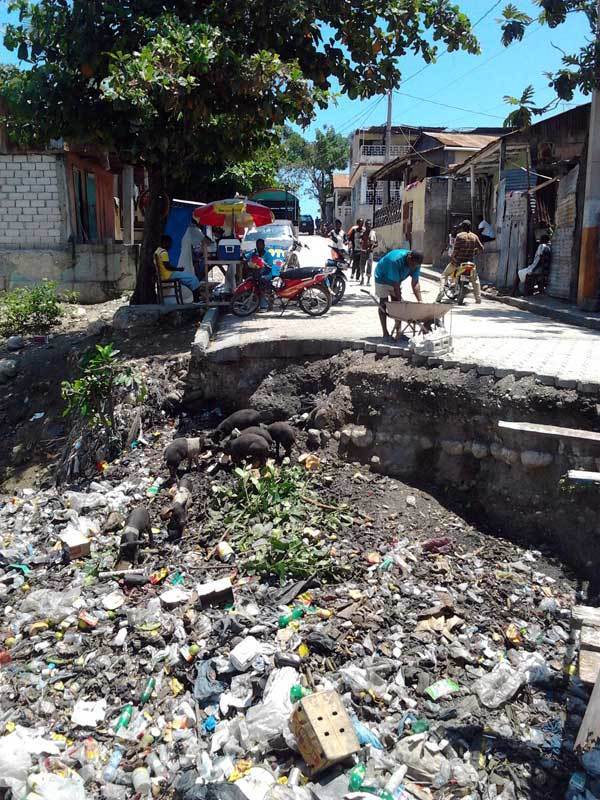 Without organized trash collection, families either burn the trash or place it in neighborhood dumps, discard it on street corners or at main intersections, cars swerving to avoid the massive piles. Other dumps are corners of unclaimed property, just outside the wall of a home or business, invariably with a spray-painted sign that reads “SVP pa jete fatwa la” — Please don’t dump garbage here. About once a month, a garbage truck comes through and four men shoo away the animals and shovel the refuse into the back of the truck, leaving only a single layer of trash closest to the ground.

The trash attracts people and animals, each looking for a way to eat. People rifle through refuse to collect plastic soda bottles to redeem for cash at recycling dumps. The rest of the garbage piles up and is picked through by hungry dogs, chickens, goats, and pigs, a micro-ecosystem within the tumult of the city. The low-lying drainage ditches filled with waste are most popular with the pigs, perhaps because there is murky water to moisten the slop.

Public restrooms are nonexistent in Port-au-Prince, and the population lives accordingly. Growing up in poverty and close quarters, many Haitians don’t share the Victorian sense of shame common to Americans. Men urinate on the street in broad daylight, eschewing dark corners for busy streets, outside houses and businesses. In well-paved areas, they end up standing in the urine as it runs downhill under their shoes. Women usually squat in quieter corners or over a sewer grate, careful to avoid wetting their dresses. At the hospital, port-a-potties are found in the rear of the facility. Some people make use of the facilities but many others, who may not understand the reason for the odd little cubes, choose to urinate directly on the outside of the blue plastic bathrooms instead of inside them. It’s impossible not to love the irony of a woman squatting over concrete on hospital grounds while balancing herself against the outside of a toilet. 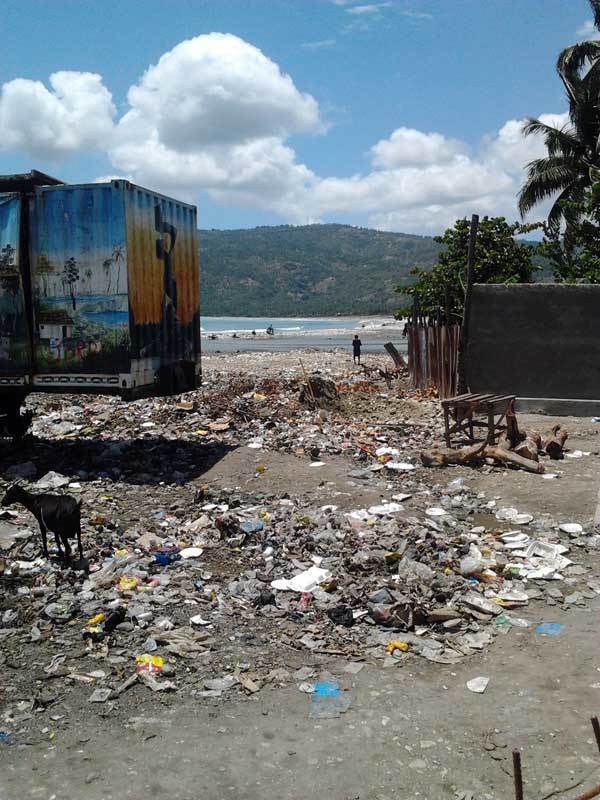 Jacmel, the only other Haitian city that I’ve visited, has less garbage on the less populated streets, but still has the mounds of trash outside of homes and ravines filled with refuse and pigs. The beach of Jacmel, ostensibly the life-blood of the tourist town, serves as one of the town dumps, teeming with animals walking along the sand in front of crystal blue water. The large towns in the central plateau do a fine job of maintaining some semblance of order and cleanliness in their central parks and main thoroughfares.

The countries that I have been to have dealt with waste removal in different ways with varying degrees of success. Rwanda’s cleanliness serves as a stark contrast to Haiti — there is not a plastic bag in sight because they are outlawed. The streets are cleaned by paid workers several times per week, and once a month each community must perform an obligatory cleaning of their section of town. In Honduras, beautiful fields of corn or grass are spotted with plastic bags, soda bottles and broken bottles of beer or rum. People toss garbage out the window of moving buses, ignoring where in the beautiful landscape it lands. Tegucigalpa and Managua, the capitals of Honduras and Nicaragua, respectively, have roughly the same amount of random trash strewn here and there about the street, but much less than Port-au-Prince, and they typically segregate large collections in official city dumps. Uganda’s capital of Kampala has more garbage on the main streets but has women in orange bibs bent over with knee-high brooms, sweeping it away side to side in time with their steps, like an elephant’s trunk swaying as it lumbers along. Istanbul and Venice have unsightly trash floating along their plentiful waterways, but not enough to obscure the beauty of the architecture and the culture.

The mounds of trash and poor sanitation in Port-au-Prince are a serious environmental issue and have a direct impact on the health of the population. Burning trash contributes to the cloud of smoke over the city and undoubtedly leads to increases in respiratory infections in children and worsens asthma and other respiratory diseases. The lack of access to latrines, combined with an incomplete understanding of hygiene surrounding toileting, contribute to the epidemic of cholera that is raging through the country. It also maintains the simmering endemic diseases of hepatitis A, typhoid, intestinal parasites and E.coli. Drainage ditches that fill with water and sewage provide a breeding ground for mosquitoes and flies that spread such diseases as malaria, dengue fever and diarrheal illnesses. Animals that feed off the trash piles covered with sewage are more likely to carry diseases that will infect the human that ultimately consumes them. The constant bombardment with chemicals and toxins in the air and water is almost certainly contributing to the large numbers of aggressive cancers at young ages that I see in my clinic. 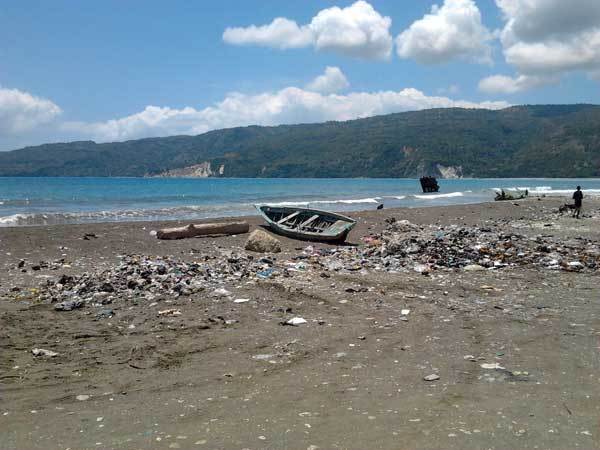 Why is Port-au-Prince so filthy? Poverty and the lack of any real trash collection is the most obvious reason, but other poor countries are able to maintain streets that don’t resemble garbage dumps on miniscule budgets. Maybe it’s not that dirty compared to places that I’ve never been to, such as Mumbai or Mogadishu, and we should be grateful that there is no river filled with thousands of pig carcasses like in Shanghai. Living in abject poverty could certainly create a communal sense of apathy to the refuse, or maybe the gargantuan size of the problem might make it seem insurmountable and therefore futile to fight. Perhaps the climate and topography contribute to the problem. In a mountainous city with tropical rains, refuse is more likely to remain on top of the concrete until the water washes it down the hills and collects in gutters, potholes and drainage ditches. Ultimately, all waste finds its way to the ravines and river beds that drain the city, leaving cesspools of sewage commingling with non-biodegradable trash.

The “broken window theory,” as applied to urban revitalization, might mean that Haiti has to clean up Port-au-Prince aesthetically first before they can make real progress on crime and, ultimately, poverty. There is no question that the health of the population would drastically improve if sanitation was addressed even on a basic level. The only question, as always in Haiti, is where to start.