The plane landed an hour and half late, but President Francois Hollande of France descended the staircase with the pomp and grace befitting a head of state. He was greeted with a red carpet and the Haitian National Band, which played the national anthems of both countries, customary at state visits. With that, the first official visit to Haiti by a president of France commenced.

I witnessed the events of Tuesday, May 12, unfold while I sat in an ambulance as part of the emergency medical team for President Hollande. Given the tumultuous history between the two countries, how would Haiti welcome the president of France?

The politics and history of France and Haiti are inextricably linked. Haiti would not be the same country without the brutal importation of West African slaves to Saint-Domingue by the French in the late 18th century. Once the colony that produced the most wealth for France, Haiti has known externally exacerbated suffering and privation ever since the slaves had the gall to expel their masters.

In 1804, after 10 years of war, Haiti declared its independence from France, signaling the first successful slave rebellion in the world history. In 1825, King Charles X of France demanded that Haiti pay 150 million francs (roughly $17 billion in 2015 dollars) for the loss of its colony. The Haitian ruler at the time agreed in exchange for diplomatic recognition of independence, hoping to increase trade and prestige for the new country. Instead, the debt saddled Haiti with interest and payments that crushed its economy and forced it to constantly borrow to service the indemnity, until it was finally paid off after World War II.

Many have called for France to repay some or all of that indemnity back to Haiti, since many of Haiti’s present financial difficulties can be traced directly to it. French President Nicolas Sarkozy visited Haiti in 2010, but amid the struggles of post-earthquake Haiti, talk of reparations was muted. 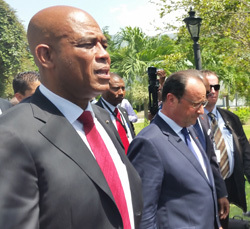 This time, President Hollande received questions on reparations before even arriving. In the French island territory of Guadaloupe, he stated that France owes Haiti a debt, but his aides quickly backpedaled and clarified that France owes Haiti a “moral debt.” The Haitian public followed the saga on local radio, wondering whether financial reparations might be possible. If one country can pay off a falsely imposed debt for 140 years, the reasoning goes, certainly the debtor country has the right to ask for some of that money back only 70 years later? Some still live who contributed to those payments, as do some of those who benefited from the ill-gotten gains.

As we streaked downtown in the motorcade, the streets of Port-au-Prince were all but shut down. Haitian President Martelly is under fire for a failure to convene legislative elections that ultimately forced the dissolution of Congress. His political fortunes, and broad disapproval of Hollande’s visit, meant protests and possible violence. Champ de Mars, the city’s main plaza, was ringed by police and the Haitian Secret Service. Hundreds of protesters stood outside the barricades, although more probably would have come if the streets weren’t closed.

Shouts from the crowd — those fit to print:

Where is the bag [of money]? You don’t have a bag? Get out of here!

Both presidents gave speeches at the base of the statue of Toussaint Louverture, a former slave and French citizen who led the initial revolt and died in a French prison before independence. Trying not to ruffle feathers, organizers held the ceremony under his statue, rather than another honoring Haitian General Jacques Dessalines, who presided over the military victories that heralded Haitian independence. The speeches, which mentioned neither debt nor reparation, were not as notable as the tense ambiance of Champ de Mars.

The delegation then crossed the street to the site of the palace destroyed in the earthquake and met in the temporary buildings that now house official functions. Apparently, the proposed trade agreements did not pass muster with all Haitian officials, and they were not signed. A few gunshots rang out on the street outside the palace wall, a random act of protest. Both presidents emerged from the meeting noticeably flustered and worn down by the unsuccessful process.

At the press conference held immediately after, the two men again spoke of progress and partnership, education and investment. Hollande deftly sidestepped the question of indemnity by stating, “We can’t change history, but we can change the future,” before launching into a description of an aid package of 50 million euros that included training for teachers and educational improvements.

From there the caravan sped five blocks to Port-au-Prince General Hospital, operating but partially destroyed by the earthquake. France and the United States each pledged $25 million toward the construction of a new building in 2010. Five years later, President Hollande visited an empty field with some heavy machinery and construction workers on it, but nothing resembling a new hospital.

Then the caravan tore up the hill to a reception at a fancy hotel. Hundreds of French citizens were invited to welcome their president with music, dancing and filet mignon. Nobody mentioned reparations. Martelly, a professional singer prior to his election in 2011, serenaded his counterpart with a classic French song from the 1950s. He exaggerated a French accent as an homage to the original singer, and Hollande joined in to sing a few words. At the conclusion, Martelly whispered something into Hollande’s ear, and the caravan was off again.

Martelly made an unscheduled rush-hour stop at Place Boyer, where the heads of state walked through a park newly renovated with a basketball court and playground equipment, and their security details struggled to establish a perimeter. People and cars were everywhere. A crowd formed, but it fortunately cheered instead of jeered.

When traffic cleared, the caravan returned to the airport. Anthems played, pleasant words were exchanged and Hollande’s plane lifted off into the sunset.