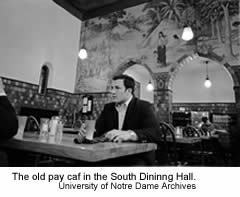 A guy came in my office the other day. It was a football Friday afternoon, and he wanted to show his son the room in Grace Hall where he had lived in the 1970s. I was happy to accommodate the walk down memory lane.

I remembered going into Farley Hall, revisiting the familiar corridors and niches. Even spinning down the stairwell from fourth floor to first brought back a flood of memories—hurrying to class, catching up with the guys for dinner, running to play football on the fields by the library. The sound of the footfalls, the handrails and worn stone steps—the very details and smells of the place—carried me across time to those faraway years.

Freshman year we lived in a quad just above the Farley chapel and could step out a window onto the chapel’s roof. One football Saturday morning we loaded a few metal trash cans with beer and ice and set them on the roof for some post-game partying. I still remember how cold the beer got and how fun it was hailing, cheering and toasting the people passing by.

Later that night we played a mean air-guitar rendition of “Wild Thing” on a wooden bandstand outside Zahm Hall. We must’ve fallen asleep beside Saint Mary’s Lake because we woke there in the middle of a cold and starry night—immersed in ducks and geese. We got up and stumbled home, arms wrapped around shoulders, friends for life.

I don’t think I’ve walked past Farley in all the intervening years without recalling that night with a smile on my face. Corners all over campus are populated with such memories for all of us. Spirits inhabit every building—the bricks and mortar animated not only by the current commotion but also by the apparitions dwelling there. When the building goes down, the ghosts disperse, too, carried away in the heads of those who remember.

I was thinking about this stuff because I stopped by the University Club on the autumn day its contents went up for auction—not the priceless stein collection but the tables and chairs, the glassware and stepladders and Christmas decorations. It felt strange and sad and empty, and I didn’t hang around long.

I thought of the University Club back when it felt like a real faculty club, with professors and students visiting over lunch. The law school had its own table. There was the Algonquin group, Emil T. Hofman with a pre-med student, Otto Bird and Bob Leader paired up, and Tom Werge with an aspiring writer. I used to go to lunch there regularly with Father Bob Griffin, CSC. At least once a month we’d trundle across campus, stop at the post office for him to pick up his mail, then join the U Club camaraderie for food and talk about writing and God and our theories of life, religion and campus affairs. The University Club is gone now, as is that post office. The bus shelter at the Main Circle is gone, too.

These specters got me thinking of the Pay Caf—the Oak Room, that dark-wooded public cafeteria in the South Dining Hall, with its lavish and quirky murals of rubber plantations, Julius Nieuwland and chemistry labs. To me, it was one of a handful of places that just felt like Notre Dame, with its old-school ambience and plain fare but interestingly diverse clientele. To be there, at lunch or having coffee with a colleague, professor or student, was to enter the flowing stream of University life, its richly singular moments and warm, abiding history.

The Old Fieldhouse welcomed me with a similar embrace. I was in high school in 1967 when I visited my sister at Saint Mary’s College. Her boyfriend took me to the Rock to play basketball, then to the ramshackle fieldhouse, built in 1898, where the Fighting Irish still played basketball—back-to-back games in those days, the freshman team then the varsity. We had to go early, he said, to get a good seat for the freshman game because everyone came to see freshman phenom Austin Carr.

The building was shabby even then, and the hardwood court was laid on the dirt floor. Rickety bleachers lined the court, pressing in on the game and the benches and the players. I don’t remember much about the game. I just remember the feel of the place, the dusty, raggedy, raucous, very male environment, and my joyous, inebriated initiation into that culture.

That decrepit airplane-hangar of a building also hosted commencement exercises, visiting speakers, pep rallies (football team and coaches enthroned on the balcony above the delirious student body), track events, batting practice and the Bengal Bouts. In its final days it housed art studios, kilns and galleries before the grand old building was finally knocked off its feet in 1983. I miss it.

I miss those places on campus that were a little timeworn, a little threadbare, whose wraith-like existence evoked an earlier, simpler, less upscale time—like that squat brick band annex adjacent to Washington Hall. It had been Father Bernard H.B. Lange’s gymnasium back in the day. I knew it as a place where student musicians would practice their art, the sounds of trumpet or drums floating out the windows.

In the 1800s, Holy Cross Hall was built on the hill overlooking Saint Mary’s Lake as a seminary for the Congregation of Holy Cross. It was converted to a residence hall in 1968 and became the slowly deteriorating home of the Holy Cross Hogs. Its isolation and creakiness, its faulty wiring, failing hot water, co-habitating creatures and rascally reputation gave it an “animal house” atmosphere that its occupants savored until its demolition in 1990.

I have no interior or lasting memories of Holy Cross Hall. That spot is a windy vacant lot today. But others do. And all across campus new buildings have typically gone up where old ones have been razed. The faithful departed exist now only in old photographs and in the memories of people who knew them. Vetville. The old bookstore (with Gilbert’s inside and basketball courts outside). Senior Bar. The laundry. Navy Drill Hall. The Minims’ play hall. That’s just the way it is. It’s progress, growth, the advance of an institution whose expansion is stunning to any who turn away for a few years.

There’s good reason to look back and remember, though. Not long ago I ran across a map hand drawn by Brother Donovan, CSC, in 1902. It plots the campus core as well as the farm buildings and the livestock barns and fields for rye and wheat, clover and corn, oats and potatoes. A 30-acre field produced 300 bushels of potatoes before Donovan’s experiments in the 1890s and 8,200 bushels after his fertilizing. That field was where the old post office and University Club used to be, now the construction site for an engineering building. Brother Donovan’s potato field. Imagine.