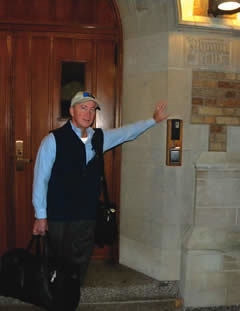 It is 10 p.m. on a Tuesday night, and the six resident assistants of Alumni Hall are sitting in a third-floor apartment in their dorm, trying politely to convince the governor of Indiana to go downstairs with them and try a slice of student-made Dawg Pizza.

Someone explains: the men of Alumni Hall call themselves the Dawgs, and they make their own pizza right in the dorm. It’s not bad, they say, although the quality is hit-or-miss. There is some debate. Maybe Reckers, the University’s 24-hour eatery nearby, would be a better choice.

Since the Republican’s days on the campaign trail in 2003, Daniels has stayed in family homes instead of hotels. It wasn’t a calculated political move, he says, he just wanted to operate cheaply and save some of the state’s money. He doesn’t necessarily stay in the homes of his supporters, either. Often he stays with Hoosiers he’s never met. He only stays at a motel when he arrives too late to make a house call. It would just be impolite, he says.

Daniels is visiting Notre Dame to give a talk on government and entrepreneurship at the Mendoza College of Business. In his lecture, Daniels — a past CEO of pharmaceutical giant Eli Lilly and a veteran of the U.S. Office of Management and Budget under President George W. Bush — discusses the policies he has pursued to encourage business growth in Indiana. Afterward he has a formal reception at Notre Dame’s Innovation Park. Tomorrow, he will visit Our Lady of Hungary, a Catholic school in South Bend that receives funding through the state’s school voucher program.

So that’s why the governor of Indiana is sitting in a third-floor apartment in Alumni Hall, flanked by six RAs, working his way through a bag of cheddar-flavored Sun Chips and a Coke.

Father Bill Lies, CSC, normally lives here, the guys say, but he’s away this semester. The apartment, frugal but still homey and clean, is disconnected from the standard Alumni Hall chatter: bursts of laughter from a video game tournament, talk of tests and papers, post-workout swagger. The governor of Indiana is not just crashing on some sophomore’s couch.

In his lecture at Mendoza, Daniels speaks energetically, with a soft Midwestern pitch accenting his plain talk. He wears a navy fleece vest over gray slacks and a white button-down. He toys absentmindedly with the top of his water bottle as he speaks, but he is clearly comfortable with an audience.

This being Mendoza, Daniels isn’t afraid to throw in some shop talk: deleveraged bets, gross domestic product. He uses a few political buzzwords. His administration is “aligning around an objective,” creating a “spirit of entrepreneurship.”

But with a few quaint clichés, he smoothly shifts gears to the Indiana everyman: Indiana is “open for business,” but our national government is “flat busted.” His “new government organization wasn’t a ‘synergistic enterprise,’” he says. “We just built a better mousetrap.”

Maybe Mitch Daniels, with his blue vest and his figures of speech, should be a basketball coach. He is a Hoosier, after all. He’s got the fast pace, the energy, the natural understanding. He explains government-business relations as an offensive play, drawn up like a greaseboard give-and-go during a pressurized second-half timeout.

Perhaps it’s not so surprising, then, that on the third floor of Alumni the talk inevitably falls to sports. Here the governor really shines, even though everyone gets a few shots at his hometown Colts. Daniels thinks the Colts need some stronger supporting players. The Alumni guys, sensing that the governor is comfortable on the common ground of sports, join in. Doug Farmer, the editor-in-chief of The Observer, adds a few thoughts about Brian Kelly and the Fighting Irish. Dan Collins, former leprechaun and current assistant rector, sneaks in some inside information of his own. The language of sports is probably the primary language of the men’s halls at Notre Dame.

The students regard Daniels with a mixture of natural respect and good-natured humor. They understand Mitch the politician. They want to see Coach Mitch, and he often obliges, trading jokes and poking fun the same way any Alumni guy would.

We talk cities and states, a ritual familiar to ND students. In their first days as freshmen, Domers eagerly try to define themselves with a state identity, to put themselves in context.

Doug Farmer is from Wisconsin. Bobby Neihaus makes a joke about cheese. Everybody laughs.

Tony Schlehuber is from Indiana, so someone makes a crack about skiing, or the lack thereof. Are there even hills in Indiana? There are, says Daniels. He then explains Ice Age glacial action in Indiana, and Indiana’s rich topsoil, and how there are a few ski areas down south but it’s too temperate down there for much snow, and they’re probably not the most profitable businesses anyway. Tony agrees while the rest nod in surprised bemusement. The governor might act the everyman, but this man knows his state from the ground up. Literally.

They give in to their curiosity. Have you met anyone really interesting, governor?

He pauses. “To be honest, guys, I’m not really sure who you’d find interesting.” Everyone laughs. How about other governors?

Do you know Chris Christie? “Yeah, and when we have meetings together it turns into a comedy show. He’s very quick with his jokes.”

And Joe Lieberman? “Yes, and he is a really good guy, even if he and I don’t agree on politics.”

We pause. Do you know Arnold Schwarzenegger? Everyone laughs again.

“Yes,” says Daniels, “but I’m hesitant to say anything about him, since it’s a whole different world out west. Although I will say this: He is definitely big.”

A few of the students stand and shake the governor’s hand. We’re sorry, they say sheepishly, but we have to go play a broomball game. “Broomball?” asks the governor. “Yeah,” says Matt Sushinsky, who coaches. “It’s kind of like hockey, but you play it with brooms.” The governor nods. James Hesburgh chimes in: “And you’re wearing sneakers. On ice.” Everyone laughs again.

Someone asks about Indiana’s new school voucher program. The governor explains the technicalities, and suddenly the thinking caps are on. The students respond with questions and ask for details. Danny Barrera, whose parents work in education, compares Indiana’s program to Florida’s.

The time comes to depart. The governor, finally some tiredness in his eyes, thanks us for the talk. It’s nearly 11. Mitch Daniels has a handshake and a joke for everyone. Someone makes a final, last-minute pitch for Dawg Pizza, and we all laugh once more.

Photo from Office of the Governor.