In search of savings and lower carbon emissions, Notre Dame is employing a new heating and cooling system: planet Earth.

Three geothermal fields have been installed across campus in the past year, capable of pushing a total of 3,000 tons of water 300 feet down into the earth’s crust. Down there, the temperature maintains a constant range of 50 to 55 degrees, whatever the weather at the surface.

That consistency allows the closed-loop piping system, which returns the liquid to the surface and distributes it through an energy center, to help heat buildings in the winter and cool them in the summer using less coal and gas energy. The water in underground pipes stays closer to the temperature needed throughout the year, reducing the demand for fossil-fuel heating and cooling sources, and limiting the harmful emissions they produce. 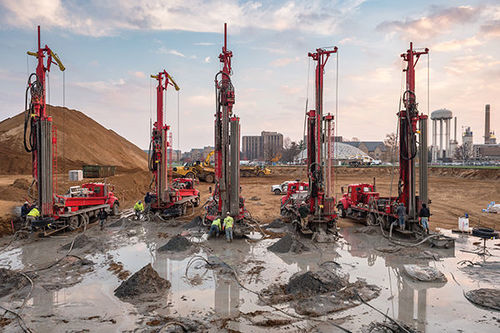 Geothermal fields on campus will help save energy and money. Photo by Barbara Johnston.

That’s good for the environment and also for the Irish pot of gold. Because of the reduction in heating and cooling expenses, the University expects these geothermal systems, installed at a cost of about $40 million, to pay for themselves within 15 years.

“If I can demonstrate a payback and reduce my carbon footprint, it’s a win-win opportunity,” says Paul Kempf, Notre Dame’s senior director of utilities and maintenance. “And then over time if we’re saving money, then the University is in a better position to take those savings and roll them back in and keep investing in sustainability.”

Only one of the three geothermal fields is currently operational. The others are expected to begin running over the next two years.

The active field is located under the grassy quad east of the Hesburgh Library and south of the new McCourtney science and engineering research building. The system provides 150 tons of heating and cooling capacity specifically for the nearby Ricci Band Building and the ROTC’s Pasquerilla Center.

A field under the parking lots south of Notre Dame Stadium will serve that part of campus, as well as the centralized chilled water system, with its 1,000 tons of capacity. The third field, installed under the new Ricci Family Fields near Stepan Center, will be the largest, with a capacity of 1,350 tons and the flexibility to serve campuswide heating and cooling systems.

When the three geothermal fields are all operational, they’re expected to reduce Notre Dame’s carbon-dioxide emissions by 11,803 tons, an 8 percent reduction from 2016. More locations around campus, including White Field — an engineering facility surrounded by football parking lots — and the Burke Golf Course are under consideration as future geothermal sites.

These efforts are part of a larger campus emphasis on reducing emissions and increasing the use of renewable energy sources. Citing inspiration from Pope Francis’ 2015 encyclical Laudato Si’: On Care for Our Common Home, Notre Dame President Rev. John I. Jenkins, CSC, ’76, ’78M.A. has pledged that the University would eliminate coal use by 2020 and cut its carbon footprint in half by 2030.

Kempf says Notre Dame has achieved a 35 percent reduction already. But that was the easy part.

“Our approach,” he says, “has been to get the low-hanging fruit first and find where we could save the most dollars with the shortest payback.”

That has meant exploring multiple methods of energy efficiency.

Recently, 432 solar modules were installed on University-owned land near the South Bend airport. The ground-mounted system, which spans about six acres, will produce an estimated 194,000-kilowatt hours of energy per year for the Kenmore Warehouse, a University storage facility. Smaller solar arrays already have been operating on the roofs of Stinson-Remick and Fitzpatrick halls on campus.

And by early 2019, a hydroelectric facility that Notre Dame is developing on the St. Joseph River dam in downtown South Bend will support campus power needs.

The initiatives and their expected impact remain modest, with the intention of positioning the University to make larger, long-term gains in whatever direction the best energy-saving innovations evolve.

Basic investment advice, Kempf says, is to “diversify your portfolio, because you just don’t know what’s going to happen.”

In geothermal, solar and hydroelectric power, Notre Dame is strategically spreading its financial commitment with the goal of reaping a significant environmental reward.

Rasmus Schmidt Jorgensen is a student at the Danish School of Media and Journalism who is studying at Notre Dame; email rschjorgensen@gmail.com.