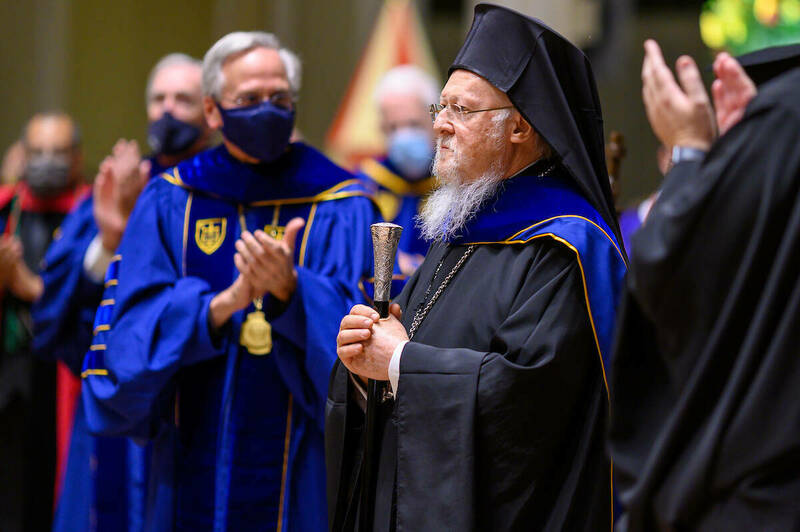 As the first-among-equals spiritual leader of the world’s 300 million Orthodox Christians, His All-Holiness Bartholomew, archbishop of Constantinople-New Rome, is to St. Andrew the Apostle what Pope Francis is to St. Peter. The Ecumenical Patriarch visited campus October 28 during a two-week visit to the United States that included stops at the White House and South Bend’s St. Andrew Greek Orthodox Church. At Notre Dame, he received an honorary degree during a rare academic convocation inside the Basilica of the Sacred Heart, where he and the University’s president, Rev. John I. Jenkins, CSC, ’76, ’78M.A. (applauding at left), together venerated an icon of the Holy Family as well as sacred relics of the Twelve Apostles brought out from the church’s reliquary chapel. Known particularly for his leadership on climate change and interreligious dialogue, the “Green Patriarch” in a short address praised students for “offering the optimism that we so yearn for: the readiness to accept change and sacrifice, the capacity to overcome polarization and partisanship, the conviction to be catalysts of social and ecological justice, as well as — quite frankly — the opportunity to save democracy and our planet.”