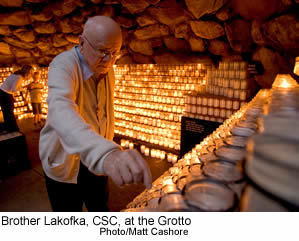 No matter what time of year, even when the campus is deserted, scores of candles can be seen blazing in the Grotto.

It’s no miracle, just the magic of mail-order and the devotion of an 86-year-old Holy Cross brother.

When people write to the University asking that a candle be lit at the Grotto for some special intention, Brother James Lakofka, CSC, graciously fulfills the requests. They total roughly 10,500 annually, he says.

Lakofka has handled the candle-lighting requests since 1977.

"People who have an illness in the family or a son here at school will write to me and ask to have the candles burning.

"It’s rather popular. I think people like it because it lets them feel as though they’re . . . here in a sense."

Lakofka also manages distribution of water from the original Grotto, in Lourdes, France. He receives a supply from Lourders and repackages the water—believed by some to have healing powers—into 1-ounce bottles that he ships all over the country to people who request it.

The water comes from a spring at the Lourdes Grotto, where Mary is said to have appeared to Saint Bernadette in 1858. The bottles come with a set of prayers to be said when using the water for healing or while suffering anxiety or pain. There is also a novena to invoke the blessing of Our Lady of Lourdes.