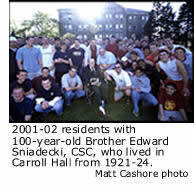 They Call Themselves: Vermin

Named for: Charles Carroll of Maryland, the only Catholic signer of the Declaration of Independence and a cousin of John Carroll, the first Catholic bishop in the United States. The building was originally known as Dujarie Institute or Dujarie Hall after Jacques Dujarie, founder of the Holy Cross brotherhood. It served primarily as a scholasticate, a kind of seminary, for the brothers until 1966, when the University bought the building and the brothers moved into new quarters across the highway at Holy Cross College. This is actually the second Carroll Hall, but the original wasn’t even a building. It consisted of three floors at the west end of the Main Building that housed about 350 high school students hospital-ward-style. The high school wing passed into history in 1946 when the space was converted to offices.

Distinguishing features: Carroll is the smallest residence hall but has some of the largest rooms. Its location overlooking the west shore of Saint Mary’s Lake provides great views of the Dome and Basilica, but because of its remoteness some students jokingly consider Carroll to be “off-campus housing” or, in winter, “Siberia.”

History made there:: This is more like potential history. The most famous of Holy Cross brothers, Blessed Brother Andre Bessette, CSC, stayed briefly in Dujarie twice, in 1920 and 1927. Brother Andre died in 1937 and has already been beatified. If he’s canonized, his visits would represent the only time a future saint stayed at Notre Dame.

They lived there as students: Brother Edward Sniatecki, CSC, ‘25, who just turned 100, lived and studied in Dujarie from 1921-24. He now resides across the street in the brothers’ nursing home, Dujarie House. More recent residents include Class of 2002 valedictorian Timothy Dolezal and current Irish starting quarterback Carlyle Holiday.

Lore: According to legend, Carroll men owe their Vermin nickname to rodents having taken possession of the dorm between the departure of the brothers in 1966 and the arrival of Notre Dame undergrads the following year. Carroll was home to graduate students from 1970 until 1977, after which it returned to being an undergraduate dorm. Whether rodents ever completely ruled the roost, they’ve long been attracted to the building, especially squirrels in winter.

Ttaditions: In September 2000 in anticipation of a home football game against No. 1 Nebraska, Carroll residents constructed an immense “Go Irish” banner out of 72 bed sheets stapled together. The banner, which covered nearly the entire lake-facing side of the building, is now raised before every home football game. Carroll residents used to take advantage of their hall’s remote locale and gothic architecture at Halloween by turning it into a haunted house. In 1997, however, female visitors complained about a portion of the house in which hands reached out from the darkness and grabbed them. The gropers earned themselves a date with Student Affairs, and the tradition abruptly ended. Two events have replaced the haunted house: A Carroll Christmas and the Fusic Festival. The first involves the lighting of a 30-foot tree on the dorm’s front lawn. The Fusic Festival, “a fusion of food and music,” features performances by campus bands while students enjoy food donated by local chains. All proceeds go to charity.