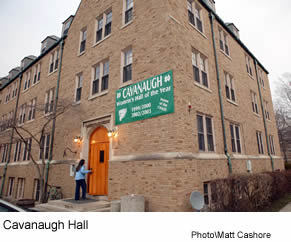 They Call Themselves: the Chaos

Named for: Father John William Cavanaugh, CSC, president from 1905-19. An English professor from Ohio, he was known for his ability to speak and write, and his eloquent speeches and sermons were often printed as literature. Cavanaugh rubbed elbows with politicians and authors he invited to campus, earning him the title "Notre Dame’s Ambassador." Rumor has it “Cavvy” knew the name of every person on campus. He was strict in running the University, but his wit and personal charm made him well-liked. He opened the Lemonnier Library (present-day Bond Hall, School of Architecture), introduced the equivalent of the current ROTC, began the Glee Club and hired Knute Rockne. He also owned Notre Dame’s first automobile, a Cadillac he received as a gift.

Distinguishing Features: Cavanaugh was the first residence hall built on North Quad and is the only building there with no door actually on the quad. Apparently the University built it with no intention of expanding campus north or east of the building. It was designed by Maginnis and Walsh of Boston, the same architects of the Law School and Alumni and Dillon halls. Cavanaugh’s collegiate Gothic style blends with the architecture of the South Quad. Its steep slate roofs and gables would become a North Quad trademark. Maginnis and Walsh designed Cavanaugh’s neighbor to the north, Zahm Hall, built a year later, as a duplicate of Cavanaugh.

History Made There: Cavanaugh, Alumni, Dillon, Zahm and Breen-Phillips all hosted naval officers in training during World War II. Cavanaugh was among the residence halls converted to female housing to accommodate the increasing female enrollment after the University began admitting women undergrads in 1972. Cavanaugh residents were known as Crusaders until the hall switched genders in 1994 and became the Cavaliers before switching to Chaos more recently.

Lore: Before co-education and carpeted hallways, a group of residents supposedly began rolling a bowling ball down the hallways late at night to annoy their strict rector, who could never catch the culprits. The taunting escalated when they began leaving messages reading, “The ball rolls tonight” and later, more specifically, “The ball rolls at midnight.” Finally a note specified when and where the prank would take place. Just before the appointed hour, however, as they heard the priest climbing the stairs, the mischief-makers set the ball in motion and then disappeared into their rooms. The frustrated rector found the ball, picked it up, and immediately dropped it. It was burning hot. The pranksters had heated it in the base of a popcorn popper. During the 1962-63 academic year, residents of Farley invaded Cavanaugh through a steam tunnel. The Crusaders attempted to repel them using fire hoses in the stairwells. Unfortunately, many of the hoses had deteriorated from age and burst during the battle. Later that decade residents sprayed hoses out the windows facing Zahm, B-P and Farley. When campus police arrived, students surrounded the chief. The stunt had been a trap; they wanted the fire chief’s hat. The rector at the time, Father Matthew “Black Matt” Miceli, CSC, ‘47, shrewdly grabbed his camera and raced outside. When students saw the camera’s flash, they scattered. They didn’t know there was no film in it. Residents were not above terrorizing Miceli, who still lives on campus, by occasionally lighting an M-80 firecracker and lowering it on a fishing line to explode just outside his window.