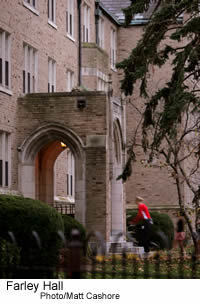 They Call Themselves: Farley’s Finest

Named For: Father John “Pop” Farley, CSC, who attended Notre Dame at the turn of the century and later returned to serve as rector of Corby, Walsh and Sorin halls. Students affectionately called him “Pop” because of his habit of referring to residents as “my boys.” It was said that Farley never missed an event in which one of his hall’s residents participated. The priest died in 1939.

Distinguishing Features: Farley was built immediately after World War II to help meet the needs of Notre Dame’s growing student population. Farley the dog, a Pekingese, can often be seen sitting outside on the quad providing entertainment and comfort for all who stop to pet her. This pooch, a former stray, has lived with the hall’s rector, Sister Carrine Etheridge, IHM, for the past four years. She sports jerseys and winter sweaters on football game days.

History Made There: Farley, along with its neighbor Breen-Phillips, was one of the first halls on North to house women after Notre Dame made the switch to coeducation in the early 1970s. Father Hesburgh, CSC, ‘39 was an early rector of Farley, and his desk, acquired from military surplus, is still in Sister Carrine’s office. In the late 1960s, Farley was the test-case for the “stay hall” system, in which undergraduates remain in the same building all four years. After the system’s success in Farley, the University took it campuswide.

Lore: One night in the 1970s Sister Jean received a phone call warning her of a group of men heading toward Farley with plans to streak through the hall. Intent on keeping them outside, she stood guard at the south entrance. When the men reached Farley, she stopped them at the door, yelling, "You’re not coming in here like that!" The embarrassed and naked young men hid from the nun behind every bush, bike and tree they could find until they admitted defeat and moved on to Lyons. The fondly remembered “Farley Motel” was set up in the 1970s as a place where the girlfriends of guys living in the male dorms could stay when they visited for the weekend. Located in the hall’s cellar, the space could accommodate 36 people at $1 per night. Every so often there was a bit of confusion though, and Sister Jean once received a phone call from an executive at Ford Motor Company looking to make a reservation for the new campus motel facility.

Traditions: After the advent of coeducation, the men of Farley asked the dorm to carry on the traditions of their running club, the Farley Striders. The club was famous for its route that led them to Saint Mary’s and for sending its club T-shirt to the Pope, Johnny Carson, the emperor of Japan and the president of the United States. Every January the women of Farley host Pop Farley Week, which includes such activities as salsa dancing, skit night, hall decoration and a winter dance. In 2004, Farley created a “Men of ND” calendar, which features fully clothed male students who are not only good looking but actively involved in campus life. The first calendar raised more than $4,000 for Hannah’s House, a safehouse in South Bend for pregnant women.