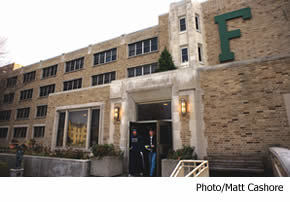 They call themselves: the Green Wave but also refer to themselves as Fishermen. Others call the hall Fishy Fisher for its location next to the South Dining Hall’s trash receptacle. First-floor residents sometimes refer to Ellie, the 6-year-old basset hound of Rector Bob Moss, CSC, ‘68M.A., ’72M.A.. as “Smellie.”

Named for: Frederick Fisher, one of the founders, in 1908, of Fisher Body Company, now part of General Motors. The $750,000 it took to build the hall was donated in 1949 by Fisher’s wife, Sally, in memory of Fred, who had died in 1941. He had been a member of the University’s Board of Lay Trustees for more than 20 years. Fred and Sally had no children of their own but were fond of Notre Dame. When Sally donated the money for the hall she also gave $250,000 to create a loan fund for students. Two years later she donated more than a million dollars worth of rare paintings and tapestries to the Snite Museum. By the time the hall was dedicated in the fall of 1952, she had also passed away.

Distinguishing features: The large green letter F over the main entrance first appeared in the late ‘80s and was built by students. The lower case letter was stolen in 1991 by residents of neighboring Pangborn, then a men’s dorm. The thieves broke the letter and scattered the pieces over the golf course. Three Fisher residents decided to build a new F, this time making it a capital letter. The result was so heavy it took 10 men to lift into place and was secured with chains. Guards stood watch over it the first few nights. The next year Pangborn became a women’s dorm and the rivalry ended. Four to five years ago the rotting letter fell onto the roof. Administrators did not want to replace it but residents managed to convince them. The new F is made of plastic. Fisher was only the second dorm on campus to have a social lounge. The hall was built to be a law/graduate dorm and thus had mostly single rooms. It remained that way until the late ‘60s, when it was remodeled to create doubles. Fisher still has approximately 40 singles, among the most of any dorm. The four-story structure was originally designed to have seven floors, but the University ran out of money.

History Made There: A memorial fund honors Chad Sharon, a Fisher resident who disappeared December 12, 2002, after leaving a party near downtown. Two months later his body was discovered in the Saint Joseph River underneath a bridge on Angela Boulevard. The death was ruled an accident. Freshmen are now told about Sharon as a reminder never to leave a friend behind at a party to walk back to campus alone.

Lore: A friendly rivalry with Carroll Hall resulted in the prank of sinking Carroll’s boat for the Fisher Regatta (see “Traditions”) in 2003. Carroll’s boat had won the four previous races. Fishermen good-naturedly retrieved the boat from the bottom of the lake the night before and helped get it ready for the race, which Carroll ultimately won. Joe Montana returns every year for at least one football game and has his picture taken with the lucky Fishermen occupying his former room.

Traditions: The Fisher Regatta, begun in 1987, is a huge homemade-boat race across Saint Mary’s Lake. All dorms compete in the single-elimination tournament with separate divisions for men and women. The week leading up to the Regatta is known as Fred and Sally Week. Every night features a different event, including a guest speaker, pie-eating and arm-wrestling contests, “The Roommate Game” (like the Newlywed Game), and Mock Awards named after infamous past Fisher residents. The Fisher Roofsit, begun in 2002 to commemorate the 50th anniversary of the hall, features Fishermen and representatives of other halls sitting on the roof for 50 hours straight to raise money for charitable causes. The original Roofsit benefitted a law student whose young daughter had cancer. Currently half the money from the roofsit goes to the Chad Sharon Memorial Fund and the rest to a separate charity. This year’s other half went to the American Cancer Society in honor of Tim Solic, a Fisher alum who was battling cancer.