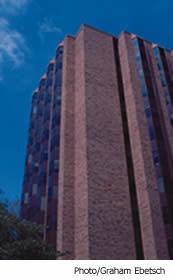 They Called Themselves: The Gamecocks or the Cocks

Named For: Thomas U. Flanner III, a Chicago lawyer who died in 1965, four years before the dorm’s opening. The name was chosen by Flanner’s mother, Helen Kellogg, who donated the money for the building and who also endowed Notre Dame’s Kellogg Institute for International Studies.

Distinguishing Features: Originally, five high-rises were to be built in a semicircle north of the Hesburgh Library, and a modern, circular chapel was to sit in the center of that semicircle. Flanner and neighboring Grace Hall were the only two of those proposed buildings to be constructed. Flanner was one of the first dorms to offer such amenities as kitchenettes on every floor, air conditioning, an extensive weight room and in-dorm food sales. Today, floors one and two of Flanner are home to the Career Center, established in 1998 to replace the old Career and Placement Services office in the basement of the library. Though Flanner is now an office building, a chapel named after Blessed Brother Andre Bessette, CSC, remains on the second floor.

History Made There: In the mid-1990s, the University faced a shortage of office space. When renovations began on the interior of Main Building in 1996, administrative offices temporarily were moved from that building to Grace, and some of the offices remained there permanently. Former Grace residents moved to the newly constructed Keough and O’Neill Halls on the southwest side of campus. But shortages in academic office space persisted—one-fifth of the library’s offices were being used for non-library purposes—so the University decided to convert Flanner to an academic office building by autumn 1997. To maintain a gender balance throughout campus, Flanner residents moved into Siegfried and Knott Halls, formerly women’s dorms, and the women of Siegfried and Knott moved to McGlinn and Welsh Family Halls, filling out the new West Quad.

Lore: In the 1970s, Flanner and Grace engaged in an annual war the weekend before spring finals. Residents launched bottle rockets, blasted stereos and hurled epithets at the opposing dorm. Spectators gathered on blankets south of the dorms to watch. One year, a Flanner resident with a megaphone did a perfect impersonation of Father Hesburgh, calling for the students to cease and desist. Credulous residents briefly suspended the battle, but it resumed when the impersonator concluded his address with a declaration of “Grace sucks.” Given the difficulty in policing an 11-story dormitory, Flanner had a reputation for rowdiness that continued into the mid-1990s. Residents were known to throw large parties and to play practical jokes on one another. One such prank involved hog-tying a resident with duct tape and throwing him into an elevator until someone came to his aid.

Traditions: Flanner held an annual Christmas formal the weekend before winter finals. Each floor was decorated with a different theme, and the dance, which could attract more than 1,000 guests, was held in the first floor study lounge. That lounge, referred to as “the pit” because of its descending levels, also was the home to Sunday Mass, as the hall’s chapel was too small to accommodate all of the attendees. Today, Siegfried and Knott compete in the Flanner Cup, a series of athletic competitions to determine supremacy between the two dorms to which the last Flanner residents were relocated.