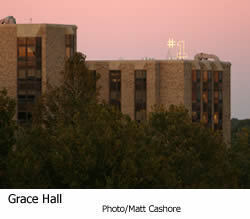 Male or Female: always male until 1996

They Called Themselves: The Grace Lightning.

Named For: Joseph P. Grace, international businessman, philanthropist, and close friend and adviser to Father John F. O’Hara, CSC, University president from 1934 to ’39. A gift from his son, J. Peter Grace, a University trustee, made possible the construction of the hall. The elder Mr. Grace advised O’Hara on the founding of Notre Dame’s College of Commerce (now the Mendoza College of Business) and received an honorary doctorate from the University in 1937.

Distinguishing Features: Since 1969, Grace has flanked the northeast side of campus as one of two 11-story high-rises. When illuminated, the 8-foot-tall “1” sign perched atop its roof distinguishes Grace from neighboring Flanner tower. The sign, originally placed outside Moreau Seminary after the 1973 championship football season, now remains lit so long as any Irish sports team is ranked No. 1. Some considered Grace and Flanner to be anomalies among Notre Dame residence halls because of their huge capacity, small sections and limited social space. These features made both dorms prime candidates for change when the University faced a shortage of office space after temporarily closing the Main Building for renovation in the mid-1990s. Today Grace houses Café de Grasta and several administrative offices, including those of this magazine.

History Made There: In honor of the fifth anniversary of Grace and Flanner, a South Bend baker created a 300-pound cake replica of the towers. The cake stood 6 feet high and fed 500 people at the open-house celebration in 1974. Gracevision, a broadcasting station created in the late 1980s by the hall’s rector, Father Gerald V. Lardner ’74M.A., was maintained exclusively for Grace residents. Funded by profits from the dorm’s lucrative food sales business, the station featured broadcasts of inter- and intra-hall sports events, a social awareness film series, the Grace Hall elections and a variety show. The decision by University officials to convert Grace into an office building was met with protests from residents, but in autumn 1996 the men of Grace moved grudgingly into the newly constructed Keough and O’Neill Halls on the southwest side of campus.

Lore: With more than 500 residents spanning 20 sections, massive parties that spilled onto other floors were not uncommon. Friendly intrahall rivalry existed during the Grace Hall debates, when representatives from each section would form teams to argue a controversial issue of social relevance. An annual 24-hour charity run raised money for community projects in South Bend. Legend has it that the residents of O’Neill, still angry at having to move across campus, decided to honor their Grace heritage when it came time to choose a new mascot. They are now known as the O’Neill Angry Mob.

Traditions: The men of O’Neill begin their annual Mardi Gras dance with a parade around campus, stopping first at Grace to pay homage. In a further nod to their Grace roots, the best section football teams from Keough and O’Neill face off at the end of each interhall football season for possession of the prized Grace Cup, which is currently held by O’Neill.