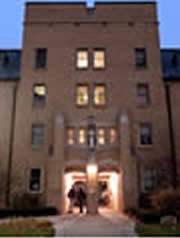 They Call Themselves: Ducks, after George Lucas’ oddball 1986 film Howard the Duck about a cigar-smoking, beer-chugging comic book character from outer space. The film fizzled at the box office but has since acquired a cult following.

Named for: Timothy E. Howard, 1862 graduate, renaissance man. Originally a professor of English literature, he entered politics after receiving his Notre Dame law degree in 1873 and was elected to the Indiana State Senate. He eventually became chief justice of the Indiana Supreme Court. He lectured on law at Notre Dame and at one time was dean of the law school. He also wrote short stories and poetry, published histories and became a tax code expert.

Distinguishing featrues: With a double-barreled archway bisecting the building, Howard acts as a conduit between the picturesque courtyard formed by Howard, Morrissey Manor and Lyons Hall to the west and such buildings as Badin and Bond Hall (architecture) to the east. A niche statue of Saint Timothy, the shy yet courageous companion of the apostle Paul, lords over the archway’s western face. Other bulbous designs decorate both sides. On the east side, a football player and squirrel represent the essence of autumn beneath the Golden Dome. On the west, an owl, representing sagacity, peers at a crying schoolboy. Howard’s room sizes range from singles to quints (five persons) with no two exactly alike. The newly refurbished chapel houses a Pieta by sculptor Jean de Marco.

History made there: Howard was the first dorm named after a lay professor, the first example of collegiate gothic architecture on campus, and the first campus building designed with an eye toward impending construction. (Morrissey and Lyons were built one year later to complete the three-sided courtyard.) Residents held impassioned protests and appealed to the administration and Student Senate when, two weeks before finals in December 1986, they received word that Howard would be converted to a women’s dorm the following fall. Lamenting the loss of a fraternity-like atmosphere and such Howard traditions as the Howard Hat and Tie Party, residents wore black or white armbands labeling themselves as the “Howard Homeless.” They also formed the Howard Liberalization Organization and blanketed Howard’s exterior walls with banners including “Walk Like An Eviction” (a play on the Bangles’ hit “Walk Like An Egyptian”) and “Rooms for Rent (girls only).”

They lived there as students: Bill Dwyre ‘66, sports editor of the Los Angeles Times, and Monsignor Robert Gabriel Angelle ’60, a senior priest in Lafayette, Louisiana. He lived in Howard from 1958 to 1959 while pursuing his master’s in chemistry at a time when the basement housed graduate-student priests.

Lore: Howard has the reputation of being “the quiet dorm,” possibly due to its relatively small size and high proportion of singles, but it wasn’t always so demure. In 1978 a fire broke out, supposedly after someone dropped a lit cigarette down the elevator shaft. The only casualties were a few singed calculus books, but it spawned an annual Fire Party featuring fire hats and fire-resistant clothing. The tradition was eventually extinguished by administrators who determined that it had become merely an excuse for excessive consumption of firewater. Howard is said to have a ghost, “Howie,” inhabiting what resident’s affectionately call the “fourth-and-a-half” floor, a closet atop a four-step staircase. A daylight examination reveals nothing more supernatural than computer cables and equipment. Howie is believed responsible for eerie happenings on the fourth floor, including doors found open that are remembered as having been shut and lights turned on that were thought to have been extinguished.

Traditions: Howard hosts an annual campuswide marshmallow roast on the first snowfall, and every fall the Ducks organize the Howard Hoedown, a country-and-western-themed dance. For the past three years, current Ducks and those who’ve moved off campus have reunited at the hall the first Sunday of the month to share Mass followed by a community dinner.