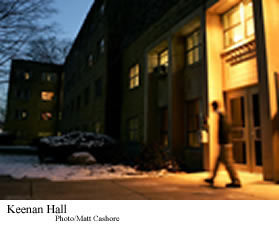 They Call Themselves: Knights

Named For: James Keenan ‘13, who underwrote construction of the hall as a memorial to his son, James, Jr., who died in 1941 just as his college years were about to begin. The Keenans were from Fort Wayne and owned and operated a chain of hotels in the Midwest.

Distinguishing Features: Keenan shares its chapel (Holy Cross), lobby and entrance portico with its attached neighbor to the north, Stanford. But Keenan men never enter through the Stanford doors and vice versa. The chapel features a 13-foot mahogany cross by sculptor Ivan Mestrovic. Another Mestrovic carving, Christ as a Young Boy Teaching, can be found in the lobby. The outer walls of the chapel feature narrow, vertical stained-glass windows with variations on the cruciform. The windows were designed by now-emeritus professor of art Robert Leader, one of the last remaining Iwo Jima veterans who witnessed the famous flag-raising. Keenan’s basement has a movie-screening room, a big-screen TV and game room, a weight room, a music room, and a student-run restaurant, Zaland. The name is derived from taking the first three letters off of Pizzaland. The establishment’s slogan is “best pizza in Zaland,” but it also serves hamburgers, chilidogs, quesadillas and chicken fingers, among other items, and sells stamps and Keenan apparel.

They Live(d) There: Matt Storin ‘64, former editor of the Boston Globe and now Notre Dame associate vice president of news and information; Michael Morrissey ’64, chairman of the board of the Kauffman Foundation; and Edward Ojdana, Jr., ’65, president of Experian Consumer Direct and creator of the online credit report. President-elect John Jenkins, CSC, ’76, ’78M.A., currently resides on the second floor.

History Made There: Keenan rests on what was once the playing field and toboggan slide for the University’s grade-school or Minim program, which lasted from 1854 until the 1930s.

Lore: Keenan and Zahm Hall are long-time bitter rivals. In the early 1990s they met in the interhall football finals. The game was a scoreless tie until a Keenan player caught a touchdown pass as time expired. Zahm accused the receiver of pushing off, but the play stood, and the Knights were champions. The Zahm rector wouldn’t speak to Keenan’s rector for some time afterward. Coach Lou Holtz was once invited to speak at the hall’s end-of-year awards banquet. Holtz was late in arriving, and a student decided to get on stage and imitate the coach. Holtz arrived mid-show and watched with amusement from the back. Brother Bonaventure Scully, CFX, rector from 1985 to 1999, used to donate all confiscated beer to the rectory of the Holy Cross Brothers.

Traditions: The Keenan Revue, begun in 1977, is one of the most popular campus events every winter even though it’s performed on the campus of Saint Mary’s College in the O’Laughlin Auditorium. The show features an all-Keenan cast and crew in skits and musical numbers. Much of the humor derives from stereotypes about other residence halls. The free tickets are always a hot item, and this year’s three shows “sold out” in 23 minutes. Every Monday night since 1987 Keenan residents have cooked dinner and eaten with residents of Dismas House, a halfway home for the formerly incarcerated. At Halloween, Keenan hosts more than 100 underprivileged children as part of a program called The Great Pumpkin. They carve pumpkins with the kids, put on a haunted house, and take them trick-or-treating in the dorms. One Sunday every December, residents gather outside for the annual Keenan Reindeer Roast, a cookout and occasion for hanging Christmas lights. Residents gather in the basement to make their own kilts to wear to the first varsity football pep rally of the year. Intrahall sports are popular in Keenan with the Hambone Trophy going to the winning section football team. Keenan no longer shares the tradition with some other male dorms of streaking, but residents enjoy making the experience less enjoyable for participants from Alumni Hall and Zahm by firing water balloons and squirt guns at them.