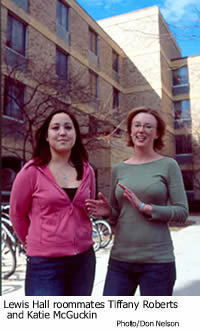 They call themselves: the Chickens, or, more commonly, the Chicks.

Named for: Frank J. Lewis, a Chicago roofing and paving materials manufacturer. Julia D. Lewis, Frank’s widow and president of the Frank J. Lewis Foundation, donated $1 million to the university in 1962, two years after her husband’s death, for the construction of a building to house nuns pursuing graduate degrees at Notre Dame.

Distinguishing features: With just under 300 residents, Lewis Hall is the largest women’s dormitory on campus. The hall’s spacious chapel was renovated in 2001, and each of the hall’s four floors contains a kitchen stocked with cookware, dishes and a cubby for each of the floor’s residents. Located between the Main Building and Saint Joseph Lake, Lewis is one of the few residence halls not located on a quad. Several years ago residents donned T-shirts reading “quadless but not godless.” A patio at the southwest corner of the building is surrounded on two sides by a cloister walk—a holdover from the hall’s days as a nuns’ residence. Along the covered walkway, now used to store bicycles, are the Stations of the Cross.

History made there: Until Lewis was built, sisters pursuing graduate degrees at Notre Dame lived in various places, including private homes and Brownson Hall, and earned their degrees after five summers of classes. The new hall allowed them to study at Notre Dame year-round and complete their programs in one-and-a-half years. Beginning in 1968 Lewis also housed laywomen pursuing graduate degrees. By the spring of 1975, just before the hall was converted to an undergraduate women’s residence, only 14 nuns lived there, compared to 130 laywomen. Still, some of the remaining nuns were furious about losing their home. The controversy was heated enough to make the Chicago Tribune.

They lived there: NBC news reporter Anne Thompson ‘79 and Anita Pampusch ’70M.A., ’72Ph.D., former president of the College of Saint Catherine, now president of the Bush Foundation in Minnesota.

Lore: Sister Annette “Netty” George, OSF, was rector of Lewis for 12 years until 2004. Calling her residents “Lewisites,” George was a frequent attendee of Lewis interhall athletic events, and she was famous for memorizing, with the help of a binder full of photos, the name of every new Lewis resident within a week of her arrival. In 2005 the 7-year-old son of a former Lewis resident died of a brain tumor. The mother’s classmates from Lewis planted a tree in front of the dorm in the child’s memory.

Traditions: Crush week occurs at the beginning of April. Festivities start Sunday with the Chicken Run, a two-mile race around campus whose proceeds benefit breast-cancer awareness. The week culminates with a Hawaiian-theme dance called the Lewis Crush. Residents sign up for a man they would like to invite anonymously. Then, as a group, Lewisites serenade each man on the list and present him with a can of Crush soda. They also run an ad in The Observer with the names of all the invited men. The Thursday night before the dance, the hall hosts a barbecue at which the men discover who their dates are, and the dance itself takes place Friday night.