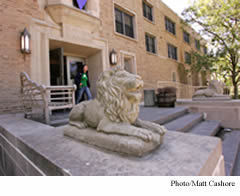 Phoxes (“Violence” when males lived there)

Thomas and John Pangborn of Hagerstown, Maryland, who underwrote construction of the hall, Notre Dame’s 15th. The Pangborns made their money manufacturing sand-blasting-type equipment. They also supported numerous educational, religious, scientific and charitable endeavors. Pope Pius XII named Thomas Pangborn a Knight of Malta. Pope John XXIII dubbed him a Knight of Saint Gregory the Great, and in 1964 Pope Paul VI awarded the philanthropist the title of papal count. He was the only American to hold the honor at the time.

The two concrete lions guarding the front entrance to Pangborn are a nod to the hall’s ornate collegiate-gothic-style neighbors on the southwest part of the South Quad, the South Dining Hall and Dillon and Alumni halls. Pangborn and three other buildings dedicated in 1955 represented a modernist step away from collegiate gothic. The building was designed by architects Holabird, Root and Burgee of Chicago, who did the similarly spare Morris Inn and Fisher Hall, Pangborn’s neighbor to the east. Pangborn’s Chapel of the Annunciation of Our Lady, renovated in 1995, features carved-wood Stations of the Cross imported from northern Italy. The stained-glass windows honor eight saints canonized the year prior to the hall’s dedication.

Pangborn and other dorms built in the 1950s were meant to be temporary housing to accommodate a spike in enrollment caused by the G.I. Bill. (A 2002 renovation actually reduced the hall’s capacity by creating larger rooms.) At the time of the hall’s dedication Pope Pius XII took the unusual step of imparting an Apostolic Blessing on the Pangborn brothers and the University. Pangborn filled the last vacant lot on the South Quad, plugging the hole between the Rockne Memorial and Fisher Hall in front of the original campus golf course. Pangborn was among the first halls to have a lay woman rector (as opposed to a nun) and that has continued to be the case 11 of the past 13 years.

At one time during Pangborn’s days as a men’s hall, a curfew existed on campus. Any men not back in their rooms by the appointed hour were locked out. Because Pangborn was on the outskirts of campus, residents of the basement rooms graciously began leaving the back door open for stragglers. On some nights the hallway would fill with curfew violators sleeping on the floor. The corridor acquired the nickname “skid row.” When the hall became a women’s dorm in 1992, the University asked for volunteers to move into the nondescript building, but none came forward. The hall was set aside for freshmen and transfer students. After a fire broke out and several windows were smashed at the first dance of the year, administrators decided it might not be such a great idea to have so high a concentration of freshmen in one building. Since then all residence halls have been multi-class-year.

The Phox Phire is an annual bonfire on Holy Cross Hill (above Saint Mary’s Lake) the weekend of a big football game. Each dorm creates a representation of the mascot of a team on the current year’s schedule. The mascots are then burned in effigy. Every year since 2000 the hall has hosted an annual trivia contest, Phoxy Phacts, that raises money for charity. Another charity event involves a three-on-three sand volleyball tournament. Every spring Pangborn holds a spirit week leading up to the Fisher Regatta, the signature event of its next-door-neighbor men’s hall. A tent is set up in the courtyard between the dorms and a dance follows the boat race. Another long-running tradition is Pangborn’s Twentieth Century Phox Dance.