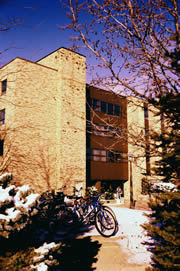 They call themselves: Pyros. In the 1980s, they called themselves the Purple Elephants to match the hall initials. The name was changed to the Pyros in an effort to claim the title of “hottest dorm on campus.”

Named for: Frank and Sylvia Pasquerilla. Their donation marked the largest ever to the University by a living person and funded the construction of Pasquerilla East, its sister dorm Pasquerilla West, and the Pasquerilla ROTC building. At the urging of then-President Father Theodore Hesburgh, CSC, a reluctant Frank Pasquerilla allowed the buildings to bear his name. Mr. Pasquerilla, who died in 1999, was a Notre Dame trustee and chairman of Crown American Realty Trust; he received an honorary doctorate of law from Notre Dame in 1982 and contributed money to construct facilities on the campuses of at least three other universities.

Distinguishing Features: P.E. is the mirror image of Pasquerilla West, as the original plans called for the two L-shaped dorms to be connected by a shared chapel. When that plan was dropped, a common space in P.E. was converted to Saint Catherine of Siena Chapel. As a nod to its relationship to P.W.—and to prevent confusion among U.S. Postal Service employees—P.E.’s four floors are numbered five through eight. Also, the two Pasquerillas were the first dorms to have air conditioning.

History Made There: Breyan Tornifolio, 26, became the youngest rector in University history when she took over for P.E. veteran Sister Mary Ann Mueninghoff, O.P., in August 2006. In 1997, P.E. resident Kelly McGann ’00 (now Bell) started Pasquerilla East Musical Company (PEMCo), Notre Dame’s first student-run theatre group. Though PEMCo is open to students from any dorm, P.E. still hosts rehearsals from November until the show’s performance in February. Over the years, PEMCo has performed such Broadway classics as Grease, Guys and Dolls and West Side Story. In 2002, PEMCo started the annual musical revue “A Night on Broadway.” After this year’s production of Ragtime and with the support of campus groups Shades of Ebony and Wabruda, PEMCo hosted its first-ever panel discussion about the cultural importance of the controversial musical.

They Lived There: Beth Ann Fennelly ’93, author of Open House, winner of the 2001 Kenyon Review Prize in Poetry for new poets; Mariel Zagunis, junior, Olympic gold medalist fencer currently on leave of absence to train for the 2008 Olympics.

Lore: For the past decade, each new P.E. freshman picks from a box one tie that belongs to a random Knott Hall freshman. Each Pyro and her “tie guy” pair up for a game of Super Sloppy Double Dare—modeled after the messy events of the old Nickelodeon show Double Dare—such as picking oranges out of oatmeal mush with one’s mouth. After a quick shower, the pair rendezvous for the Domerfest mixer—but not before upperclassmen tell the freshmen stories about former Pyros eventually tying the knot with their “tie guys.” Current P.E. residents say some of these stories were confirmed by their predecessors at the P.E. alumni 25th year reunion last fall.

Traditions: One fall Saturday every year, each section in P.E. competes in the PyrOlympics. After choosing a coherent costume theme, the sections duel each other in contests such as seeing who can come closest to touching the index finger of No. 1 Moses or singing like a banshee in LaFortune. Three years ago P.E. began Silent Night, Silent Auction, a December event that raised $1,500 for Charlie Weis’ charity Hannah and Friends. Items up for bid have included autographed footballs from quarterbacks Brady Quinn ’07 and Joe Montana ’79, whose daughter Elizabeth lives in P.E.