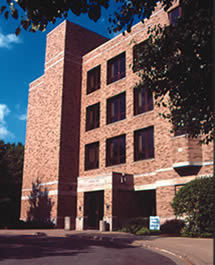 Male or Female: Female until 1997; male since

They Call Themselves: Ramblers, as a nod to the football team’s nickname during the barnstorming days of Knute Rockne. Their Viking image is partially inspired by Siegfried, a Viking warrior in Richard Wagner’s operatic movement “Ride of the Valkyries.” As a women’s dorm, they went by the Slammers.

Named For: Benefactors Robert Siegfried ’37 and Raymond H. Siegfried ’65, a former member of Notre Dame’s Board of Trustees. Ray Siegfried and his wife, Milann, later also funded the Siegfried Building in the Mendoza College of Business and established the Ray and Milann Siegfried Chair in Entrepreneurial Studies. Ray Siegfried succumbed to ALS, or Lou Gehrig’s disease, in 2005.

Distinguishing Features: Siegfried men say that they have the most full-length mirrors and the biggest closets of any male dorm, left over from its fairer days as a women’s hall. Unlike most quads, Mod Quad actually exists in two quadrangles—one to the south of Siegfried and Knott and one to the north of Pasquerilla East and Pasquerilla West.

History Made There: Siegfried and Knott are the only two dorms to convert from female to male, in order to preserve Mod Quad’s gender balance when male dorms Flanner and Grace became offices.

Lore: At an early autumn bonfire, upperclassmen present the freshmen Ramblers with Viking-inspired horned helmets. To show dorm solidarity, Ramblers wear their horns to football pep rallies and other events. Ramblers are never allowed to let an outsider don their hallmark headgear.

Traditions: Claiming the title “Hall of Champions,” rector Father John Conley’s Ramblers have always taken pride in their athletic prowess, following up on the sports success of their female counterparts. Ray Siegfried often returned to campus to see the hall’s teams participate in the interhall football championship at Notre Dame Stadium, which the hall won in autumn 2002 and 2003. In the 2002–03 school year, Siegfried also took home the baseball and basketball crowns. The Ramblers have two regular season football rivals. The Flanner Cup (also known as the ’Cock Cup, after Flanner’s old Gamecock mascot) is the culmination of a weeklong series of competitions between the Mod Quad rivals in a literal turf war for the honor to name the earth between the dorms: the Siegfried Slope or the Knott Knoll. Siegfried also plays O’Neill every year for the biggest trophy the dorms’ benefactors could find—a shiny football called the Siegfried-O’Neill Cup. Though Ray Siegfried fronted the money, Joe O’Neill said he will pay his half when his dorm takes home the cup, which they have yet to do in 11 tries. When the Ramblers aren’t playing football, they’re painting themselves for it.

Upperclassmen wake up their freshmen in the small hours of the morning of the first Irish home game, paint them green and send them howling at girls dorms until they see lights flicker on. Then the resplendent Ramblers bathe in Stonehenge—coloring the memorial’s water for the rest of the day. For Siegfried’s oldest dorm event, the Rambler Scrambler, Siegfried would host a dance as people played various miniature golf holes located throughout the dorm. The Scramble has since moved to Stepan Center and has expanded campus-wide. It generates funds for ALS research.

This past winter Siegfried started the Day of Man. One snowy February day, 120 Ramblers left the dorm wearing only T-shirts, shorts and flip-flops, scouring for campus donations to benefit the South Bend Center for the Homeless. They raised $5,400.