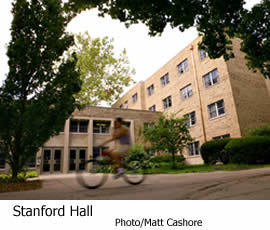 They Call Themselves: Griffins. They used to call themselves Studs. The switch was made in February 1999 to honor Father Robert Griffin, CSC, University chaplain for 30 years and a campus icon until his death in October 1999.

Named For: Grattan T. Stanford, who underwrote construction of the dorm. Stanford was an Indiana native and 1904 Notre Dame graduate. He spent three decades as general counsel for Sinclair Oil Corporation before serving as a trustee for the University.

Distinguishing Features: Stanford is an example of the late 1950s’ architecture that characterizes several dorms on campus. The dorm’s boxy shape and unadorned exterior inspired residents to nickname it “the cinderblock palace of love.” Stanford is connected at the front entrance and lobby with Keenan Hall, but Stanford residents enter only through the doors under their signage and vice versa. The two men’s dorms also share Holy Cross Chapel, which features a 13-foot crucifix designed specially for the space by sculptor Ivan Mestrovic.

History Made There: When Stanford first opened, it received attention for its in-dorm study halls and television lounges, which were an innovation at the time.

Lore: Stanford officially consists of four floors. There is, however, a room No. 500, accessible only by the stairwell that leads to the roof. The actual contents of the room are unknown to residents, and students may not live there, but it is a favorite prank-choice among residents during annual spring room picks. Several years ago, Stanford was banned from the North Dining Hall after an especially rowdy meal involving a food fight. For a full semester, all Stanford men had to walk to South Dining Hall for every meal, a relatively long hike for on-campus residents.

Traditions: Stanford’s signature event is the After Hours Benefit Bash, held each spring at the Rolfs Sports Recreation Center. Students donate $5 to participate in the late-night event, which includes a three-on-three basketball tournament, a poker tournament, music and dancing, and other activities. Since its inception in 1999, the Bash has raised more than $35,000 for orphanages in Santiago, Chile. During the Christmas season, the men of Stanford Hall participate in “Griffin Giving,” supporting local charities through donations; they also host Stanford Saint Nick Day for local underprivileged children. “Iron Grill,” a campuswide steak-grilling competition, is a popular springtime event. “Lakings” are an often uncomfortable ritual: Residents are thrown into Saint Mary’s Lake by dorm mates on their birthdays.