Government brutality in Cuba, one cause of the opposition to dictator Fulgencio Batista that prompted Fidel Castro’s rise to power in 1959, continued under the new regime. Evidence of the Revolution’s iconoclasm, which targeted symbols of the post-colonial republic’s ties to the United States, is everywhere. A statue of Cuba’s first president, Tomás Estrada Palma, was ripped from shoes that still stand on a plinth in Vedado, the core of contemporary Havana.

Not even the Cuban Telephone Company’s earnest mascot, Tonito Ring-Ring, who looked like Bob’s Big Boy’s Cuban cousin, was spared. Soon after Castro’s 26th of July movement forced Batista into permanent exile on New Year’s Eve 1958, Tonito was pried from the wall of the company’s monumental headquarters in Central Havana, marched down to the harbor and given a “burial at sea.” Two blocks away at the decommissioned Capitolio, the faces of founding fathers were rubbed out from the bronze panels that tell the republic’s story on the inside of the towering front doors. “Easy with the art!” Jorge Trelles cries out when the students share this discovery.

The destruction became personal for his wife’s family. Mari Tere’s great uncle, Felix Cabarrocas, revered today as one of the island’s most accomplished architects, died in 1961. His funeral cortege processed down the Malecón, the parkway that shapes Havana’s waterfront. When the casket approached the monument he designed in 1924 to honor the victims of the 1898 sinking of the USS Maine in Havana’s harbor, police stopped traffic. As Jorge tells it, “Fidel chooses that day to rip the eagle off.” Like Tonito, the eagle was tossed into the ocean, “so that his whole family would see the desecration of the monument.” But he keeps the malice in perspective. “Those stories are light compared to . . . the firing squads, the killings. There were no scruples. The revolution was ruthless.”

Notre Dame’s first student to graduate with an architecture degree is among its most distinguished.

By age 30, Eugenio Rayneri Piedra, class of 1904, had won an international competition for his design of Cuba’s Presidential Palace. He would become the founder and first president of the Cuban Society of Architects. But his signal contribution to world architecture was his work as technical architect on the Capitolio, completed in 1929, the masterpiece of the generation that built the University of Havana’s modern campus and the Malecón — the esplanade and seawall that hugs Havana’s shore — along with other urban celebrations of Cuban liberty.

Too often the Capitolio is described as a replica of the U.S. Capitol in Washington, D.C., which slights its originality and epic craftsmanship. Visitors may notice one difference when they see the outside of its cupola from several places inside the building, where literally hundreds of lightwells and full courtyards provide illumination, ventilation and those breathtaking views.

Felix Cabarrocas’ firm provided early concepts and designs. “It needed a legion of the very best architects to be built,” the notable Cuban architect Julio César Pérez informs us — not to mention sculptors, painters, furniture makers, lamp designers and other artists.

Rayneri Piedra was responsible for much of the building’s interior, which already has been closed to the public for a year. Our guide, the distinguished restoration architect Jaime Rodriguez, is supervising the gargantuan task of preserving the building and grounds that will take at least another five. After introductory remarks and a warning to look out for roosting bats and other wild animals, Rodriguez and his colleagues lead us up a sweeping staircase beneath a barrel-vaulted ceiling that triggers my vertigo.

Inside the darkened chambers of the House Speaker we find unblemished Napoleonic furnishings. Narrow stairs lead us up to the Speaker’s podium and the House itself, past locked doors that conceal a private toilet and a shower with body sprays, “which we are coming to appreciate,” Luis says dryly. “In 1929, the building’s equipped with the latest.”

We pass security guards lurking in the shadows of inner corridors and finally disturb the privacy of a calico cat, which sidesteps us out a window onto the low ledge of a lightwell.

Nothing prepares us for the ceremonial Hall of Lost Steps. A replica of the 25-carat diamond once embedded in the floor marks the centerpoint of the dome above us, but the real stunner is the colossal bronze Statue of the Republic, reportedly the world’s third tallest statue under roof. “It’s kind of overwhelming,” says Stephen Zepeda, the student who chose the Capitolio for his pictorial essay. “I want to be able to know everything about the building now, but there’s not enough time.” Even taking pictures is a challenge. “Zoom in, and you get some cool details,” he says. “You miss how it fits, but then you can’t zoom out far enough to get the whole space.”

We have five minutes to explore Mercado Unico lest we risk missing our flight to Miami.

The Unico was never the urban glory the Tacón once was, but today signs of its decay are everywhere. Most of the mezzanine windows are broken and three of the four halls that front the busy surrounding streets are unused. The muddy courtyard is piled with stone and debris.

But inside that fourth hall on a Wednesday morning, the joint is jumpin’. Vendors eye potential customers from behind tables piled with everything from coconuts to pigs’ heads. Neighbors greet each other while filling their sacks with candies, green onions or bags of beans. Everyone seems to be arguing, but Luis assures me this is just normal conversation.

Grander markets than this one are integral to Havana’s history. Market buildings were a unique form that stylishly housed commercial activity within whole city blocks just as they had in European cities back to the days of the Roman republic. The Tacón anchored a bustling neighborhood near the Capitolio and was home to numerous families who lived in apartments above the street. Market buildings defined public space both inside and outside themselves, which makes them perfect subjects for students thinking through the collective problems of architecture and urban design, explains Ian Manire, the student who is analyzing the old Tacón and who will use what he learns to produce his proposal for a new structure on the site.

Nowadays, he says, “It’s a lost form. It doesn’t exist. Not many probably have been built even post-1900.”

The Trelleses feel the assignment is valuable for other reasons, too. Havana has a surplus of unused ground-floor commercial space that could be renovated, but a proposal for a new market packs a real symbolic — and potentially practical — punch.

“The market has always been a public building, an effort on the part of the government to provide infrastructure for the small agricultural business where people can count on finding them on a daily basis,” Luis explains.

“And now that private business is emerging in Cuba, this may actually be very timely as a project for consideration.”

Havana’s historian couldn’t restore the whole city for all the money in Cuba. “People in the government found it important to hold on to this,” Jorge observes on our stroll through the old city. “The rest of the city’s crumbling.”

Demolition is an inevitable part of the future, but it need not mean the city’s demise. “Nine out of 10 projects that we do, we begin with a demolition,” the architect explains.

Still, students of classical architecture and urban design get anxious about the creeping modernism, sprawl and big-box construction they believe have marred cities throughout the United States and Latin America. Drawing from their professional experience, the Trelles brothers encourage them to take up what Luis calls the “challenge to make something great in our own time.

“There’s no question in my mind that that’s going to happen in Central Havana,” he says. “So much of it is in desperate need of renewal and only a portion of it will be worthy of the investment. The other parts are going to have to be started from scratch.”

After a thoughtful pause, he adds: “I’d be very happy to contribute to that era.”

Stacey Philliber started with little more than a sketch of a section of her building drawn on a standard 8½-by-11-inch sheet of paper and later came across some old photographs. That’s all she could find in the resources available to her in the United States. But by the time we arrive in Havana, she’s begun elaborating that into a cross-section of the building’s full elevation in a drawing about 42 inches tall. Not a bad pre-visit fortnight for any architecture student flying blind, but then Philliber didn’t choose just any 10-story building with a tower on top. This is Leonardo Morales’ Cuban Telephone Company building, the 1920s Spanish Plateresque masterpiece of a man revered by his professional descendants as one of the best Cuban architects of all time.

Plateresque means “in the manner of a silversmith,” and Morales delicately dressed his building — down to its terra cotta cornices and balustrades — in dragons and eagles, a reference to the major streets that intersect at the site, Dragones and Aguilas.

Philliber doesn’t meet her building until the evening before we leave, but she’s able to visit its grand foyer and mezzanine and make sketches and photographs from the roof of a building across the street. She likes the mystery and guesswork that will go into her overall re-creation of the building’s design as well as her close-up study of its window systems and how they fit into Morales’ steel, brick and stucco walls. “You’re learning from someone else per se, but you don’t have all the information so you really have to think it through and figure out how they would have done it.

“I think that in particular will be helpful when we need to shift and think about these things [for our own designs]. We’re learning to ask the questions of what we know and don’t know.”

While his classmates each selected a single building for study, student Christopher Whelan’s job is to tie them all together in a site plan. After two days of criss-crossing Havana, the features he says are most important are the ubiquitous columns and the carefully designed streets. “After walking the streets and sweating a lot, you really appreciate these arcades,” he says. “On a map you can’t really tell how big these things are, how wide these things are, how tall they are. If there’s some way I can explain it in a two-dimensional site plan, I would love to try.”

Many site plans convey a city’s layout in simple black and white, but Whelan says that won’t do for Havana. “Color is a very important part of this city. I don’t want it to be monochromatic. I want it to have some life, some feeling.” 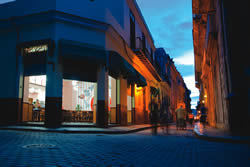 Havana is relatively safe at night despite being poorly lit. “The city is a disaster when it comes to lighting. Have you noticed?” Luis asks. “You walk around those parts of the Capitol and the lights are all out. And there’s only one or two occasional . . . bright lights. The place deserves the lower-level light that’s more consistently illuminated, like all great cities.” Jorge agrees. “They have a lot of work to do.”

“A very wise feature of Havana’s urbanism is the proportions between the height and the width of the street that help you to be sheltered,” Cuban architect Julio César Pérez points out to the students. “If you’re walking in Havana, you see that half the street at least is always shaded.”

What’s the value of a pricey visit to Rome or Havana? Student Joel VanderWeele explains. “You can’t understand a city without being there,” he says. “Maps and diagrams and pictures can do a lot, but there’s something spatial and something human about actually being in a place.”