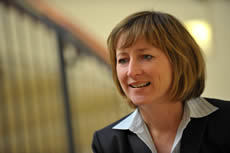 A few weeks ago as I walked across the Notre Dame campus to meet Ann Tenbrunsel for lunch, I kept thinking, “How could things have gone so wrong? What a predicament we’re in.” On one level, I know the answer, but on another, like most folks, I’m clueless.

Earlier in the day I made the mistake of checking my 401(k) balance. The numbers, I suspect, are a lot like yours: not good. So I was looking forward to getting the management professor’s take on the economic meltdown and other topics of interest. She couldn’t boost my savings, I knew, but perhaps she’d help me understand our current fix a bit more.

When the subject of our economic mess comes up, she gives a knowing smile. “Years ago I told people I was going to write an article titled, ‘Wall Street Made Me Do It,’” Tenbrunsel says. “The problem is we’ve all been living under this unspoken assumption that companies can always grow 25 percent every year. Underlying everything was this driving assumption that growth would always increase. The market would always go up, home values would always rise.

“Unfortunately, all those high expectations led companies and individuals to do some risky things to meet those expectations. A lot of poor decisions were made by a lot of people.”

Tenbrunsel knows a lot about faulty decisions. The professor of management, who joined the Notre Dame faculty in 1995, has spent a good chunk of her career examining how things go wrong, how good people wind up making bad decisions. An authority on negotiations, she is intrigued by the tension between power, decision-making and ethics.

The economic meltdown offers a classic example of how decisions go bad when people are unaware of the assumptions driving them, she says.

“In the beginning these financial companies may have been offering mortgages that were just under the border of acceptable risk. And, on net, because of increasing real estate values, that was working. Then you change the standard and go down another notch and another. Eventually that strategy no longer works because the risk has become too great, but each step has been incrementally tiny and therefore acceptable. But in the end all those tiny steps add up to a larger risk than you may have originally been comfortable taking.”

“So while you’d never think of jumping from A to Z directly, you get there eventually by going from A to B to C,” I observe, congratulating myself on not being so clueless after all.

Leaders are especially vulnerable to errors in judgment, she tells me, ironically because of the qualities that fuel their climb to leadership: self-assurance and decisiveness. She points out that numerous studies have shown that leaders overestimate their own power and ability while underestimating that of their rivals.

Also, she says, despite the fact that the higher up the command chain, the less accurate the information leaders have, they believe they know all the answers. At the same time, leaders tend to have an unwavering confidence in their own rightness. And that, Tenbrunsel notes, is when they get themselves and their organizations in trouble.

For all those reasons she believes that behind every successful leader there must be a devil’s advocate. An organization that does not foster devil’s advocates is unlikely to engage in internal debate and likely to be the victim of bad decisions, she argues.

“Instead of debate, what gets perpetuated is ‘groupthink,’” she says. “Without forethought people adopt a set of unarticulated values, and not much good comes of that.”

If you’re ever confronted with an ethical dilemma, but no one is available to serve as devil’s advocate, Tenbrunsel says just look to your mother. It turns out Mom is the best virtual devil’s advocate on the planet.

“I tell my students, ‘Ask yourself if you’d be comfortable telling your mom about the point in question. If the answer is ‘no,’ that’s a bad sign, a stop sign. It’ll save you from doing something you’d regret later.”

The Golden Rule provides another excellent virtual devil’s advocate, she says. “Ask yourself if the act were done to you, how would you feel about it? If you’d be upset and think you’re being treated unfairly, chances are there’s something ethically wrong with the decision.

“Most people tend to believe they’re more ethical than they really are,” the management professor adds. “We engage in all sorts of behaviors like memory revision or projection that protect our self-image and muddy the water. If you’re not transparent about your motivations, you can fool yourself and others and hide unethical behavior.”

Another stumbling block to doing the right thing is the concept known as “bounded ethicality,” she says. “By that, I mean as much as I’d like to think through all the consequences of a decision, I have a finite capacity for taking in information, for weighing it. Also, we all have our biases. So it’s really hard for me to empathize, to project myself into you because I am who I am, and despite our best intentions we sometimes unknowingly act unethically.

“The problem,” she continues, “is I may not even know I need to be empathetic because I assume you’re me. That you share my view. Until I become exposed to you and understand that you’re coming from a totally different perspective, I don’t even know I need to have empathy. Only when I become aware can I try to understand the problem from your point of view, and then we can see what we can do to fix the problem.”

She pauses. “It all keeps getting back to respect.” For her, respect is the bedrock securing accurate feedback. “If there is respect for every person and idea, then people feel free to express themselves honestly. The process will be just and true because everyone is able to freely give voice to their ideas. The outcome in that atmosphere will be a lot better because all sides of an issue are more likely to be heard.”

“Right,” I interject. “But if there are strongly held views and the debate becomes contentious in the heat of the moment, people often go into attack mode and respect goes out the window.”

“That’s true,” she agrees. “But it’s unfortunate, because once I go on attack my goal changes from coming up with the best solution to just protecting myself.”

Respect and dignity are absolutely essential for leaders, Tenbrunsel insists. She says it’s especially true in negotiations. “When I teach my course on negotiations, I tell my students that the core of a person’s self-interest is to be treated with respect and dignity. If you violate that, if something bad has happened between you and the person with whom you’re negotiating, they will fight you tooth-and-nail until you deal with the issue between you.

“I’m not saying you need to unjustly assume blame to advance the negotiation, but you have to acknowledge the situation. You might say, ‘I’m sorry we find ourselves in this predicament. I certainly wish it were different.’ By at least acknowledging the issue, you show respect and that makes resolving our mutual interests easier.”

Tenbrunsel, who is co-director of the Institute for Ethical Business Worldwide in ND’s Mendoza College of Business, is especially intrigued with “ethical fading,” which she defines as that peculiar mind-bending behavior people engage in that allows them to act in a self-serving way while believing they are adhering to their moral principals.

In many cases ethics fade because they are removed from the get-go, she says. Often business decisions are never examined ethically because they are viewed merely as pragmatic business judgments. In the technical parlance, they are not “coded” as an ethical decision.

“If I code something as a financial decision, the ethics are gone, out of the equation,” Tenbrunsel says. “The need to apply ethical principles becomes irrelevant.”

Ethics can fade from consideration simply by changing the words used to describe the situation. “So if ‘firing’ is now called ‘right-sizing,’ there is no ethical tension,” she points out. “Cooking the books becomes ‘creative accounting.’ Subtle changes like this can bring ethics to the forefront or take them out of the picture.”

As I leave Tenbrunsel and walk back to my office, I keep wishing that people like the subprime bankers had taken her course — and her lessons — to heart.