Cameasha Turner has always known she wanted to be a lawyer — to help people like her father, who, since before Cameasha was born, has been serving a life sentence for a crime that she says he didn’t commit.

“Growing up, I was like, ‘Man, this can’t be right. How could this happen?’” Turner says. “So I would always be like, ‘I want to go to law school. I want to get my dad out of prison.’ Of course, as life went on, it became about so much more than my dad…but I always told myself I wanted better. I want to fight that good fight.” 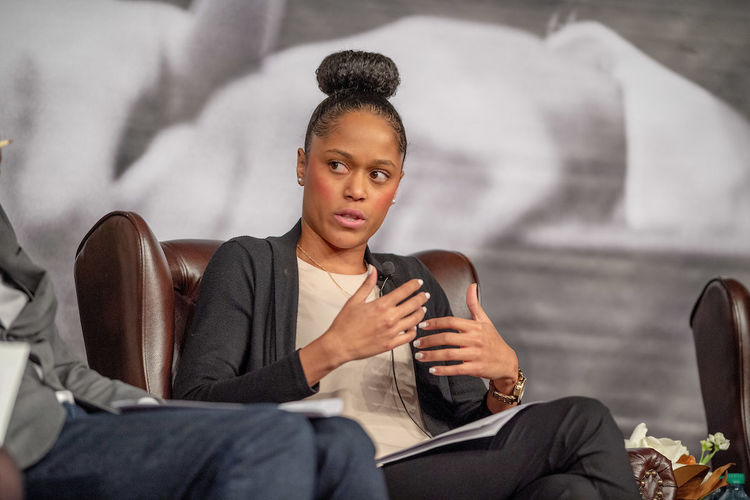 The Dallas native is now in her final semester of law school at Notre Dame, where her commitment to civil rights recently earned her a spot on the speaker list for the University’s 2019 Martin Luther King Jr. Day celebrations.

Turner was one of two student representatives on the seven-person MLK Celebration Luncheon panel, which, on Monday, January 21, discussed issues of diversity and inclusion before a crowd of 3,000-plus students, faculty and staff in a jam-packed Joyce Center. The appearance was the latest in a long line of impressive academic feats for the law student and Farley Hall assistant rector.

“I learned at a very young age that grades were so important,” she says.

With the goal of college — she would be the first in her family to attend — and law school always in mind, she applied that early lesson, graduating as valedictorian of her high school class in 2012 and moving on to the University of Texas at El Paso, where she studied criminal justice and played point guard on the women’s basketball team. At UTEP, she earned a 4.0 and, in 2016, was named a finalist for NCAA Woman of the Year.

By her senior year, many of the country’s top law schools had come calling. She chose Notre Dame because admissions counselors made her feel valued as a person, she says, and not simply as one of hundreds of recruits. But, when we met for coffee last week, she admitted — as the MLK panel had — that the University has work to do when it comes to making black students like her feel welcome.

It came up during the panel that a recent survey found that nearly half the student body had experienced adverse treatment at Notre Dame due to some aspect of their identity, from race to political affiliation. Though the news elicited shock in the JACC, Turner and I agreed that the numbers seemed believable.

“If students were honest, it probably would have been even [higher] than that,” she says. “And I took the survey. I was one of those 47% of students who said, ‘No, this campus is not doing a great job.’”

She acknowledged that intentions are good around campus, but that the reality remains challenging for students of color.

“It’s hard to feel a sense of belonging here at Notre Dame,” she says. “And I mean, I feel like I can say this because I know who I am and I know who my friends are — we try so hard. It’s not like we’re fighting against what the campus is trying to do. We’re here. We’re trying to engage other students.”

Turner says increasing the number of African-American students is one issue — the student body is just 3.5% black, according to Deloitte’s DataUSA statistics — but making them feel accepted once they get here is an even greater challenge.

“This is a microcosm of bigger social issues,” she says. “We feel like that on a grand scale — like we can’t be black, we can’t be Hispanic, we can’t be ourselves without someone saying we don’t deserve to be here.

“So Notre Dame [needs to think about] how to make students feel like they belong before they get here, and then when they get here, providing them with those resources.”

Resources, she says, can take a variety of forms — from financial aid to diverse faculty to simple things like a hairstylist in the student beauty salon who can cut black hair.

Steps like these not only improve the quality of life for students of color; they also provide a tool that many white people, at Notre Dame and in society at large, take for granted: confidants and peers in your circle who’ve been through the same things that you have.

“I have great mentors at Notre Dame,” Turner says, “but I can’t tell you that I have a great black mentor. I can’t tell you that. That’s not my experience. And though I love my mentors, there’s nothing like being able to have this conversation, of what it means to be a black woman, with another black person.”

To bring in these critically important mentors, classmates, and roommates, Turner says that Notre Dame must be proactive. She likens our situation to that of big law. Fortune 500 companies, she says, are beginning to refuse to do business with law firms that aren’t diverse, meaning that the country’s major law firms have had to adopt new racial quotas to keep themselves afloat. We don’t have that pressure at Notre Dame — which means that the motivation has to come from within.

I mentioned that, in my work in this magazine’s archives, I have found stories from before Cameasha and I were even born that lay out many of the same problems that nonwhite students still face today. Steps are being made every day in the right direction — just look at the Columbus murals — but to truly turn things around, Turner says, urgent, committed action is required.

“In order for racism to persist, you don’t need overt bigotry,” she says. “You don’t need blatant racism. You just need indifference toward someone who’s different from you. Right? You need an unwillingness to admit that we have a problem.”

Notre Dame has admitted — in a keynote panel in front of 3,000 people — that we have a problem with diversity. The task now is to solve it.